Myrtle Beach Bowl to debut in 2020 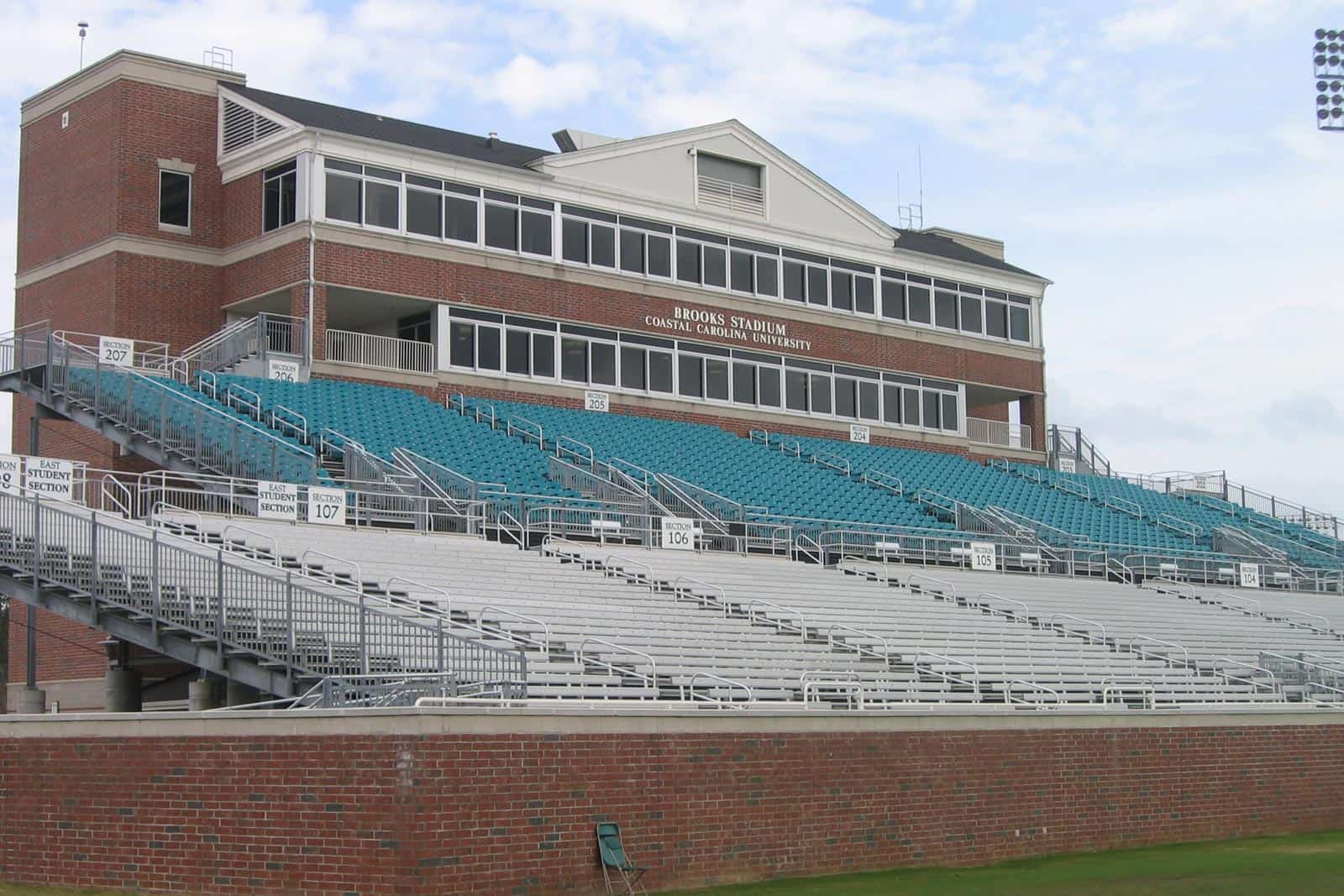 The Myrtle Beach Bowl has been added to ESPN’s roster of bowl games beginning in 2020, the network announced on Tuesday.

The bowl will features three conference partners: Conference USA, Mid-American Conference (MAC), and Sun Belt Conference. Each conference will participate in the bowl up to four times between 2020 and 2025.

“We are pleased to bring post season college football to the greater Myrtle Beach area and are thrilled to have representation from three of our conference partners; Conference USA, MAC and Sun Belt,” said Pete Derzis, ESPN senior vice president of college sports programming and ESPN Events. “With the inaugural Myrtle Beach Basketball Invitational taking place this week, the addition of this bowl game brings yet another opportunity to showcase all that Myrtle Beach has to offer.”

The Myrtle Beach Bowl will be played at Brooks Stadium on the campus of Coastal Carolina University in Conway, South Carolina. Brooks Stadium currently has a seating capacity of 15,000, but Phase II of its renovation will expand capacity to over 20,000.

‘We are honored to be a part of history in establishing the first bowl game in the state of South Carolina,” said Matt Hogue, Vice President for Intercollegiate Athletics at Coastal Carolina University. “The brand impact for our University from this game and the excitement of college football during the bowl season will be immeasurable and represents another example of how important sports tourism is to the promotion of our region.”

The inaugural Myrtle Beach Bowl will be played prior to Christmas in 2020, and future dates will be determined later. A sponsor will also be named later and Myrtle Beach will reportedly be part of the name.

With the addition of the Myrtle Beach Bowls and no other bowls being added or dropped, there will be 40 bowl games in 2020, not including the College Football National Championship. That means that 61.5% of the 130 FBS schools will play in a bowl came following the 2020 season.

Because we needed another bowl game ?

At this point, what’s another bucket of water tossed into the ocean?

Seems like 80 teams playing in the post season is a lot. It will get worse when the CFP expands to 8 teams.

Have visited Brooks Stadium…….Nice, FCS-sized ballpark (which CCU used to be)…..I am sure they will draw
4,000-5,000 to show up a week or two before Christmas to see two second-level also-rans from these three conferences face off. Some nice background noise while putting up the Christmas tree.

Not sure about Bowls from other areas but the five Bowls with Sun Belt tie-in’s average 20,000+ in attendance. Not NY6 level attendance but still a heck of a lot more then what you are trying to push.

I would rather listen to Christmas music than have the Who Give’s A Rat”s Ass Bowl on in the background.
Will all of the players get certificates of participation and orange slices at the end of the game like my 9 year son gets aftera soccer game?

Oh Great another stupid bowl game that nobody cares about. I love football but this is ridiculous ESPN will not stop until they overexpose football and ruin it. I wish they would go broke

stop whining about too many bowls
NOBODY IS MAKING YOU WATCH!!!!!

1. Though people on this thread have spoken highly on CCU’s stadium, it looks like a glorified high school stadium in the picture.

2. I think the playoff committee or whomever picks the site of the Championship game, should publicly state it will not put the game in Metro area that already has more than one bowl game. This would eliminate the Boca Raton, 2 of the Orlando bowls, the St. Petersburg bowl, the New Orleans Bowl, 3 of the bowls in the Dallas area, and the Arizona Bowl. This would reduce the number of bowl games by 9 and make it somewhat of a true reward for a winning season. This would eliminate many of the 6-6 teams making a bowl and at least make it a reward for a winning season.

3. The university presidents need to stop giving coaches bonuses for making a bowl game. The bonuses should be paid for winning seasons and bowl game wins.

4. These sponsors of bowl games should work to get some of their bowl games to be neutral site regular season games. How many more people would go to an October match-up of UCF vs. an SEC or ACC team at a game called the Cure Bowl, rather than the actual Cure Bowl between a Sunbelt and MAC team. My guess is the Cure Bowl will get 20k in a 65k seat stadium, while my proposed match-up would get twice the crowd

Bowl games with a “local school tie-in” aren’t a bad idea. Given the driving proximity for a number of MAC, Sun Belt, and CUSA schools this is a reasonable spot. (Because, who’s *driving* to the Bahamas?) Prediction, Coastal Carolina and “in range” schools such as Georgia Southern, App State, Charlotte, ODU, and ECU often will end up at this bowl.

Really, another bowl game? We do need a 40th bowl game, and Conway, SC is not Myrtle Beach (20 more miles down 501 will get you to Myrtle Beach. We also do not need another corporate tie in, but that is coming as well. Please make bowl games more special by having fewer of them. 30 would be nice round number of bowl games.

So what is the status of the following three bowls which were previously licensed but put on hold?
Chicago (Wrigley)
Austin
Charleston (Medal of Honor)

And what is the word on the proposed bowls in Australia and Little Rock? They were not licensed, but not announced that they down for the count.

No updated status on any of those bowls.

Why do people care so much about bowl games?

It’s a bowl game for teams that might not get a bowl game. It’s programming for ESPN. It doesn’t matter who shows up, it’s about sponsorships and TV revenue. That’s why the bowl committee isn’t going to go around strong arming cities about how many bowls they host. It doesn’t matter. You think if the playoff committee came out and held the championship game in Myrtle Beach nobody is going to show up?

If you only care about the big bowls, good for you. But it’s not about just you and what you like. Quit acting like a snowflake.

A lot of these bowls only appeal to the teams they host. They get it. I get it. Seems everyone gets it except everyone on message boards who complain when they add a new one.

This just puts more teams with losing records in bowl games but thats ok. “Our” team went to a bowl game has no meaning anymore. Like someone else said, this is Conway, SC, not Myrtle Beach.

It has plenty of meaning. You think that because there is a Myrtle Beach bowl, going to the Sugar Bowl won’t matter? That’s ridiculous logic.

It means something to the coaches, players & school. By the way, there is not ONE team going bowling this year that has a losing record.