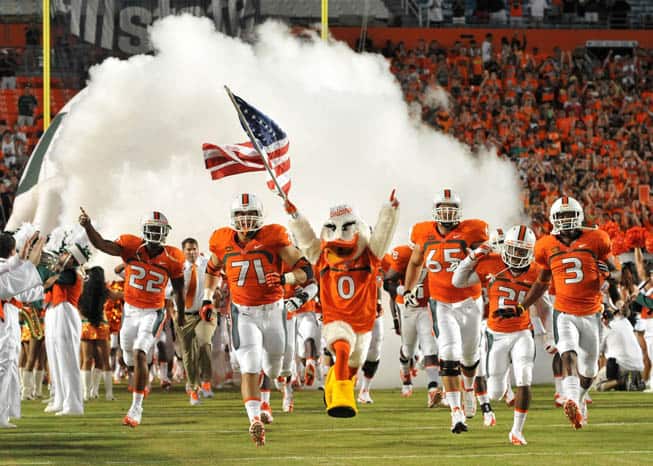 What a fantastic opening slate of games to start the season off during Labor Day weekend. From the Ole Miss stunner late at Vandy to Washington’s complete dominance of Boise State, this weekend was a reminder of what makes college football so special.

One of the more notable takeaways from the weekend were the eight victories by FCS schools over FBS programs, none of which was bigger than Eastern Washington taking down #25 Oregon State. South Dakota State’s last-minute win over Kansas State and McNeese State’s total humiliation of South Florida on the road are great reminders of why you can never look at a school’s schedule in the summer and count those FCS matchups as automatic wins.

Take heed from the four other FBS programs that lost to their lower-division brothers (Iowa State, Kansas State, San Diego State, UConn, South Alabama). With 35 FBS/FCS games this weekend, your school could be the next to cut a smaller program a huge paycheck only to watch them walk out the door with the money and a victory – we’re looking at you Kansas.

For this week, the pickings are a bit slimmer than opening weekend regarding marquee match-ups, but let’s take a look at the most anticipated college football games of week two, including our Under the Radar selection.

The fact that this game will be played during lunch on the east coach and breakfast on the west instead of during prime time shows how this in-state match-up of historic powers has faded a bit over the past few years. Don’t let the time slot fool you; this is a critical non-conference game for each squad.

For Florida, it will be interesting to see how Jeff Driskel follows up his 17/22 performance versus Toledo when he faces a much quicker and athletic Miami defense. The Hurricanes play their second straight home game versus an in-state school, having routed Florida Atlantic last weekend behind the legs of running back Duke Johnson who averaged 9.6 yard per carry against the Owls.

The Gators and Hurricanes should each have a better feel for where they stand in the national picture after this game.

This week’s Under the Radar selection features Western Kentucky traveling to Knoxville in an attempt to knock off a second straight SEC opponent. Say what you want about Kentucky, but the Hilltoppers still put up nearly 500 yards of offense versus an SEC defense.

On the other side of the ball, it’s difficult to know what to make of the Vols after they hammered FCS squad Austin Peay. What we do know is that the 102,455 faithful on hand this Saturday won’t take too kindly to losing to a Sun Belt squad. Just one of the reasons this game deserve a bit more exposure nationally than its regional broadcast.

Before more Georgia fans call into local radio shows in tears while demanding that Mark Richt be fired, think back to 2011. The Bulldogs opened with losses to Boise State and South Carolina. Not only did the heavens not fall, but Georgia ran off 10 straight wins to make it to the Southeastern Conference Championship Game.

If you’re South Carolina, you have to feel good about the week 1 performance against North Carolina and the current four game winning streak versus Georgia dating back to September of 2009. If Connor Shaw can stay away from costly interceptions – especially early when the hometown Dawgs fans will be going nuts – the Gamecocks could find themselves with a fifth straight win in the series.

The case can be made that this match-up should be left off the list due to West Virginia’s lackluster opener at home to William & Mary last weekend. We’ll give them the benefit of the doubt this time and chalk it up to rust and attempting to identify a new quarterback. The Mountaineers may have done just that thanks to the steadfast performance of Paul Millard (19/25, 237, 1 TD).

Oklahoma broke in a new QB of their own last weekend as redshirt freshman Trevor Knight did just as much with his legs (103 yards rushing) as he did with his arm (86 yards passing) in a shutout win over ULM. Considering West Virginia’s recent history of leaving receivers wide open in the secondary – a trend that continued last week against the Tribe – Knight may have his first chance to explode in the passing game.

The Notre Dame defense got a bit more than it expected last week in its opener at home versus Temple. If the Owls had any semblance of a kicking game, the score would have been even closer than the 28-6 final.

Someone who was more than ready for the first game, however, was Tommy Rees. The fodder for sports talk radio put up 346 yards, 3 touchdowns, and no interceptions on Saturday.

Michigan is coming off a season opening 59-9 in-state thrashing of Central Michigan in which the defense came away with 3 turnovers. Watching to see if the Wolverines can hand Rees his first pick of the year will go a long way in determining who will win what should be a close contest under the lights in Ann Arbor.

Least anticipated game: Boise State hosting UT-Martin. As of today, there are 8,000 unsold tickets for this non televised game. In a stadium that seats 36,000, this could be the smallest home attendance in Boise in 8 years with less than 30,000 attending. Fair weather Boise fans are showing their displeasure with scheduling unattractive non league opponents and lackluster play on the field.

I came so incredibly close to including that game Douglas. If this list had been 6, that would have been the game to include.

For the GA/SC game the loser of that matchup if SC cannot afford another conference loss, same goes for GA with LSU & FL on their schedule and trip to Auburn which is not easy to win at Jordan Hare, plus for GA that would put them at 2 losses and a shot at the National Championship game pretty much out of the picture. SC also has to go to Arkansas, and also has Fl on their schedule so both cannot afford whoever loses this match to have anymore speed bumps on their schedules as 2 losses in conference would make it very difficult to make it to Atlanta. This may be the year with the East so loaded & West that teams may have 2 league losses heading into Atlanta and National Title hopes not looking so good.

Bobby Petrino cant even rid a motorcycle straight/maybe his mistress had something to do with the accident. Tennessee37/Western Ky 10.