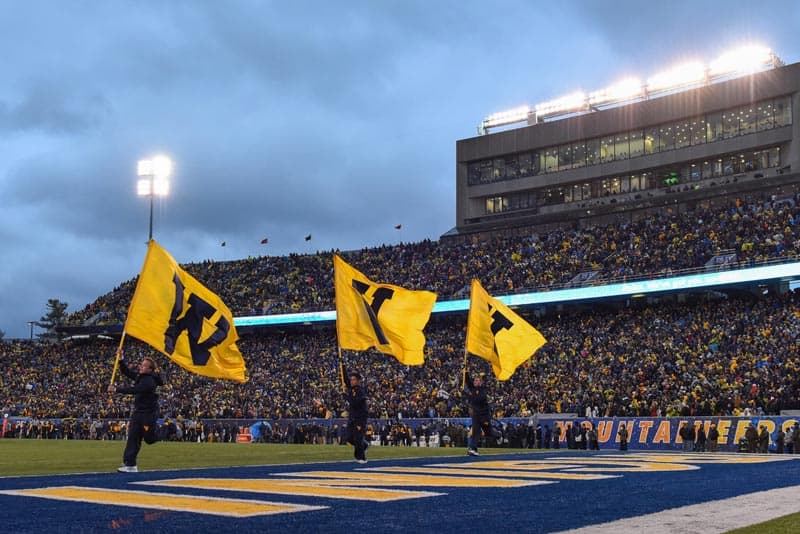 The West Virginia Mountaineers and the Missouri Tigers have scheduled a home-and-home football series for 2016 and 2019, both schools announced today.

News of the future future football series was first reported yesterday by the Charleston Daily Mail.

In the first game of the series, West Virginia will host Missouri at Mountaineer Field in Morgantown in the season-opener on Sept. 3, 2016. Three years later, the Mountaineers will travel to take on the Tigers at Faurot Field in Columbia on Sept. 7, 2019.

“We are very pleased to add a team the caliber of West Virginia to our schedule,” said Mizzou Executive Associate Athletic Director Bryan Maggard, who oversees football scheduling. “We feel like this is a game that is appealing to the fan bases of both programs, and it helps us both add high-profile non-conference games to our schedules. We’re excited to have a chance to work together, and appreciate everyone coming together to make this happen on all sides.”

West Virginia and Missouri have met five times on the gridiron dating back to 1926. Missouri won the last meeting 34-31 in the 1998 Insight.com Bowl to take a 3-2 lead in the series.

“I believe this home-and-home series with Missouri will be great for both schools,” West Virginia Director of Athletics Oliver Luck said. “Each program will benefit from playing a non-conference game against a team from a highly visible conference, and the fans will be entertained from what I think will be two highly competitive games.”

The addition of West Virginia gives Missouri their first announced non-conference opponent for the 2016 season. It also fulfills Mizzou’s strength of schedule mandate for that season and 2019. The mandate stipulates that each SEC team play at least one non-conference game against another power five team.

West Virginia has now tentatively completed their non-conference schedule for the 2016 season. The Mountaineers are slated to host Youngstown State on Sept. 10 and BYU on Sept. 24 (at FedExField).

Sounds OK to me……..would make more sense if Missouri were still in the Big-12, and if W Va. were in the AAC…….

Any word on scheduling a Pitt-WV home-and-home series?

With this announce only five more P5 programs are still in need of P5 OOC opponents for 2016: Missi / Miss St / Arizona / BC / Kansas St

All five programs have a tendency to schedule lightweight OOC schedules. But with SEC rule kicking in for 2016 the two Missi schools need to lineup a P5 opponent.

One of the Missi schools might be able to motivate BC to hook up, Or maybe motivate two ACC programs (e.g. Miami, NC, Syracuse, WF) to play two P5 OOC opponents in 2016?

Snyder at Kansas State prefers a weak OOC schedule on par with cross state rival Kansas. But maybe Kansas St and Ol Miss will hook up for a 2016-17 home-and-home? They need each other.

BC is in a constant sate of scheduling crisis. Still need to confirm two OOC games for 2015. AD Brad Bates may end up at Michigan before the 2015 and 2016 BC schedules are finished. (BC offical website still shows Army playing BC in 2015, but we know that’s not happening). Is the 2015 NM State-BC game still on for sure? Me thinks not.

I’d put more likelihood on a Kansas State/Miss State matching. Both are land grants, and that provides a higher level of connection (something that helped make AU/KSU happen.) BC/Ole Miss makes more sense. Baylor can have Arizona.

The DECADE the only P5 OOC games baylor has on the schedule is Duke in 2017 and 2018. This sort of scheduling is no accident by Art Briles …Cupcakes all around for baylor

The list above are those programs which still have a “TBA” on their 2016 schedules.

Anyone see the recurring cast of characters? Those programs do not earn a pass into the College Football Playoff.

Depends on how you spin it: This season Baylor, Arizona, Colorado, Oregon State played 9 P5 opponents within their conference which is equal to the total P5 games played by all of the SEC schools and most ACC and Big ten schools due to them playing 8 conference games.
This year Penn St, WF, NC St, Colorado are having rebuilding years and for the most part would just be happy to compete and maybe make a bowl game.

It would be nice if all the major conferences could agree to play the same number of conference games.

A&M had arky but since it moved to the sec it lost it. Asu next year

no, not all… as stated Missi, Miss St, and Vandy played ZERO P5 OOC programs and EIGHT SEC games.

Yeah, this would be one power conference, one thing is fact. You would have no idea who would come out the winner every year. May be three of the teams make it to a bowl, okay may be just two.

But to be able to compete week in and week out takes its toll on programs without a lot of depth, with injuries, new coaching staffs, or in re-building years.

Note some P5 programs appear to be in a perpetual state of rebuilding, which is sad.

Not that I think it could ever happen, but the point is those programs would be playing competitive games week in and week out, if they were in a conference more appropriate to their level.

Like having to take a beating in a non-conference pay day far away road game just to fund your athletic department budget.

WVU should schedule Pittsburgh, Boston College and Marshall, both schools have open dates in 2017, 2018,and 2019

ll 4 schools that is lol