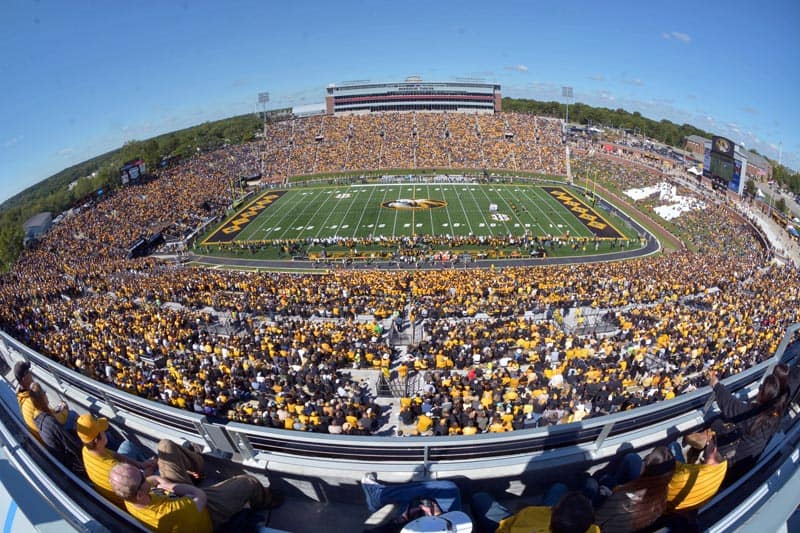 The Missouri Tigers and the UConn Huskies have scheduled a home-and-home football series for 2015 and 2017, both schools announced today.

Missouri will host the first game of the series at Faurot Field in Columbia on Sept. 19, 2015. The Tigers will then return the trip to Rentschler Field in East Hartford two seasons later on Sept. 23, 2017.

“We are very excited about playing a football series against Missouri as we continue to build a competitive non-conference schedule for our team and an exciting one for our loyal fans,” said UConn Director of Athletics Warde Manuel. “Our future football schedules have a number of games from various leagues around the country and I am happy to add Missouri and the Southeastern Conference to those contests.”

The 2015 contest will be the first ever meeting between the two schools.

“We’re really pleased to be able to reach an agreement to schedule UCONN,” said Mizzou Executive Associate Athletic Director Bryan Maggard, who oversees football scheduling. “It’s fun to bring new opponents into Columbia for our fans, and this is a program that’s had a high level of success in the past decade. One of the most challenging aspects of conference realignment has involved football scheduling, and reconstructing things after we moved to the SEC. We’re getting really close to having 2015 taken care of and being able to move on to future schedules, so that’s very exciting,” he said.

These additions complete the non-conference schedules for the Huskies in 2015 and 2017. UConn needs one more game in 2016.

Missouri now needs only one additional non-conference opponent in 2015 and two in 2017. The Tigers currently have no games announced for the 2016 season.

Eight FBS programs still needing to schedule a 2015 game against an FBS opponent :

23 additional FBS programs which still have a TBA for a game with a FCS program.

ULM is playing at Hawaii, Thanksgiving weekend next year.

It’s been reported that the Charlotte’s coach, on his weekly coach’s show this week, confirmed a game at Kentucky for 2015, but no date (possibly either the weeks of Sept 19 or 26).

Thus five FBS programs (not including Hawaii Exemption programs) still have an opening to schedule a 2015 game against an FBS opponent (unless electing to play two FCS programs):

And 25 FBS programs still have a TBA for a potential game with a FCS program.

Will the stars align and Mizzo and Miss State are able to schedule BC and Colorado, so each has a power conference game on their schedule?

Alabama still needs two games and the Tide require both be played at home. So two programs (one FBS and one FCS) will be receiving big payouts for haircuts in Tuscaloosa. Who will it be? San Diego State desperately needs a home game and for various reasons the other MWC programs will likely not be using their Hawaii exemption to make a visit.

Odds are Boston College will be visiting Alabama, Or one of the non power conference programs with a TBA for a game with an FCS opponent will take the big payout instead (e.g. Tulane, Tulsa, SMU, FIU, ULL, Texas St). And one ‘lucky’ FCS program.

Good luck to all the remaining contenders.

With Hawaii using its exemption to play UC-Davis, the Rainbow Warrior 2015 schedule is complete.

NMSU told me yesterday they are still playing BC in 2015, but didn’t provide exact date.

I doubt the rivalry game with NM or the second game of the series with UTEP, the Aggies only non-conference home game, will not be cancelled.

So either the game with Florida or Ol Miss will be cancelled. I suspect the Florida-NM St game will not be happening.