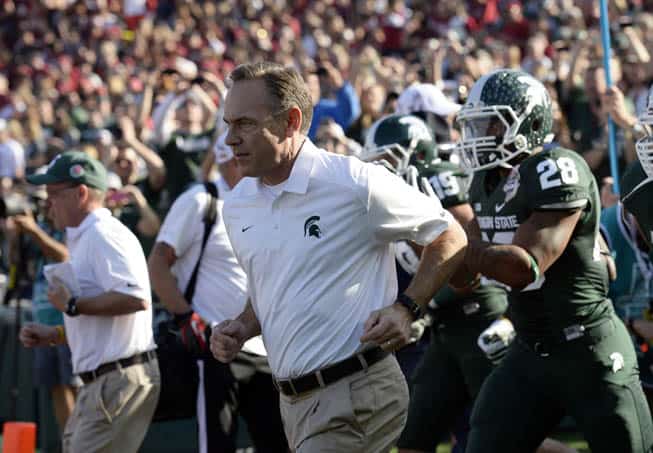 With Notre Dame agreeing to play five ACC games per season and the Big Ten expanding to nine conference games, the frequency of the Michigan State-Notre Dame football series will be diminished.

The series has spanned 77 games since 1897, and the two schools have played every season since 1997.

The next meetings between Michigan State and Notre Dame are set for 2016 at Notre Dame and 2017 in East Lansing. After that, three more games are in the planning stages.

According to a report by MLive.com, Michigan State and Notre Dame are looking at playing a neutral-site game in 2023, possibly in Chicago, followed by a home-and-home series in 2026 and 2027.

“We have the two games contracted coming up and two in the 20s that are definite (2026-2027), and then we are flexing around a few other things because of our nine-game (Big Ten league schedule) situation and their ACC situation.”

Yesterday, Michigan State announced a home-and-home series with the Arizona State Sun Devils for the 2018 and 2019 seasons. As part of that, Michigan State opted to pay a $250,000 buyout to cancel their 2018 game at USF.

“It’s something I don’t like to do, it’s not in my fiber,” Hollis said on buying out the USF game, “but to replace that (South Florida return game) with a home-and-home was a better situation for us, not only financially but to gain a home game, and because of the nine-game conference schedule, that was kind of what started that whole (buyout) process.”

Michigan State is not the only Big Ten school to buy out of a game against USF lately. Indiana has also dropped a home-and-home series with the Bulls.

Per USF, Indiana has "exercised their option to buyout the games scheduled for 2015 & 2016." No current plans to reschedule.

i always look forward to the MSU & Norte Dame game every year, it wont be the same anymore, may not watch the season, how sad :(

During my time at State, (’64-’68) the main rival WAS Notre Dame, not Michigan. It’s hard not to see them play each other every year.

i agree but the Domers are yellow belly chickens.

Chicago IS A neutral site. It’s only about 2 hours more of a drive for Spartan fans in Michigan, and from my time spent in Chicago, there are a decent amount of fans from both teams. Now if the game were in Indianapolis or Detroit, then sure, it wouldn’t really be “neutral”.

It would be neutral in Ann Arbor. The fans would be rooting for both teams to lose.