Michigan to Host Penn State in Primetime on Oct. 11 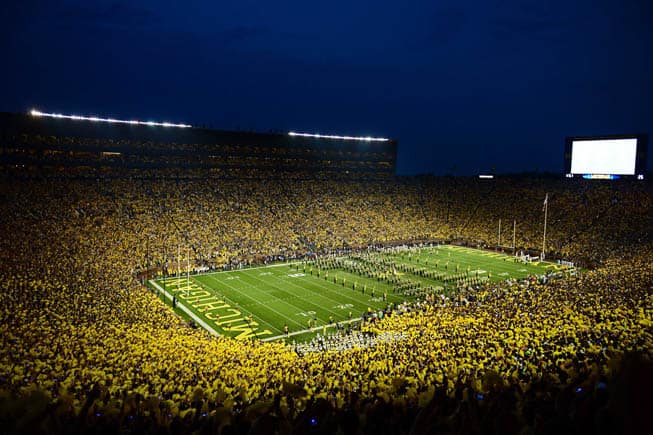 The Michigan Wolverines will host their first ever primetime Big Ten football game on Saturday, Oct. 11 against the Penn State Nittany Lions, ESPN and the Big Ten Conference have announced.

Kickoff for Michigan-Penn State is set for 7pm ET and the game will be televised by either ESPN or ESPN2. The matchup will be only the third ever night game at Michigan Stadium following primetime tilts against Notre Dame in 2011 and 2013.

“The night game atmosphere created by our fans has been electric and we expect that same type of energy for our first-ever conference night game against Penn State,” said Michigan head football coach Brady Hoke. “Our players really enjoy playing in primetime at Michigan Stadium.”

Michigan opens the 2014 season at home on Aug. 30 against Appalachian State. The Wolverines then play their first night game of the season the following week at Notre Dame (Sept. 7, 7:30pm ET, NBC).

Penn State, which will be playing their first season under new head coach James Franklin, kicks off the season on Aug. 30 against UCF in Dublin, Ireland (8:30am ET, ESPN2).

Teams like these going to one night game a year are make them a hell of event to watch on tv……..last year Notre Dame game and 2011 were amazing to see on TV I wish more and more team would do that …