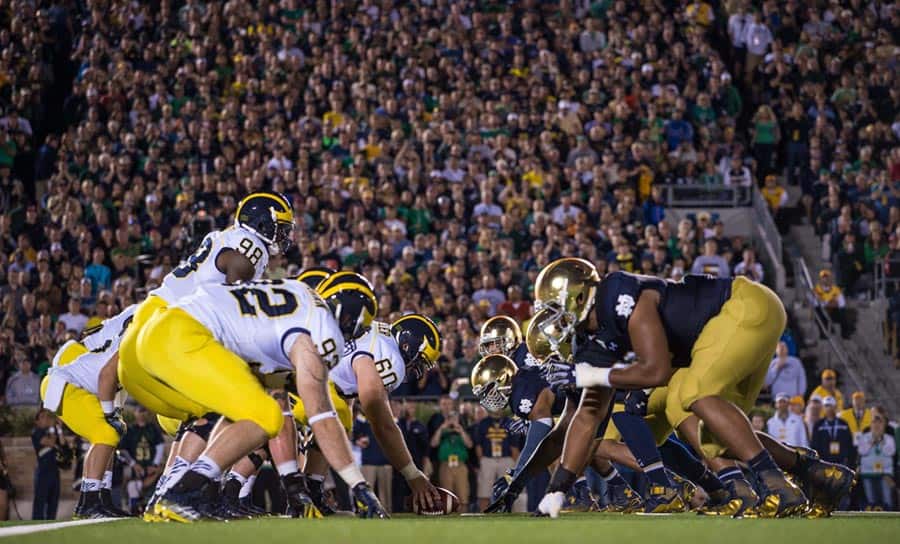 New Michigan athletic director Warde Manuel has only been on the job for just under two weeks, but he’s already weighed in on a popular topic — football scheduling.

One major opponent that is missing from Michigan’s future football schedules is the Notre Dame Fighting Irish. Back in 2012, Notre Dame canceled three remaining football games against Michigan that were scheduled for 2015 through 2017.

That cancellation, which left the Wolverines with no future games against the Irish, was primarily due to Notre Dame partnering with the ACC and agreeing to schedule five games against their conference members each season.

Today after a press conference to announce a soccer game between Chelsea and Real Madrid at Michigan Stadium, Warde Manuel was asked about the possibility of getting Notre Dame back on the Wolverines’ schedule.

Warde Manuel is more than open to scheduling Notre Dame again. Also says it's not ideal playing MSU/OSU on road in same year.

Michigan and Notre Dame last met in 2014 at Notre Dame Stadium where the Fighting Irish rolled to a 31-0 win. The two schools first met on the gridiron in 1887 and Michigan leads the overall series 24-17-1.

Warde Manuel also noted today that it’s “not ideal” for Michigan to play on the road at Michigan State and Ohio State in the same season. This began in 2014 after the Big Ten expanded to 14 teams and realigned their divisions.

Michigan has played Ohio State on the road in even years since 1904. The Wolverines had played at Michigan State in odd years since 1969, but that was changed due to the Big Ten expansion and resulted in Michigan visiting East Lansing in consecutive seasons (2013 and 2014).

It will be interesting to see if Michigan can get that scheduling imbalance changed. The current Big Ten scheduling format is set through the 2019 season.

It will be nice to see Notre Dame join the B1G. If that were ever to happen, the B1G should go after UConn.

I didn’t think Michigan was ever “closed” to scheduling Notre Dame in football. It was Notre Dame’s decision.

The rivalry is sure missed but times change.

Jim, yes, good point. I looked at the game a little different though, no matter how bad either team was it always seemed to be a big game & when they played everyone knew about it. Being two of the elite college teams, they both rank in the top five of percentage & all time wins, they also had a series that started from 1887-1909. There was so much stink from both sides that was brought up about the ending I thought they would find a way to start back playing again. So I may be wrong about it being a rivalry but in my eyes it will always be. USC & Notre Dame are not in the same state or conference yet I consider that a rivalry & yes I know they play each & every year.

This is really a one-sided rivalry, kind of like Ohio State-Penn State. Penn State’s biggest rival is Ohio State, but Ohio State and Michigan have each other, so Ohio State does not view Penn State as a rival but just another game.

Looking at history, there are many teams above Michigan on Notre Dame’s list of rivals: USC, Navy, Purdue, Michigan State, Pitt, Army, and Northwestern. Georgia Tech, Air Force, Stanford, Miami, and Boston College also rank up there. While this game matters for Michigan fans, it’s not that big of a deal for Notre Dame fans.

B.I.G should add UCONN Pitt, Syracuse and WVU. I know that Pitt and WVU are tied to the ACC and Big 12 respectfully, but if Texas and Oklahoma break up their conference by leaving for the SEC, then at least WVU can escape to the B.I.G., then hopefully Pitt and Syracuse can find a way out of the ACC?

Really? C’mon. The B1G only takes schools that fit in the CIC… this means they’re either full AAU, or like Nebraska… out of it only because of its med school not co-located in Lincoln and USDA-funded research not counted the same as NSF-funded.
Syracuse isn’t AAU any longer, and WVU’s academics? Go burn a couch. More likely would be Iowa State and Kansas picked up (if the XII breaks apart), and Pitt, UVA, and UNC are the only schools in the ACC that the B1G would be interested in.

My belief as far as realigning conferences is this. The XII is going to eventually need 12 members if they ever want to be considered champion contenders more frequently. Candidates included Cincinnati, Louisville, North Dakota State, Boise State, BYU, and Colorado State. They’ve got a lot of options, but it significantly depends on Texas willing to split their pot more with fellow members. Should this fail and XII collapses, you will most likely see these schools split between the other power conferences. I also believe that if a member of the AAC were to leave for XII, Army would take their place. The problem then becomes would the Army/Navy game be moved up early to avoid complications with championship week/play off selection week.

If BIG were to expand to 16 teams, it would either have to be two 8-team divisions, or four 4-team divisions (much like the NFL). They can play all teams from their division plus two from other divisions, OR teams in their division plus all teams from one division, plus each team that ranked equally to them from remaining two. With these commitment/departure contracts making realignment very difficult, we can only dream. But I think Notre Dame and either WVU, UConn, or Kansas/Kansas State would make great additions.

Louisville would never leave the ACC for the XII. That’s trading a Ford in for a Yugo. And again, WVU and UConn will never be in the B1G. Notre Dame? Well, in hockey, that’s now a lock. So, perhaps that reopens the door. Kansas I totally agree with you on though as a B1G candidate. They’re a top research university, they’re AAU, and they’d fit nicely in the CIC. My wildcard is Georgia Tech. AAU school, major metro in the South, easiest to reach by aircraft for traveling teams, great recruiting area for talent. If you’re picking off an ACC school… Tech is the best. Of course, until the GOR dates come up… this is all just Fantasy Conferencing.

LOL…B10 would never take WVU, Kansas/Kansas State. You’re the 2nd person who has a misunderstanding on what guides expansion. If the B10 adds any schools it will from the ACC, they have already made that clear, MD was not a one off. VA, UNC, Gtech are on their radar. UL would be stupid to leave the ACC for the B12. NO current P5 schools is leaving to go to the B12, thus the B12 prospects are AAC schools and BYU. CSU, NDSU, Boise have no chance, they don;t add enough value in markets, recruiting, etc..

Can you stop posting utter nonsense.

First your claim of other rivalries ahead of Michigan is nonsense in all cases but USC. Are you on cracl..Miami/ND played very few times. Navy is not a rivalry, a rivalry requires competiton Navy has won like 3 times in the last 40 years.

You’re nonsense about what teams conference should add shows complete ignorance on the basis of expansion. The B10 doesn;t want dead weight schools like Kansas, Kansas State, Iowa State, Missouri, and Cincinnati …They are small markets and the plain states current B12 schools are not hot beds of recruiting They add nothing.

I could keep going on the absolute goddam nonsense you mentioned on the other conferences but it would clearly be lost on you b/c you have no idea what guides expansion. Btw, no P5 ever wants AF, Nevada, UNLV, Tulane,

I know my suggestions were wishful thinking. I know they have no chance in happening (or very little at best). They make sense from geographical and rivalry perspectives, that’s it.

However, you are wrong about expansion candidates. The B1G would jump at the chance to grab a Kansas or Oklahoma, despite their media markets. A Kansas State or Oklahoma State might only get in if politics become involved. I get that the B1G wants media markets, but it’s not the only guideline it’s using. Remind me of the big media market Nebraska brought along? And you quoted UVA and UNC, which media markets do they contribute?

As for Michigan being Notre Dame’s second biggest rival, you are VERY wrong my friend. Rivalries are about more than wins and losses. So yes, Navy is a bigger rivalry as are Michigan State and Purdue, and probably even Pitt. By they way, do you realize Michigan is not that far ahead of Miami in games played against ND? Ask any Notre Dame alum, they don’t care about this game!!! Only Michigan fans and alums do!

Lastly, you are the one insulting others and getting all upset acting like the post police. Perhaps you are the one smoking crack (since you can’t even spell it). Dude, if you can’t handle the conversation here with respect, then maybe YOU shouldn’t read or post here.

Notre Dame does not want anything to do with Michigan. They dropped Michigan, not the other way around. Notre Dame is tied up to an ACC schedule till 2025. Unless they meet in a Bowl game, it won’t happen till at least then.

Ok Notre dame bandwagon, first of all Michigan has more wins against Notre dame plus more wins than any college football team in history so like the famous Michigan man himself once said, Bo Schembechler Michigan doesn’t need Notre dame, second it’s a great rivalry, people still live off of Notre dame’s tradition and history, that is not them anymore, can Notre dame really compete with the big 10 Ohio state, didn’t northwestern beat them a couple of years ago, Michigan state and now Michigan is up and coming how about Wisconsin, maybe throw in Nebraska, so Notre dame is that good right? Didn’t Ohio state beat that ass from the big 10 in a bowl game!

At least ND QBs can tie their own shoes! Better graduation rate at ND them UofM will ever have, ND doesn’t offer VCR repair 101 haha! And at the “character” stating Navy isn’t a rivalry…uh that game between ND and Navy will always happen Navy helped ND out by housing their naval officers there way back when so as a thank you ND plays them year in and year out. The list of teams wanting to play ND especially in South Bend is quite long, nationally exposure folks. College football is a lot like the NFL, it’s all about the money baby!

I see no reason why Notre Dame won’t schedule a home and home series with Michigan in the future, but the days of having annual games with ANYONE except the two West coast private schools (Southern Cal and Stanford) and Navy are over. The five annual ACC games plus games against Stanford, Southern Cal, and Navy just leave too few openings. ND will not re-start their annual series with Michigan State just like they are not going to re-start their annual series with Purdue back–both of which have a lot more history than the Michigan series. But my guess is they will play each of those schools a few times each decade. They are playing MIchigan State and play Purdue in five seasons or so. This thought that the Irish may renew this annual series with Michigan (or BC or Pitt or anyone who it has played for several years in a row) is just off base. There just aren’t enough games, and playing that series with the Wolverines isn’t important enough to them. The best you can hope for is a home and home every 8-10 years. That seems reasonable to me.