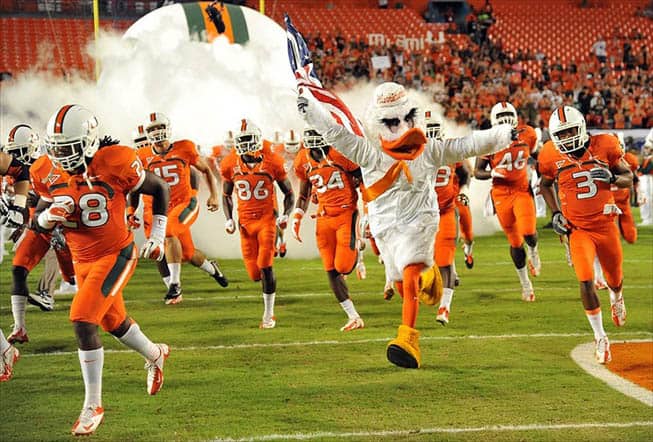 The Miami Hurricanes and the Penn State Nittany Lions are discussing a future football series, according to Barry Jackson of The Miami Herald.

“UM said it’s optimistic about finalizing a future football match-up (one or more) with Penn State, year undetermined. A neutral site is a possibility” Jackson wrote on his Wednesday Buzz.

The possibility of the series was confirmed by The Patriot News, but they indicated that a Penn State official described the talks as “preliminary.”

Penn State head coach Bill O’Brien has been trying to upgrade their future football schedules, and a report surfaced in February that the Nittany Lions are working with the Big Ten to set up a future game in Ireland.

The Nittany Lions are banned from appearing in the Big Ten Championship Game, postseason bowl games, and the upcoming four-team college football playoff until after the 2015 season.

With those restrictions in place, Penn State has been looking around for opportunities to play non-conference games in warm locations, and Florida fits that bill perfectly.

It’s important to note that Jackson did indicate that a neutral-site location for the game is also an option.

Miami has been tinkering with their future opponents ever since the ACC switched back to an eight-game conference schedule. Tentatively, they have two openings in 2014, one in 2015, and none in 2016.

Penn State has one opening in 2014 and two in 2015. However, they are slated to travel to UCF in either one of those two seasons. In 2016, they have three games scheduled, and that is also when the Big Ten will likely begin playing a nine-game conference schedule.

For both schools, 2017 and onward is essentially wide open.

Miami and Penn State haven’t met on the football field since the Hurricanes trounced the Nittany Lions 33-7 at Beaver Stadium in 2001. The overall series is tied 6-6 after taking into account Penn State vacated their win at Miami in 1999.

The “neutral site” concept isn’t a bad thing . . . provided it doesn’t end up being Philadelphia, Pittsburgh, or New York City (or, from Penn State’s perspective, not Orlando or Tampa). Last year’s UM / Notre Dame contest at “neutral” Chicago wasn’t really so neutral at all — not that Miami would have won anywhere the game might have been played. If PSU is looking for a warm-weather game, why not play at Hawaii in early December, after completing their Big 10 schedule? That trip’s as good as a bowl game, and can be done on top of a typical 12-game season, BEFORE their post-season ban ends in January 2016.

Not a chance. Miami has a 12 game schedule with 8 ACC conference games not including a potential ACC Championship game. So, any game with Penn State would be in September……Unless, Miami gets a post season ban from the NCAA over the Nevin Shapirro scandal.