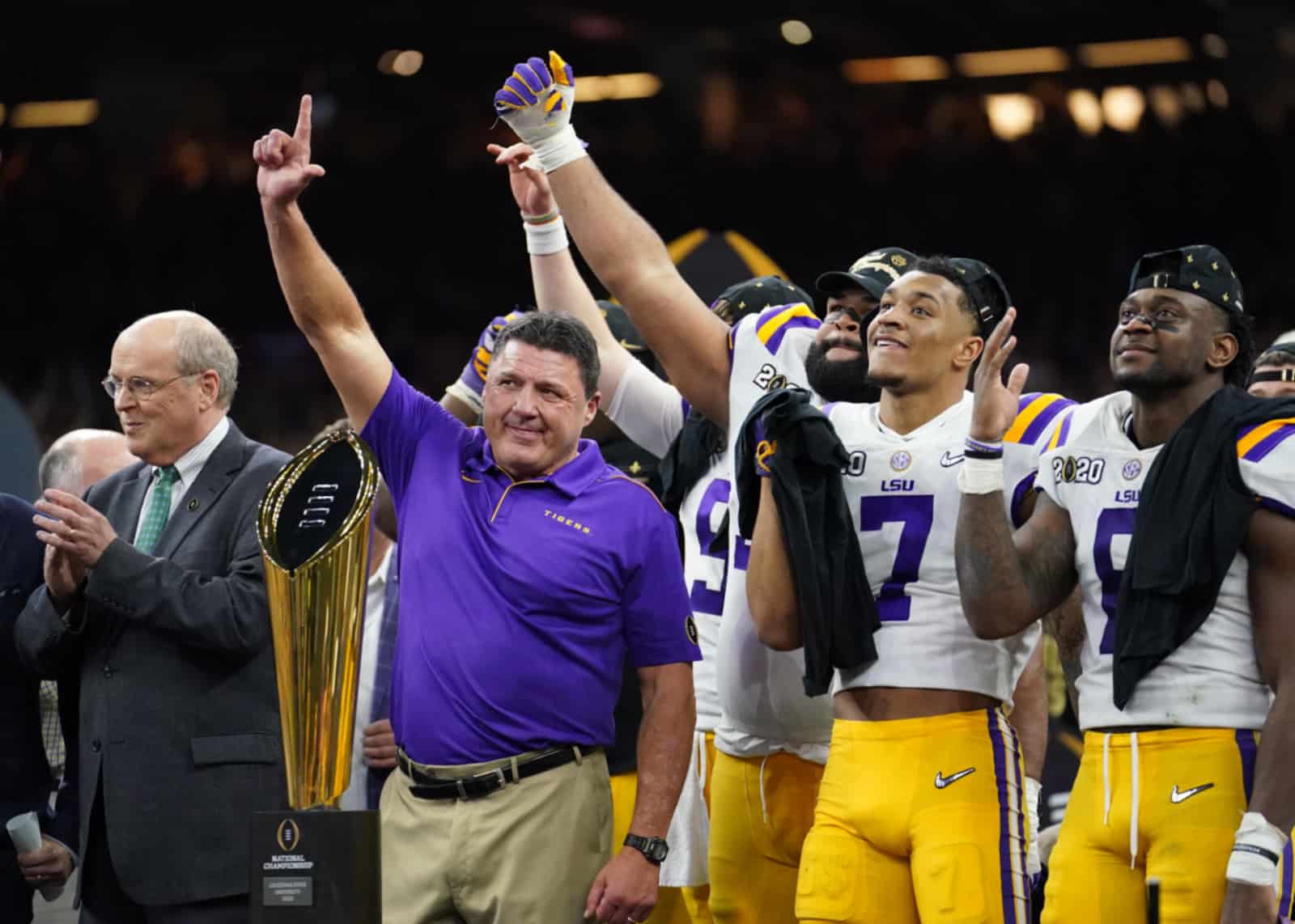 LSU won its fourth national championship early Tuesday morning, bouncing back from a 10-point deficit and scoring 35 of the game’s final 43 points to put away Clemson, 42-25. The win ended the Tigers’ 29-game win streak.

Clemson (14-1) jumped out to a 17-7 lead just into the second quarter, buoyed by a 36-yard Tee Huggins touchdown sprint. LSU (15-0) quickly bounced back on its next three possessions, with Joe Burrow bringing the margin to three with a three-yard touchdown run. Burrow then connected with Ja’Marr Chase and Thaddeus Moss for short touchdown tosses, providing the homestanding Tigers a 28-17 advantage at the interval.

Clemson marched its first second-half possession down the field in relatively short order, with a three-yard Travis Etienne carry and two-point conversion throw from Trevor Lawrence to Amari Rodgers knifing the lead to just three points. The suffocating LSU defense took over from there, however, keeping Clemson off the board for the remainder of the contest.

“We had an opportunity there in the third quarter,” Clemson coach Dabo Swinney said. “I loved how we responded and got the ball back with a three-point lead, (but) we just couldn’t quite put enough plays together.”

“Yeah, I think the one thing is we stopped Etienne. I thought our guys did a tremendous job of not letting him run the football on us,” said Orgeron. “We knew Trevor was going to make some plays. They made some plays downfield, but I talked to (defensive coordinator Dave) Aranda, had a tremendous plan to give pressure, but we never panicked, and those three-and-outs and those punts were critical to the ballgame.”

LSU provided the game’s final margin with two more Burrow touchdown tosses. The Heisman winner again connected with Moss for a short score, then hit Terrace Marshall Jr. early in the fourth quarter for a 24-yard score that sealed the deal.

“Terrace, it took him a while to get going, but he made the championship play,” Burrow said. “I couldn’t be happier for that guy. He’s worked harder than anybody on this team, and he’s worked on his craft for a long time. (He was a) five-star coming in, had some bumps in the road, and for him to make that play, I’m so happy for him and his family.”

Burrow connected on 31-of-49 throws for 463 yards and five touchdowns, adding 58 rushing yards and another score. Chase snared nine throws for 221 yards and two touchdowns, with Justin Jefferson hauling in another nine for 106. The victory marked LSU’s seventh win over a team ranked in the top ten at the time the game was contested.

The Tigers have now won three national championships since 2003, with each being won in New Orleans.

Joe Burrow should be prominent in the picture and I don’t see him at all.

USC had a damn good coach and they chose someone else. LSU gave him a shot and it paid off.

Can you imagine this year if we had the BCS? LSU, Clemson, and Ohio State all undefeated conference champions and only two spots to put them.