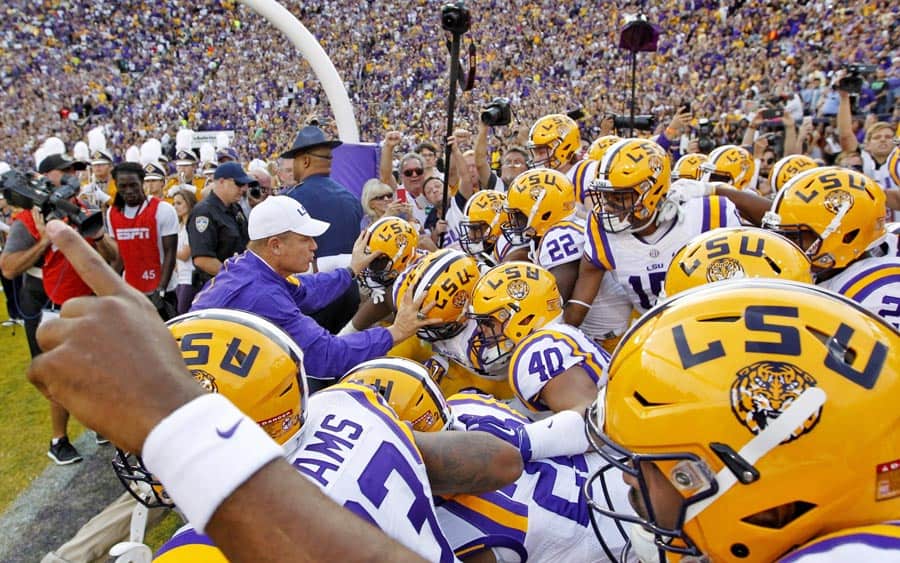 The LSU Tigers have added the Idaho Vandals to their 2020 football schedule, FBSchedules.com has learned.

LSU will host Idaho at Tiger Stadium in Baton Rouge on Nov. 21, 2020. The Vandals will receive a $1.4 million guarantee for the game, according to a copy of the contract obtained via an open records request.

Idaho is the second scheduled non-conference opponent for LSU for the 2020 season. The Tigers are also scheduled to host the Texas Longhorns on Sept. 12.

The Vandals, currently a member of the Sun Belt Conference, now have three non-conference games set for 2020. Idaho is also slated to host San Jose State and travel to Temple, both on dates to be announced.

LSU would have been better off hosting a Sam Houston St. or a Jacksonville St….more competitive game, guarantee would have needed to be only $500K.

If LSU added Sam Houston St (which they beat 56-0 two years), at least one person would come on here & complain about them playing an FCS school, at least Idaho is a FBS but of course the hate will still hit.

Idaho may be in the Big Sky by then and the contract fee reduced.

Actually it looks like Rob Spear is setting up flexibility in his scheduling, so that Idaho can play Indy for a a few years after 2017, given the SBC is very likely to not extend them past that when they vote in march

Contract states that both teams have to be D-1A (FBS) at the time of the game and at least 24 months prior or they cancel without penalty.

Kevin, thanks for that info. That is an interesting caveat, and I would expect the Florida, Indiana and Penn State contracts contain similar language. All those TBA dates likely means those are contracts that can be cancelled without penalty as well. This tells me there is almost no risk exposure for Idaho should they drop down to FCS. And that tells me it will happen once the Sun Belt does not extend their associate membership in football. Maybe 2018 is transition, but they’ll drop down by 2019 IMO.

LSU should have scheduled Tulane.

why does anyone schedule Idaho anymore?

The Sun Belt will keep Idaho along until there arises an alternative to stay at 12 teams. Even then, Idaho isn’t going anywhere, because EKU still has some work to do to, James Madison needs to percolate longer, and holding noses to take Liberty is at least ten years away. There’s also the “insurance” Idaho provides now for the Sun Belt in the event another conference raid happens. C-USA will certainly hold now at 14, and if they lose two would be fine at 12 and not dip into SBC. But, if C-USA gets raided again, they’ll raid the SBC again. Frankly, Idaho wasn’t gawd-awful this year, and the Other Petrino has them on a positive track. If they can finish between 4-8 and 6-6, they’re better than Troy.

David, I don’t think so. Only 3 schools need to object to Idaho, and those credible are saying the opposition is much greater than that.

The big picture is the SBC is looking at Idaho long term. And the consensus is Idaho is definitely not in the long term picture. It’s hard to see a “come on guys let me hang around you for another couple years … think of us as insurance” pitch winning over anyone. Its a business, you cut loose the appendages and build on your core. How Idaho does on the field in any given year s trivial, and barely impacts the decision process.

A big fallacy Idaho fans are making is the assumption the SBC will have CCG anytime soon. There simply is no money to cover the expense of such a game. It’s not the Big 12 with Jerry Jones offering his stadium and networks throwing out $20-25m figures for a game. This is the SBC, a conference with barely $100K in media revenue per school. You are looking at a top seed home game on short notice with only a minimal TV deal; its a recipe for losing money. And even if the SBC were to hold such a game they would not want a short timer school in the mix for that game.

Good financial points, Stuart. I think it still comes back to planning ahead for 2019 or whichever year it is that the XII can get broken apart again… another cascade effect where C-USA comes and takes the Sun Belt’s best teams would be catastrophic. Under a worst-case scenario, they’d be in danger of falling below 8 teams.
.
A Sun Belt championship game isn’t such a terrible idea though. If played as C-USA does, at the higher team’s home (or at least with them having first option, with the option to let it go to the other team), isn’t implausible. Alternatively, having the game in Mobile is another option.