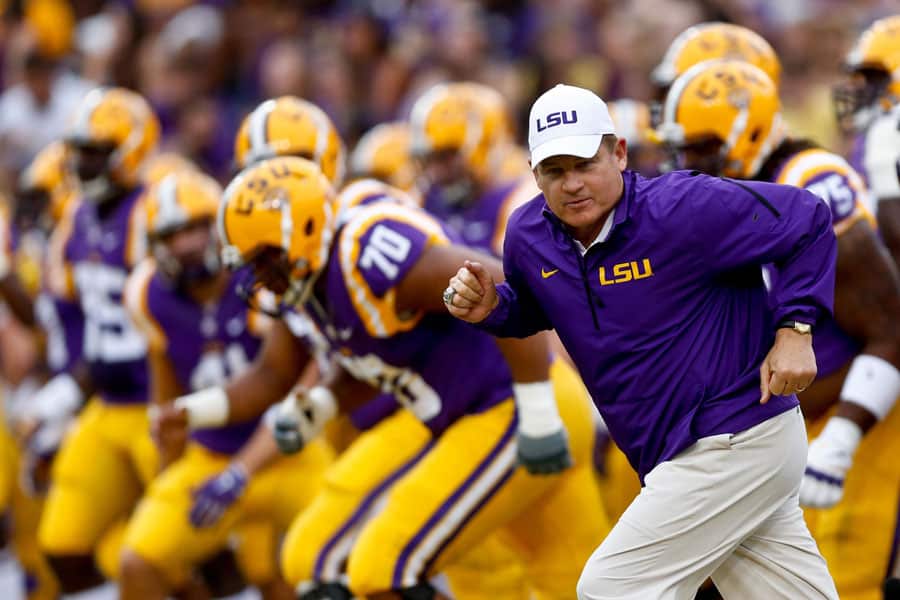 The LSU Tigers have added the Chattanooga Mocs to their 2017 football schedule, FBSchedules.com has learned.

LSU will host Chattanooga at Tiger Stadium in Baton Rouge on Sept. 9, 2017. The Tigers will pay the Mocs a $500,000 guarantee for the game, according to a copy of the contract obtained from LSU.

The two schools have met once on the gridiron. LSU came away with a close 26-19 victory in that game, which was played in Baton Rouge in 1954.

Chattanooga is a member of the Southern Conference in the FCS. The Mocs play at Florida State this season and, per a report, will visit Alabama in 2016 and Kentucky in 2018.

LSU was previously scheduled to host Syracuse on Sept. 9, 2017 in the second game of a home-and-home series that kicks off this season in New York. A new date for the 2017 game is now to be determined.

The Tigers are set to open the 2017 season against the BYU Cougars at NRG Stadium in Houston on Sept. 2. LSU also hosts Troy on Sept. 30.

The 2017 Syracuse at LSU game has been pushed back two weeks to Sept. 23, per Ross Dellenger of The Advocate.

LOL.. B10 is stopping playing FCS and the SEC who plays the most FCS schools..every member every year keeps stocking up on them.

They took off a Sun Belt team and replaced with a FCS school. More joke scheduling by the SEC, Btwm the cowards should play 9 game conf schedule it’s stupid to play 6 teams in your conf twice in 12 years with a 6-1-1 format

Georgia Southern was moved to 2019.

Okay, so pretend BYU were the 15th school in the SEC. There’s your 9th game. And Syracuse is the OOC P5 game. Troy’s no different than a MAC school on a B1G schedule, and last I checked this year and next the majority of B1G schools still have FCS schools on the schedule, Delany ‘decree’ notwithstanding. Move along. At least Chattanooga was a deep FCS playoff school.

‘Cuse, BYU…OK those are good. Troy….I am OK with a Sun Belt team. UTC….NO! No more games against IAA teams.

Hear LSU is scheduling two games at Folsum Prison and one return game at Baton Rouge.

The worst part about this type of scheduling is hearing fans of their team (or conference) defend them when, I, as a football fan, would be annoyed… especially if I actually attend games. I want to see (and pay for tickets to) GOOD games. This is basically paying for a bye week. A lot of teams have their spring scrimmage open to crowds for free…

Syracuse may be a weaker P5 team but at least LSU is playing 10 P5 teams in 2017 (BYU included) and only 2 cupcakes. 2 cupcakes isn’t a problem. Most schools do this already. I believe there shouldn’t be more than 2 though, that’s plenty of free wins. 10 P5 schools scheduled in the regular season (before CCGs/Bowls/Playoffs) is what teams should be striving for.

BYU is not a P5. The nonsense with that needs to stop by all conferences. BYU would be the bottom of every P conferences. They are not a P5 equal b/c they play a some P5’s close and win 50% of the 3 or 4 games a year. PLaying 3 or so P5’s a year is not the same as playing a 8 or 9 game conf and 1 OOC. The wear iand tear of a full P5 schedule.

BYU is a P5 in my book and I have no problem calling them one either. ACC/B10/SEC all consider them one so I don’t think my line of thinking is too far off. I agree they wouldn’t be at the top in P5 conferences but I don’t think they would be at the bottom either. Somewhere in the middle if I had to guess… But to each his own

Frankly, it wouldn’t be crazy for BYU to develop a scheduling agreement with the SEC, similar to what Notre Dame does with the ACC. BYU has a lot of reach into LDS communities from Texas to Missouri to Carolina to Florida. Playing 5 SEC schools a year would solidify their scheduling, and give SEC teams a bit better matchup than Eastern Western Central Michituckisota.

True & keep in mind that BYU has had better records in the past then ND, beating teams from PAC-12, BIG, SEC, ACC & BIG-12. BYU is no easy team to beat & they try to play every team out there.

The SEC should just stop the charade and admit Chattanooga & Western Carolina to the conference. Alabama already plays them three times a year (it seems). Or is W. Carolina or LA-Lafayette the other cupcakes. It’s beautiful that Ohio State, Ga Tech, TCU, etc.. (I could go on and list the 0-4 week vs. the ACC) exposed the overrated SEC. Welcome to the playoff era! Soon their fans will reminisce of the BCS days!

(it seems) is very different then actually happening. The SEC was not the only conference in the playoffs that lost.