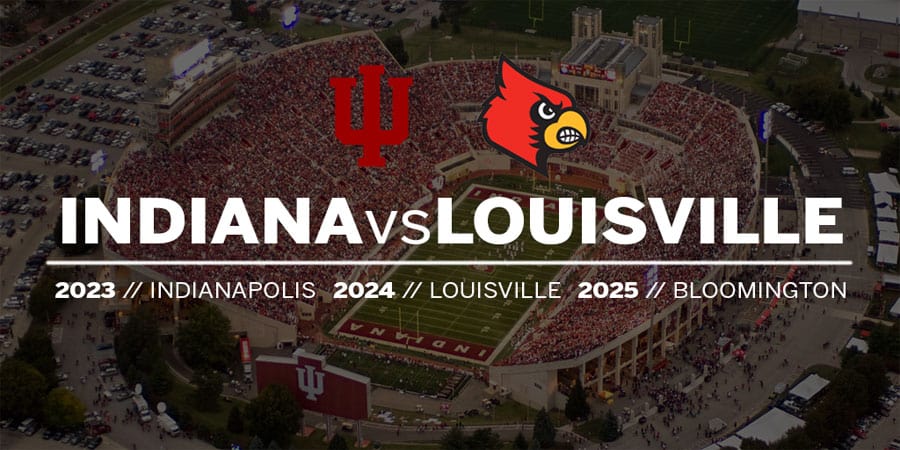 The Indiana Hoosiers and the Louisville Cardinals have scheduled a three-game football series for 2023, 2024, and 2025, the two schools announced today.

The first game of the series will be played on Sept. 16, 2023 at Lucas Oil Stadium in Indianapolis, which is the home of the NFL’s Indianapolis Colts. Seating will be split evenly between the two schools, according to today’s announcement.

The series will then move to campus sites for the second and third games of the series. Indiana will travel to take on Louisville at Papa John’s Cardinal Stadium on Sept. 7, 2024. The Hoosiers will then host the Cardinals at Memorial Stadium in Bloomington on Sept. 6, 2025.

Indiana and Louisville have met twice on the gridiron with both games being played in Bloomington. The Hoosiers won both games, 41-28 in 1985 and 21-0 in 1986.

As part of the agreement, Indiana and Louisville also agreed to a three-game series in basketball – 2016 in Indianapolis, 2017 in Louisville, and 2018 in Bloomington.

“I’ve felt for a long time that these series were a natural for fans from both universities and I’m thrilled to see it come to fruition,” said Tom Jurich, UofL Vice President and Director of Athletics. “We appreciate the efforts of Fred Glass and his staff in helping to pull this together. We have played each other in most sports and it has been a very friendly rivalry. There are a lot of fans in Southern Indiana that support both schools who I know will particularly enjoy the competition.”

“These series are tremendous for the football and basketball programs at both schools,” said Fred Glass, IU Vice President and Director of Athletics. “Our alumni, fans, and students will be thrilled to compete against such strong programs. I really want to thank Tom Jurich and the head coaches from both schools for working with us to make these great series a reality.”

This is actually not a bad idea, play a neutral site game then off to both home stadiums. That way there is a unbiased game in a large city stadium then home n home series.

Neutral site games are bad for fans in general. it’s just a money scheme. Even worse idea b/c Indiana biggest home croud last year was 44K with a capacity of 53K. People don’t really come to campus games and now your going to make them travel an hr and pay also pay for a single game ticket. UL fans aren’t going to be that excited to play Indiana…Mich St, Michigan, Pen State, Ohio st who yes..not Indiana a doormat of the b10

It’s not a money scheme, its good for business, if it was so bad for fans then why do they show up to the games? You also don’t know how these two teams will look in 8, 9 or 10 years. You complain about teams need more home n home series & these two teams made that happen & you’re are still complaining.

Indiana has sucked for decades, they will continue to be bottom dweller in the B10. Btw, it is stupid tp schedule a neutral game when you can’t even get your fans to fill a tiny 53K stadium.

Well the city of Indianapolis didn’t think it was stupid & is welcoming both teams with open arms.

I wonder why Purdue and Louisville didn’t strike the same deal.

Should make for a more interesting basketball matchup, but a pretty cool idea. I’d like to see more schools do multiple sports deals.

Indiana should be working on meeting the b10 requirements for OOC, They have to change games in 2019 and 2020 as their back to nack years of Western KY, Ball State and UConn does not meet the P5 requirement. Get on the ball Indiana AD and stop scheduling nonsense neutral games for a cellar team in the B10. You need to drop 1 of those series and schedule a P5.