Illinois-Missouri Football Rivalry May Be Rekindled 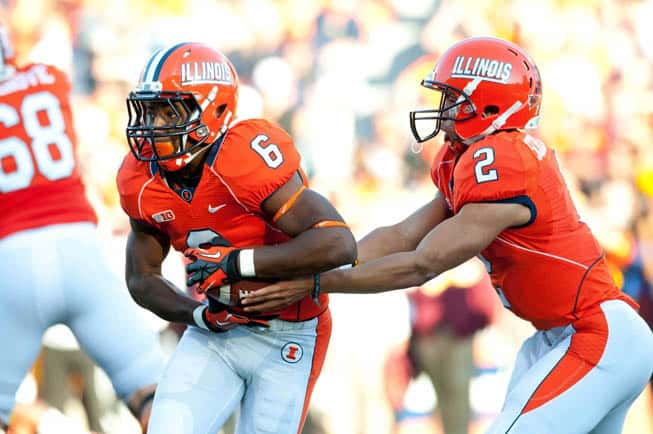 The Illinois-Missouri football rivalry may be rekindled in the near future, the St. Louis Post-Dispatch has reported.

The driving force behind the move is the St. Louis Sports Commission, which is headed by president Frank Viverito.

“I still think it would be the most successful college football endeavor that we can undertake,” Viverito said. “Yes, we’re in discussions. It would be whatever the schools want it to be: two years or four years, alternate between St. Louis and Chicago or alternate between Champaign, Columbia and St. Louis. We just feel we bring something to the table to produce that game here relative to atmosphere, revenue and tradition. Both athletic directors have indicated a willingness to look at the game.”

The first match-up in 1896 and a later contest in 1969 were also played in St. Louis. The remaining 16 games of the series were either played at Illinois’ Memorial Stadium in Champaign or Missouri’s Faurot Field in Columbia.

Missouri leads the overall series 17-7, which has recently been referred to as the State Farm Arch Rivalry.

With new emphasis on strength of schedule with the upcoming College Football Playoff, a renewal of this series would benefit both teams.

But fans of both schools would most likely prefer to see this game played on campus from time to time, so a rotation that includes home sites plus a neutral site would be ideal.

Both schools have openings on their future football schedules from 2015 onward. But Missouri and other SEC schools have been requested by the conference to not schedule non-conference games after 2014 until a decision is reached on a possible nine-game schedule.

The Big Ten is already scheduled to begin a nine-game conference schedule in 2016. That will reduce the number of non-conference games each season to three.

They always say this to appease fans. Likely it won’t happen.

Well the best way to continue the rivalry unplanned is to make them meet up in the TaxSlayer.com Gator Bowl to give them enough time to make a decision.