Idaho Vandals to drop from FBS to FCS in 2018 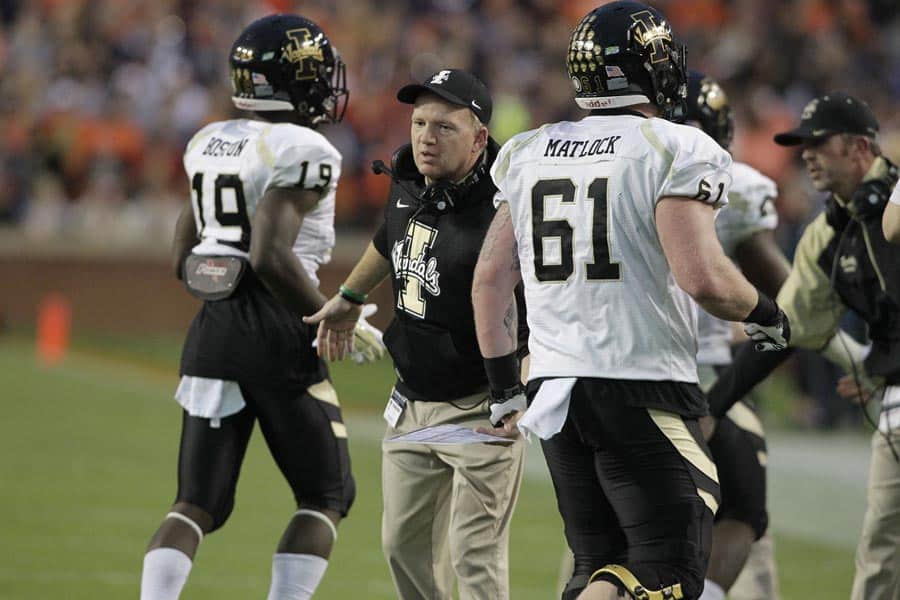 Pending approval by the State Board of Education, the Idaho Vandals will join the Big Sky Conference in the fall of 2018. Idaho is the first FBS school to ever move down to the FCS (formerly known as Division I-AA).

“I understand the magnitude of this decision and the strong opinions that surround it, both for and against, but joining the Big Sky Conference is the best possible course for our athletics program and for our university,” said Chuck Staben, UI president. “We have carefully weighed our options and concluded that competing as an independent with an extremely uncertain future conference affiliation would be irresponsible when we have the alternative of joining one of the most stable FCS conferences. The Big Sky allows us to renew traditional rivalries and offers our athletes the opportunity to excel, just as they do in our other Big Sky sports programs.”

Back on March 1, the Sun Belt Conference announced that the football membership of Idaho and New Mexico State would not be renewed and that they league would move forward with ten football playing members after the 2017 season.

Idaho, like new Mexico State, was a member of the WAC from 2005 until it disbanded after the 2012 season. Both played as FBS Independents in 2013 before joining the Sun Belt in 2014.

For 31 seasons between 1965 and 1995, Idaho was a member of the Big Sky Conference in Division I-AA. The Vandals then left the Big Sky for the Big West in 1996 before joining the WAC.

With the Vandals moving down to the FCS, they will likely have several future non-conference football contracts altered or possible canceled altogether. If the schools still decide to play, the financial guarantees to Idaho will likely be lowered.

Below is a list of each game announced and the contract stipulations, if known, per copies obtained from the University of Idaho.

at Fresno State (2018)
Second game of a home-and-home series. No stipulation regarding a drop to FCS. $750,000 cancellation fee.

at Northern Illinois (2018)
Copy of contract not obtained.

at Florida (2018)
No stipulation regarding a drop to FCS. Damages of $1.2 million for breach of contract.

at Penn State (2019)
No stipulation regarding a drop to FCS. Damages of $1.45 million for breach of contract. Contract states that either school may cancel due to a change in scheduling requirements that includes “without limitation, changes in the number of conference games to be played, or changes resulting from the addition or subtraction of conference members.”

at San Jose State (2019-23)
First game of a four-game series (2019-23). $1 million cancellation fee per game. Upon Idaho signing the contract, an amendment was added to include the following:

In the event any game to be played hereunder is canceled or rescheduled as a result of a change in the scheduling requirements of either party’s member conference, neither party shall be responsible to the other for any loss or damage resulting from such change. For purposes of this paragraph, a change in scheduling requirements shall include, without limitation, changes in the number of conference games to be played, or changes resulting from the addition or subtraction of conference members.

at Temple (2020)
Second game of a home-and-home series that started in 2013 in Moscow. $500,000 cancellation fee or $1 million if less than 365 days before the date of the game. Contract does have this stipulation:

In the event the Game is canceled or rescheduled as a result of a change in the scheduling requirements of either Party’s member conference, neither party shall be responsible to the other for any loss or damages resulting from such change. For purposes of this paragraph, a change in scheduling requirements shall include, without limitation, changes in the number of conference games to be played, changes from the addition or subtraction of conference members, or any other changes in conference schedules. If either Party moves from its current conference to another conference within two years following the execution of this Agreement, the Parties will in good faith attempt to reconcile any required scheduling changes that may occur as a result of such a move.

This Agreement may be terminated under the following conditions:
A. By mutual consent of both Parties, in writing.
B. By either party if that party has formally dropped NCAA participation in the sport identified in this Agreement.

at Old Dominion (2022)
Copy of contract not obtained.

If either party fails to comply with the terms and conditions of this contract by unilaterally canceling the agreement to play the game, that party shall pay to the other the sum of Five Hundred Thousand Dollars ($500,000.00) as liquidated damages and not a penalty. If cancellation is by mutual consent, this contract shall be null and void.

Many people were waiting for this to happen.

It’s the only way they could survive. NMSU needs to drop into the Southland, EMU football needs to join the MVFC, and UMass back into the CAA (their faculty senate is actually calling for a drop or removal of the program at the next hearing).

UMass isn’t going to go down to FCS. This was the 3rd time the faculty senate brought up this nonsense and the 3rd time that is was voted down. They are also a powerless body, all they can do is make recommendations to the Chancellor, and the Chancellor is probably the most ardent supporter of FBS football in the administration.

UMass is going to be fine in FBS, even with independence on the horizon. Already have three seasons scheduled as an indy with a 4th about halfway done at this stage which they can start adding to if necessary.

NBCSN wants more FBS football beyond the lone Notre Dame game they air each year. Perhaps NBC Sports can snag rights to UMass and NMSU’s home games (some on NBCSN, others on NBC Sports Live Extra) along with a package of Sun Belt games on NBCSN sub-licensed from ESPN (the Sun Belt is the only G5 conference at present with only one major national television partner; three others have ESPN and CBSSN, C-USA has CBSSN and Fox Sports).

The FBS conferences’ (and independents’) TV contracts could become more valuable in coming years, with the amount of changes I’m projecting in the college sports landscape, as far as realignment goes.

Air Force moves to football independence with a TV contact with CBS Sports Network, and moves most of its other sports to the Patriot League to be with the other service acadamies

The MWC replaces their departing schools with Montana and Montana State (being the first schools to join the MWC without ever being in the WAC), and adds Seattle as a non-football member to offset Hawaii’s football-only membership

The MAC adds Southern Illinois and Youngstown State as full members with football included, Cleveland State and Robert Morris as non-football members, and Fordham and Richmond in football only.

ZMan: Put down the bong gas mask, bro. Nobody wants Cincinnati to join their league. They have been begging to join 5 or 6 conferences and nobody has given them a sniff. Their programs are rotten to the core.

Scheduling requirements would include limit of 1 FCS school per year for FBS and only as home game. Also FCS limit on number of FBS opponents, and 1 fewer game. Hence it seems to me that the Penn State, San Jose State, Temple and LSU contracts are effectively easy to walk away from. The mutual agreement clause is likely to be invoked by both Nevada and Indiana as well.

Something is going to have to give in 2018. But Idaho is in the drivers seat. Wyoming has to cancel, they already have FCS Wofford on the schedule. Fresno State could keep them without penalty, they have no other FCS opponent. Same for Florida State (bad contract, Idaho can still collect a huge paycheck), but I expect them to try and renegotiate. For NIU it works like Fresno.

So everything after 2018 will go away painlessly. And for 2018, at least Wyoming, and maybe another school will buy out, actually giving Idaho some cash for not playing. Well done Mr. Spears

Interesting to see if Penn St & Indiana stay on the schedule considering the BIG no longer wants to play FCS.

Looks like the damages can be upwards to $15 million overall for UoI if all the schools demand payment. This is not looking good for UoI, I wouldnt be worried going to FCS as much as possibly needing to go down to Division 2 or worse pull the program. Hopefully they don’t turn into a Savannah State of a few years ago where only God stopped what could have been the biggest blowout in a game since November 9, 1980 when Portland State humiliated Delaware State by 105 points.

No good can come from this. It had not been since 1982 that FBS programs dropped to FCS, and with good reason – $$$ and TV.

NBCSN could have inked a deal with Idaho football to air their games, since the network is hungry for FBS football.

What exactly do you think the ROI would be with Idaho football airing nationally?

They were hungry for FBS football … but never hungry enough for Idaho football…. That was never going to happen

No one outside of Idaho is interested in Idaho football!

I heard that UMass is looking to do the same thing.

UMass faculty is pushing for that, but no one else is.

I’m sad to see Idaho drop to FCS. I think they should stay in FBS, and join together with UMASS, New Mexico State, Army, and then create their own East-West Football Conference by adding other FCS schools that want to move up to FBS like Liberty, Northern Iowa, SE Missouri State, Indiana State, Illinois State, Sacramento State, Eastern Washington, UC Davis, Portland State, Delaware State, Villanova, Sam Houston State, Stephen F. Austin, Chattanooga, Youngstown State, Montana and Montana State, and the list just goes on. The Power 5, and the rest of the FBS Conferences have created a stranglehold on FCS schools preventing them from moving up to better their football programs, bring in more revenue by blocking any move up to FBS unless invited by one of the other FBS Conferences! I think this “Collusion of Conspiracy” is in violation of the US “Anti-Trus Lawst” of or relating to legislation preventing or controlling trusts or other monopolies, with the intention of promoting competition in business. Time for a Major Lawsuit against every FBS School and the NCAA over this?

Lol! Its not that serious! Its college football!!

Are you one of those kookier CSNBBS posters?

I actually agree and think you have a point.

Perhaps some of those future Idaho opponents… can schedule each other? It would be a reasonable place to start.

Should have never happened in the first place, it was Elisabeth Zinser and Pete Liske pushing for this just so they could keep up with Butt State (who didn’t really care about them anyway). Hell they had to play home games in Pullman for a couple years. Not only that, they actually played AT Texas State (then SW Texas State) in 1997 after the move to the Big West/FBS.

The benefits of playing money games surely can’t justify playing half your conference games in SEC-land. Besides, unless they outlaw FCS/FBS games in the future (a moronic idea for a variety of reasons) they can still keep some of them. Even if most of the Sun Belt is former FCS anyway.