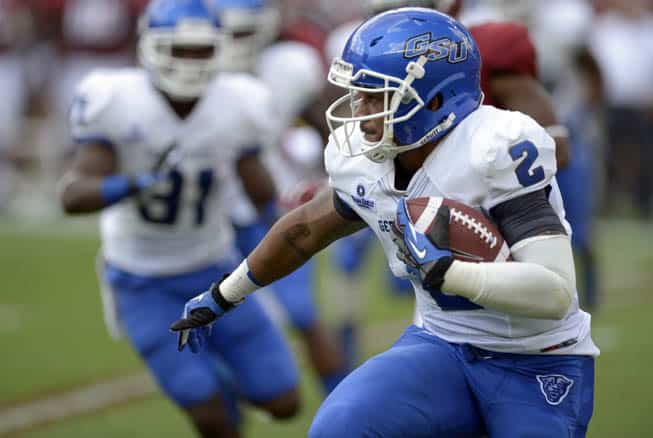 The Georgia State Panthers have received a one-time waiver to open the 2014 season on Wednesday, Aug. 27 at home vs. Abilene Christian, the school announced this morning.

GSU received the waiver to play one day earlier than the NCAA typically allows due to the Chick-fil-A Kickoff having two games next season at the Georgia Dome. Boise State takes on Ole Miss on Thursday, Aug. 28 and then Alabama faces West Virginia on Saturday, Aug. 30.

There is also the possibility that the Atlanta Falcons could play a preseason game at the Georgia Dome on Friday, Aug. 29. The 2014 preseason schedule won’t be announced until around April 1.

“We thank the NCAA for granting this waiver and we cannot wait to kick off the 2014 FBS college football season in Atlanta at the Georgia Dome,” Georgia State Director of Athletics Cheryl L. Levick said. “This will be a great opportunity for our team and we are excited to give our fans a midweek home game. We would especially like to thank the NCAA, the Georgia Dome, the College Football Hall of Fame and the Abilene Christian athletic department for supporting the application for this waiver. It was a team effort and we look forward to the 2014 season.”

Any word on TV coverage? it may not be much of a game but after seven and a half months without college football; any game will be welcome.

Way too early for TV coverage announcements. This one may get ESPNU or something since it’s the only game.

I agree with Bill. We can’t wait for the 2014 season to begin. Get it televised if possible.

Will be aired on ESPNU