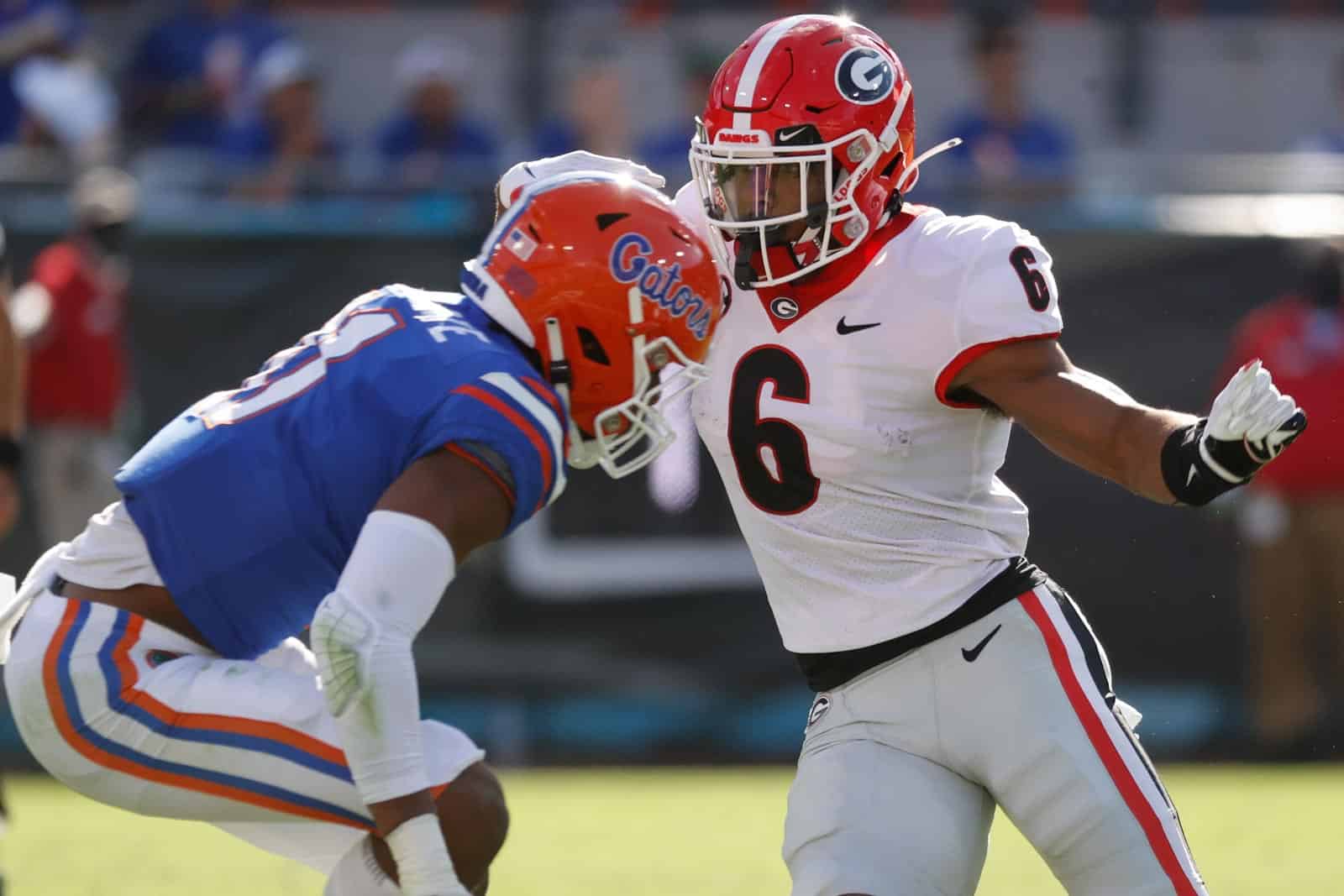 The top-ranked Georgia Bulldogs and the Florida Gators are set to square off in their annual matchup at TIAA Bank Field in Jacksonville, Fla., on Saturday.

The contract for the annual Georgia-Florida game extends through the 2023 season and includes an option to play the game in Jacksonville an additional two years through 2025.

With the SEC set to expand in 2025 with the addition of Oklahoma and Texas, the league will move to a new scheduling format. That format has not yet been cemented, but it has brought about speculation that the Georgia-Florida game might move back to a home-and-home.

Ahead of this years matchup, the two schools released a joint statement about the game on Monday, although it didn’t reveal much.

“The annual game between our two universities is an important tradition. At this time, both programs are focused on our current seasons. Typically, both schools begin conversations regarding future games in the series as the last contracted game nears. We anticipate following that timeline. When those discussions take place, we will consider a multitude of factors including tradition, finances, future SEC scheduling models with the addition of Texas and Oklahoma, and what is best for both schools’ football programs overall.”

Based on the statement, the schools will begin conversations next year as that is when the contract is set to expire. Or they could opt to extend the game one or two more seasons.

Last week, Georgia head coach Kirby Smart was asked his opinion on where the game should be played.

“There’s really quality benefits to both. I get it, you want to make a story, you need a story, everyone wants to talk about it,” Smart said. “It’s really not a big debate for me. It’s been made really big by the media, because they’ve made it out to be a really big deal. I enjoy the pageantry of going down there and playing. I enjoyed playing there as a player, I enjoy tradition. I enjoy all those things.”

Smart played defensive back at Georgia from 1995 through 1998. The Bulldogs went 1-3 against the Gators during his playing career, with the lone victory coming in 1997, 37-17.

“When it comes down to it, there’s a very, very basic element of everything that comes back to, number one money and number two, recruiting and getting good players,” Smart continued. “I firmly believe that we’ll be able to sign better players by having it as a home-and-home because we’ll have more opportunities to get them to campus. But I also think there’s a financial factor that factors into that, with having the game there, and being able to make more money for the university, possibly, there. You have to weigh both those and make really good decisions.”

Florida head coach Billy Napier also commented on the future of the game with the Bulldogs.

“When those discussions take place, we will consider a multitude of factors, including tradition, finances, future SEC scheduling models with the addition of Texas and Oklahoma, and what is best for both schools’ football programs overall,” Napier said.

Another option that has been discussed among pundits and fans is playing the game home-and-home and then playing in Jacksonville before moving back to campus. Going even further, the two schools could play home-and-home, Jacksonville, and then Atlanta.

Whatever the two schools, and the SEC, decide on will likely be revealed by next season.

The Georgia-Florida game on Saturday, Oct. 29 will kickoff at 3:30pm ET and the contest will be nationally televised by CBS.

Home and home is better.
…
Ever since the Iron Bowl went to home and home, Alabama and Auburn both were in a better place. UA more than AU, but birth get that huge extra on-campus game. I would disagree with the statistics provided on the basis that an average home benefit is the wrong comparison to make. Both the cities of Tuscaloosa and Auburn get a tremendous benefit of the game not being in Birmingham. Auburn has grown to a city of almost 100,000. Tuscaloosa is no slouch either. On game day of that game, even with both stadiums packed there is probably another quarter million people in and around those campuses for the game.
.
If I’m the Chambers of Commerce of Athens and of Gainesville, I’m making a joint pitch to The universities to guarantee them a little bit more income somehow by playing home and homes.

I have no affiliation with either university or fanbase, so I can’t speak for them.
I will say though that since the Gator Bowl Stadium no longer exists, that takes away some of the flavor of the neutral site rivalry.
I will say the same thing about A&M/Arkansas, which should either be a home-and-home, or at the Cotton Bowl.

How bout a 1-1-1 model. One game in Athens, the next, Gainesville and then Jacksonville. Just repeat that–something for everybody.

Not possible. The current model, although at a neutral site, has the teams alternating every year who is the home team. That would not work with a 1-1-1 model.

That’s why I mentioned the home-home-Jacksonville-Atlanta model. It has to be an even rotation in a nine-game conference schedule so it won’t throw off the number of home and away games.