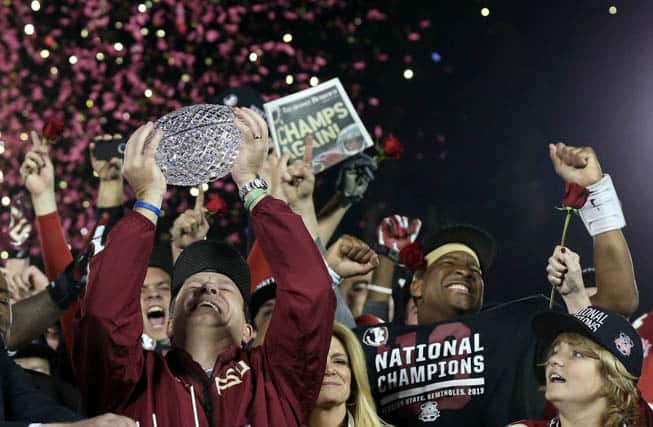 Florida State (14-0, 8-0 ACC) is the first ACC team to win a BCS championship since 1999 and breaks the SEC’s streak of title game wins at seven.

Jameis Winston, the Heisman Trophy winner, struggled most of the night against the pressure of Auburn’s defense, but he stepped up his game in the fourth quarter.

On the game-winning drive, Winston went 6-for-7 for 77 yards and he hit Kelvin Benjamin for a 2-yard touchdown pass with 13 seconds left to give the Seminoles the victory.

“There’s a lot of heart and guts down in Tallahassee, too,” coach Jimbo Fisher said.

Winston finished the game 20-of-35 for 237 yards and two touchdowns, both of which came in the fourth quarter.

The result means that Florida State is the national champion for the first time since 1999, the first team to win after trailing at halftime, and, as previously mentioned, the first team from a conference other than the ACC to win since 1999.