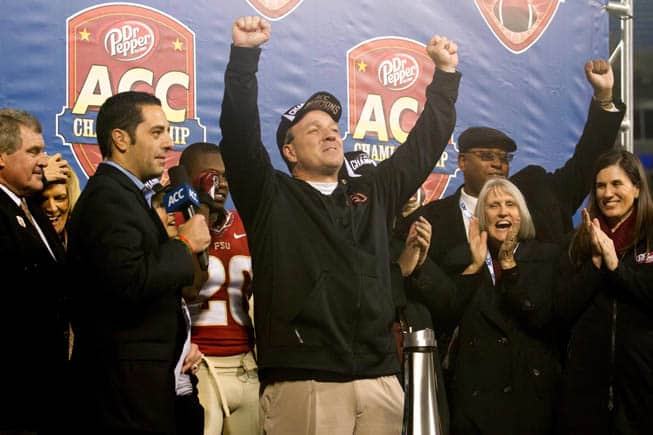 FSU won the ACC and will play for the national championship. (Jeremy Brevard-USA TODAY Sports)

The Florida State Seminoles and the Auburn Tigers will likely be paired to meet in the 2014 Vizio BCS National Championship Game when the final BCS Standings are released Sunday night.

Current No. 1 Florida State thrashed the Duke Blue Devils 45-7 in the ACC Championship Game on Saturday. FSU finished the 2013 regular-season 13-0 and 8-0 in the ACC.

In the SEC Championship game against No. 5 Missouri, the No. 3 Auburn Tigers rolled up 677 yards of total offense, 545 on the ground, en route to a 59-42 win. Auburn’s Tre Mason amassed 304 yards rushing on 46 carries and four touchdowns to set a new SEC Championship Game record.

Auburn closes the regular-season with a 12-1 overall record and 7-1 in the SEC. It was a remarkable turnaround for the Tigers, who finished 3-9 in 2012 and didn’t even win a conference game (0-8).

No. 10 Michigan State upset no. 2 Ohio State 34-24 in the Big Ten Championship Game and knocked the Buckeyes out of the national championship picture. Ohio State hadn’t lost in 24 consecutive games until Saturday night.

Michigan State will head to the Rose Bowl where they will face the Stanford Cardinal. Stanford traveled to Tempe and trounced Arizona State 38-14 in the Pac-12 Championship Game.

In the Big 12, No. 17 Oklahoma upset No. 6 Oklahoma State 33-24. The Sooners could possibly land an at-large BCS bid, likely in the Sugar Bowl to face Alabama. Oregon is Oklahoma’s competition for the coveted at-large BCS bid.

Baylor won the Big 12 championship with OSU’s loss and their 30-10 victory over the Texas Longhorns. The Bears will head to the Tostitos Fiesta Bowl where they will most likely take on the UCF Knights. UCF claimed the American Athletic Conference title after they defeated SMU 17-13.

Below is a look at the latest BCS projections. The official pairings will be announced on the BCS Selection Show at 9pm ET Sunday night on ESPN.

As a life-long resident of Columbus, OH I could NOT be more DELIGHTED the BS buckeyes are finally beat by someone their equal. I can only hope all the nonsense surrounding the non-stop yammering about “the team” and “the game” is over.

Such a “mean spirited” person you must be!

Ohio State would have been defeated by anyone of the top ranked teams in the BCS. Until the last game they had not played anyone that offered competition.

it would have been funny fir RoseBowl if USC had played Michigan State and beaten them, but have to look from outside as teams they beat duke it out.

we all know USC is in for some pain with Sarkisian as coach, while players and Fans had Orgeron at heart. You though Mike Garret was terrible as AD. Hayden is like Carl Rove of the GOP.

Spartans have same mascot theme as Trojans ( just swap colors to the helmet). will that make Stanford mire angry or weak in the knees?

You get that far to where you will more than likely go into the championship judging on your winning streak of how many?24. Then you go and lose I’d hate to be in Ohio states shoes!

Bryan, coulddu, woulddu, shoulda, but they did not!. This could be said for Alabama, Oklahoma State, Texas and a host of others. Ohio State could not have defeated anyone of the top six teams ranked by the BSC.

Florida State in the BCS Championship Game against a One-Loss Team?

Or does the Computers says that there will be a Alabama Auburn rematch, it´s just about the numbers.

If Jameis Winston had been arrested, do you think that Florida State would be where they are now? NO, they wouldn’t.

They got “Rolled” Jim by a superior AUBURN team.
Bammer again plays only 5 of its 12 games with schools with a winning record in 2013. They play powerhouses like FL Atlantic, Sou Miss, WVA, Western Carolina, The 2014 “Iron Bowl” they must face Gus Guns again. Maybe Satan will have a field goal kicker by then. LOL
War Damn Eagle! Whine Bama Whine!

War Damn Eagle, Katherine. Gus has to be the National Coach of the Year too (already selected SEC Coach of the Year). Tre Mason will be in New York for the Heisman! Reese Dismukes nominated for Rimington Trophy (best center).
Can it get any better for Auburn? Two BCS championship appearances in 4 years. That’s Gus abilities.
I love my AUBURN Tigers! Wait until signing day next Feb. AUBURN will have another Top 5 class. 12th now with only 18 commitments.
WAR DAMN EAGLE!

this shit is hilarious Cmon Buckeyes start the dynasty right here and right now. Jimbo Fisher is a legend in his own mind.