Florida and Michigan to meet in 2017 Cowboys Classic 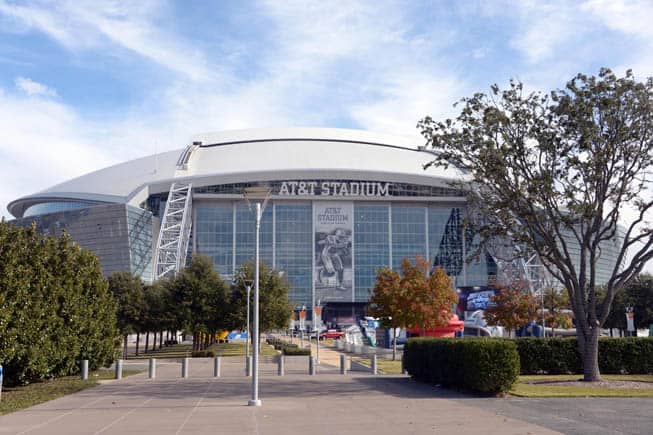 The Florida Gators and the Michigan Wolverines will meet in the 2017 Cowboys Classic, both schools officially announced this morning.

The game will be played on Sept. 2, 2017 at AT&T Stadium in Arlington, Texas. It will be the season-opener for both schools and will be televised nationally in prime-time.

Word of the Florida-Michigan match-up was leaked by the Big Ten in October. The conference accidentally posted a chart of their entire non-conference schedule through 2025, and this was one of the games listed.

Florida and Michigan have met twice previously, both in bowl games. The Wolverines defeated the Gators 38-30 in the 2003 Outback Bowl and 41-35 in the 2008 Capital One Bowl.

“We are excited to make a return trip to Dallas for the Cowboys Classic against Florida,” said Michigan head coach Brady Hoke. “This is a great way to reach our fan base in the south and to continue to expand our recruiting efforts in the state of Texas. Our goal is to have as many Michigan fans at the game as possible. Florida has been one of college football’s best programs over the past 20 years, and we are excited to face the Gators in a regular season football game for the first time ever.”

“This is a great opportunity to expose the University of Florida nationally, playing one of the greatest programs in the history of college football, I think a tremendous trip for our fans,” Florida athletics director Jeremy Foley said. “It would give us great national visibility. Obviously, a very difficult ballgame against a storied program — that excites us.”

The addition of Florida completes Michigan’s 2017 football schedule. The Wolverines also have non-conference games set vs. Cincinnati on Sept. 9 and Air Force on Sept. 16. Conference games include Michigan State and Ohio State at home and Penn State and Wisconsin on the road.

Florida now has their first announced non-conference game for the 2017 season. The Gators should also host Florida State to close the regular-season.

every team plays out of conference for bowl games. EVERY TEAM. he said regular season bro. it’s not a big deal but it’s something that has been noted for years and now Florida breaks that trend. good for them.

and more than anything, good for the fans of both of these programs. I know people are all about the money and this and that. but these kinds of match-ups are really appreciated by the fanbases!

Two programs that were once the leading football power in their respective states trying to reverse their spiraling decline into mediocrity.

Is this so they don’t have to play Georgia Southern or App State? Hahaha ;) GO EAGLES

i would love to hear from gville merchants about this f’ing asinine game and the city of gville for its annual budget I don’t
want or need this game for UF to be a premiere program…why?

Glad to see the SEC in these early season “kickoff” type games on neutral fields against big time schools. Florida already plays Florida State every season along with the SEC schedule and now Michigan should really help the strength of schedule that the new CFP committee will be looking at more when selecting schools. Kudos to the SEC and Big Ten conferences.

Agree. It seems that this will become the norm during the College Football Playoff era. Most big schools want to have 7 home games each year, and this is a way to play a marquee non-conference opponent without having to give up a home game in a home-and-home series.