Favorite Non-Conference Scheduling Targets for each Conference in 2014 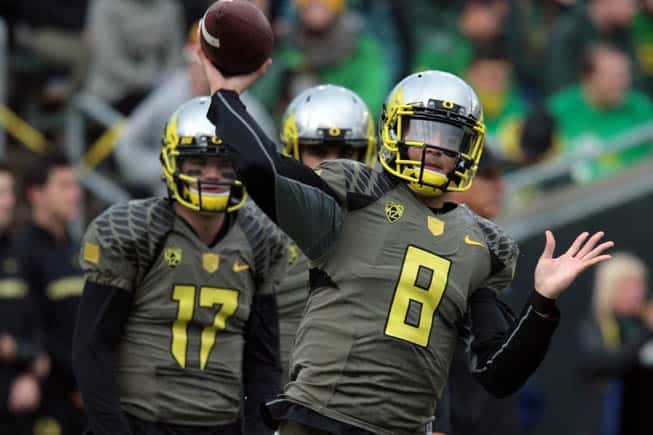 Though there has been much ado about the quality of non-conference play in college football, what about quantity?

Do conferences collectively have favorites when they put together their non-league schedules and, if so, which conferences are most likely to call on one another for a friendly home-and-away series?

The following list highlights non-conference scheduling tendencies for the 2014 season. The numbers give us insight into which power-five leagues rely on which specific smaller conferences to fill their non-league slates.

The two conferences most likely to clash in the 2014 regular season are the Pac-12 and Mountain West.

Of its 29 non-league games against FBS teams this season, Pac-12 members have 12 scheduled against the Mountain West. Coming in second are Big Ten foes and Independent teams, with five Pac-12 games each.

The good news for the Pac-12 is a 71% all-time winning record against current members of the Mountain West.

The flip-side of the Pac-12/Mountain West relationship is that MWC members have 12 of their 41 non-league games slated with Pac-12 teams.

The difference in percentages comes down to MWC teams playing four non-league games each season vs. only three for Pac-12 teams.

Coming in second for Mountain West members in 2014 is the Independent contingency, which will play seven games against MWC members.

Gluttons for punishment, the combined membership of the Sun Belt conference has a whopping 10 of its 35 total non-league games in 2014 scheduled against SEC members.

The situation looks even more sinister when you throw in that current Sun Belt members are 11-199-4 all-time against current SEC members. That’s 6% for anyone keeping track.

The Sun Belt’s second-most popular target in 2014 is the ACC, which has eight games lined up with Sun Belt members.

An arrangement that makes lots of sense from a geographical standpoint, the MAC has 10 of its 38 FBS non-conference games scheduled against Big Ten members in 2014.

What makes less sense is scheduling almost 30% of your non-league games against a conference which you have a 15% history of winning games against.

The second-favorite league for the MAC schedulers in 2014 comes down to a three-way tie between the ACC, the SEC and Conference USA, which each squeezed the MAC for five games this season.

The mighty SEC has 10 of its 41 total FBS non-league games scheduled against Sun Belt members in 2014.

The other league most likely to play the SEC this season is Conference USA, which will show up to eight games against Murderer’s Row. To put this into perspective, the SEC has a 70% all-time success rate against C-USA. After that it’s a tie between the ACC and the MAC with five games each.

The Big Ten’s favorite target in 2014 is the MAC, which accounts for 10 of its 43 FBS non-conference games this season.

Up next is a three way tie—at five games apiece—between the Pac-12, Independents and American Athletic.

The 10 teams of the Big 12 reached out most often to the teams of Conference USA in 2014, scheduling five of its 22 FBS non-league games with C-USA members.

Current Big 12 teams have a 68% all-time advantage over C-USA teams.

The next most likely candidate for the Big 12 is the SEC, which has four games slated with its members in 2014.

Though not as extreme as the Sun Belt’s scheduler’s commitment to overmatched games, the boys over at Conference USA have eight of their 43 FBS non-league games slated with the SEC.

C-USA members are a respectable 30% all-time against the SEC, making the future seem at least not-so grim.

The next most popular target for C-USA in 2014 is a three-way tie between the Big 12, the Independents and the MAC, each with five games apiece.

The most likely FBS non-conference matchup for an AAC team in 2014 is with a team from the ACC.

The American Athletic has six of its 34 FBS non-league games slated with ACC teams, a league its current membership is 33% all-time against.

The second-most likely non-league target for AAC teams this season is either the Big 12 or Independents, each with five games.

The number of FBS Independents in 2014 is back down to four—Army, BYU, Navy and Notre Dame. The favorite scheduling target of these four teams combined is the Mountain West with seven games.

Next up is the ACC with six games, four of which are due to Notre Dame’s new arrangement as quasi-members.

What helps the ACC earn the award for the most evenly spread non-league schedule in 2014 is its new arrangement with Notre Dame, accounting for four of its six games with Independents this season. The ACC is 55-134-3, or 29%, all-time vs. Notre Dame.

Coming in fourth place behind the Independents, American Athletic and Sun Belt is the MAC and the SEC with five games each.

You have to love that analysis in this article…NOT. What’s the point?

It’s about numbers. They speak for themselves, no analysis is necessary.

This kind of article is why I love this website. You don’t see this kind of analysis on ESPN. Thanks for putting this together, Amy!