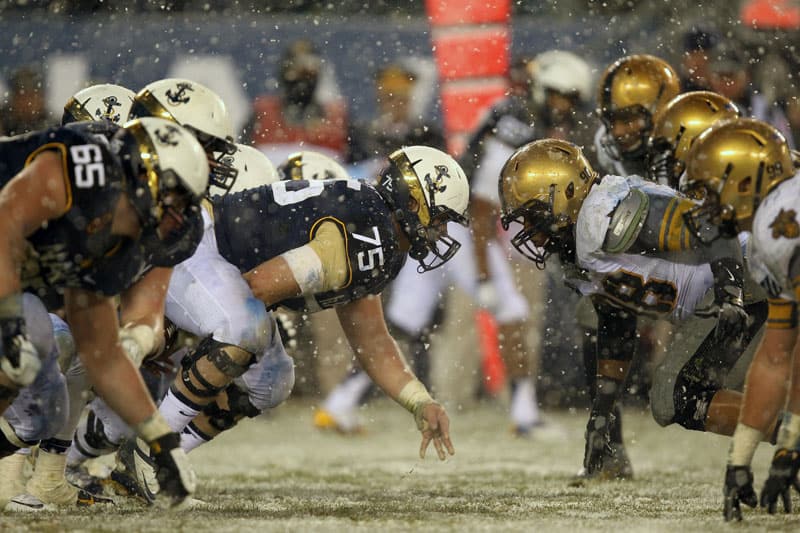 Though the first-ever CFB Playoff bracket has been seeded and the bids for the other 36 postseason games have been mailed out, the regular season isn’t over

That’s right, the presumptive force that is big time college football has left one game out of the mix, the 115th playing of Army-Navy.

If either of these teams ever make a perfect run, something Army hasn’t done since 1958 and Navy hasn’t achieved since 1926, this game would screw up the timing of the entire college football postseason.

No matter what happens this Saturday, Navy is set to play San Diego State on Dec. 23 in the San Diego County Credit Union Poinsettia Bowl, while for the fourth-straight bowl season Army sits home.

Though this game obviously affords the winner bragging rights, it won’t decide the Commander-in-Chief Trophy, awarded to the winner of the triangular-series between the three FBS service academies. That honor goes to Air Force, beating both Army and Navy earlier this season.

The series dates back to 1890, when Benjamin Harrison was president. Navy won the first game 24-0 in West Point but dropped the next meeting, in 1891, in Annapolis.

What has hurt both programs in the modern era is keeping up in the recruiting race, a task made decidedly more difficult by the military commitment required of service academy enrollees.

Both have struggled defensively this season: Army is No. 84 in scoring D, while Navy is No. 89. The Black Knights are No. 94 vs. the run, while the Midshipmen rank No. 98.

The real difference between the two is that Navy has been able to score points more consistently, ranking No. 33 in offensive scoring (34.5 per game) while Army ranks No. 84 (26.3).

What you’re not going to see is a bunch of penalties, as these disciplined squads both rank among the top 15 teams in the nation in fewest penalty yards: Army is No. 14 while Navy is No. 1.

This game will come down to who can stop who on the ground. In fact, Navy has had the better rushing defense in every one of its 12 consecutive wins over Army with the exception of 2010, when the Midshipmen held opponents to 165.8 ground yards per game vs. the Black Knights’ 139.2 mark.

It’s no coincidence that the Black Knights had far-and-away the better rushing D when they last sank Navy. That was in 2001, when Army held its opponents to 168.6 ground yards vs. Navy’s 243.1.

Though on paper this gives Army the edge to upset Navy (its holding opponents to 191 yards per game vs. Navy’s 199), keep in mind that the Black Knights have earned their defensive stripes against nine FBS teams that on average rank No. 78 in rushing offense while the Midshipmen’s 10 FBS opponents combine for a No. 54 rank.

Included on Navy’s resume is a 52-19 win over Georgia Southern, the No. 1 ranked rushing offense in the FBS.

The other decisive stat is third down conversions where Navy ranks No. 20 in the nation (46.51%). The Midshipmen have only lost one game when they’ve converted better than 47% of their third down attempts, the 31-24 loss to Rutgers when they went 50%.

For Army, that means holding Navy to less than 47% on third down, something it’s managed to do six times this season, going 4-2 on those occasions.

On offense, check out Navy quarterback Keenan Reynolds (#19), with 1,082 yards he’s the top rushing quarterback in the FBS. He’s gone over the 200-yard mark twice this season, hanging up 251 rushing yards and three scores in the win over San Jose State and 277 and a whopping six rushing touchdowns in the rout of Georgia Southern. For Army, its senior running back Larry Dixon (#26), playing his final collegiate game, No. 43 in the nation in yards per game (92).