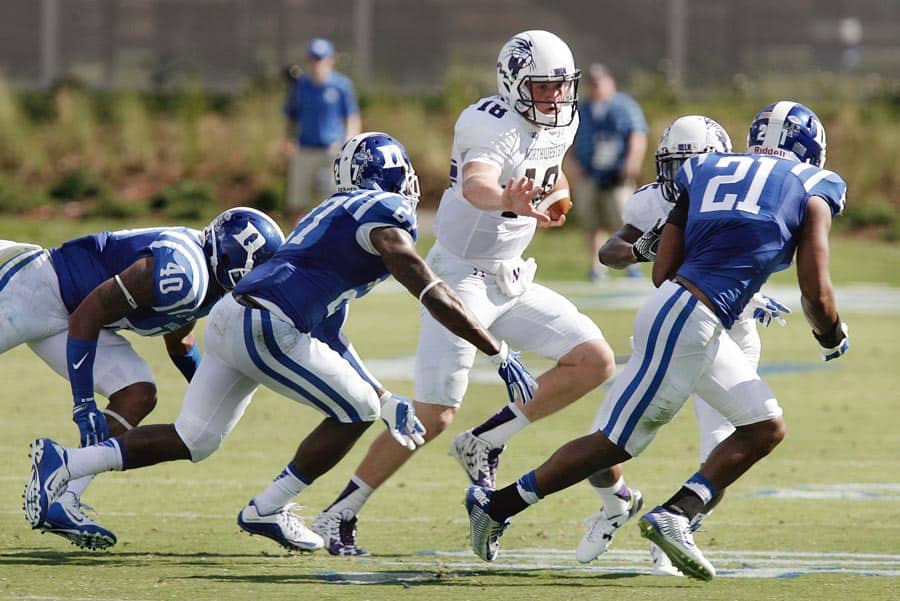 The Duke Blue Devils and the Northwestern Wildcats have scheduled a four-game football series for 2021 through 2024, The Durham Herald-Sun has reported.

The two schools have met a total of 17 times on the gridiron. Northwestern leads the series 9-8 and has won the last two meetings and seven of the last eight.

The Durham Herald-Sun has also reported that two Duke football games in 2017 have changed dates. Duke was previously scheduled to host Baylor on Sept. 23, but the game has been moved up one week to Sept. 16.

Duke was also scheduled to visit the Army West Point Black Knights next season on Sept. 30. That game has been pushed back to Nov. 11, which the Herald-Sun notes is Veteran’s Day.

Seems like the worst of the P5s are playing each other. (Apologies to Kansas-haters.)

Duke & Northwestern have gotten better over the years.

There should be some kind of rotating series among Duke, NW, Stanford, and Vanderbilt.

They pretty much are, and you can throw in Notre Dame and Rice to your list. These schools tend to schedule each other for OOC because they have close faculty ties and often hire people from each other (similar experience in recruiting and operations).

Im a B1G fan. Purdue is by far worst right now in the conference.

Shep: Northwestern has said that they want to play teams that are top academic institutions also. There are some top academic institutions who will lower the academic admission standards a lot to get in a football player, but the teams on your list do not. Note that the list doesn’t avoid good football teams (playing Stanford who has been a consistent power) though on the gridiron, Duke has not been outstanding and Vandy is near the bottom of the SEC (academically, Vandy is the top of the SEC). None of these teams at ‘my’ team, but I admire the thinking behind this scheduling.

Yep, very similar schools in terms of academic cache where it is quite feasible that these student athletes could be attending one of the others for graduate school. Just like I think everybody would enjoy a landgrant school pool – Michigan State, Texas A&M, Clemson, and Cal would be nice pairings across the country. You could also have a “State” one – Penn State, LSU, FSU, and ASU.

I’m not in the US so you may need to state the obvious here – why is it interesting to have the schools that were given land play each other? Do these schools have resulting similar cultures or another similar resulting attribute? Thanks.

@dbrunstheworld I’m referring to more of a theme to lean on to generate interesting match-ups, similar to the “State” schools. Many of them share similar attributes, but they’re all vastly different but the pool of schools I chose would be entertaining on the field with one another.

While the ACC has a 8 game conference schedule Duke is in that group of ACC teams which normally play 2 OOC games against P5 opponents. Good to see that sort of scheduling.