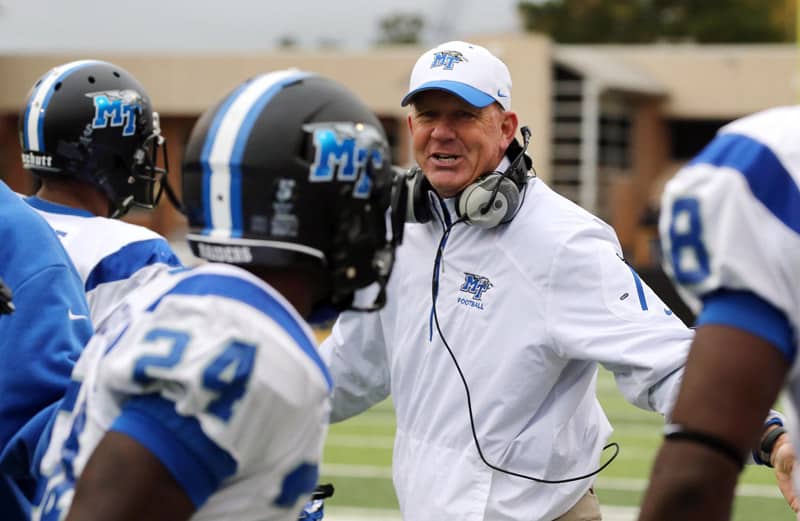 The Duke Blue Devils and the Middle Tennessee Blue Raiders have scheduled a home-and-home football series for 2019 and 2020, MTSU announced today.

The 2019 contest will be the first ever meeting between the two schools on the gridiron.

“This should be an exciting series for our fans as we continue to bring quality non-conference opponents to Murfreesboro,” said MTSU Director of Athletics Chris Massaro. “Duke continues to grow its program under David Cutcliffe and we look forward to hosting another power conference member.”

Duke will be only the fourth ACC school to play in Murfreesboro, following Georgia Tech, Maryland, and Virginia Tech.

The Blue Devils are the first announced non-conference opponent for Middle Tennessee for both the 2019 and 2020 seasons.

Duke is currently scheduled to host Tulane in 2019. Middle Tennessee is their first announced opponent for 2020.

I heard they are making “The Longest Yard,Part 2” with the Bulldogs playing the cons…..*W*

Duke and power conference…..what a joke THAT is!! *LOL*

You could have talked the same trash about Northwestern and Stanford a few years back, and they both built excellent programs. Duke is a little behind them, but has a great chance of catching up.

For the guy that said “Duke and power conference…what a joke” Duke beat Miami, Virginia Tech, North Carolina, and Johnny football barely beat them by 4 points on a miracle Johnny football play, they this year just completely crushed Kansas out of the Big 12 and played their 3rd stringers ha…So unless you don’t consider the SEC and/or the Big 12 as power conferences…then your lack of analyzing information is a “Joke” lol. Might as well throw the Big Ten in there too since Virginia Tech just went into Columbus and beat Ohio State on their home field. Silly Michael. haha