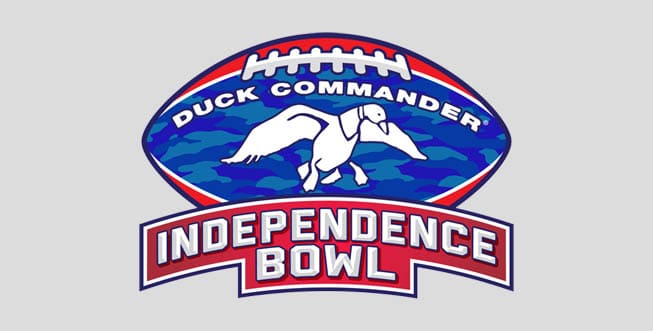 Duck Commander, a family-owned manufacturer of duck calls and more, is the new title sponsor of the Independence Bowl.

The game will be called the Duck Commander Independence Bowl and it will be played at the Independence Bowl in Shreveport, Louisiana. Teams from the ACC and SEC will typically be matched up, but the bowl does have secondary agreements with C-USA and The American.

“The Independence Bowl is proud Duck Commander has agreed to become our new title sponsor,” said current Bowl Chairman, John Hubbard. “Their success has been phenomenal. As we both explored this opportunity, it was clear this national and growing worldwide success could help bring new business relationships to the Independence Bowl and enable us to showcase Louisiana as a Sportsman’s Paradise.”

The Robertson family, including founder Phil Robertson and CEO Willie Robertson, are featured in the no. 1 cable television show Duck Dynasty.

“College football is very important to us, both as fans and former players. The Independence Bowl is what college football is all about: It has great tradition and it’s All-American,” said Willie Robertson. “Add in its Louisiana location and appreciation of the military and it creates a winning partnership for both parties, It’s especially exciting to see our brand help the Independence Bowl create an awesome fan experience.”

The NCAA has no business affiliating themselves with these bigots.

Bowls are independent of the NCAA, and can be either profit or non-profit, just FYI.

On that note, let’s please not debate issues other than football here. Thanks.

The real Bigots are people like you,who don’t think people have right to believe different than you and your liberal buddies. At least he has the guts to back up his religious beliefs, whether you or I agree with him.

I don’t think you understand what “back up” means… usually it implies facts.

Traffic Demon judges them as bigots. I did not know you were chosen to judge others ! How do you judge yourself ?

There still are people out there who still believe in truth, justice, and the American way. Thanks Phil for being one of them.

Seriously, just ignore the logo and enjoy the game.They always had a nice field painted.

Phil Robertson started ahead of Terri Bradshaw for a couple years at Louisiana Tech. Not only is Phil a man of great faith and courage, he also was quite the quarterback back in the day. Kind of neat to come full circle like this and see him back in football as it were.

Duck commander and Football, Can’t get much better than that!