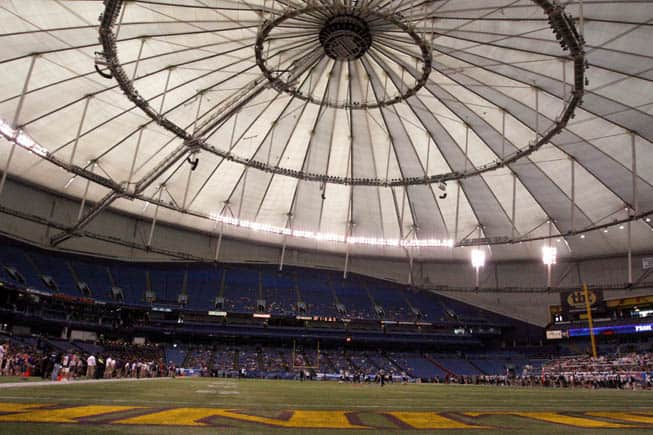 Brett McMurphy of ESPN has announced the dates and times for three more 2014 bowl games, which brings the total number of postseason games with confirmed dates to 18.

The inaugural Boca Raton Bowl has been set for Tuesday, Dec. 23 at 6pm ET on ESPN. A team from C-USA will meet a MAC team at FAU Stadium, the home of the Florida Atlantic Owls.

Teams from the ACC and American Athletic Conference (AAC) will meet in the Beef ‘O’ Brady’s Bowl St. Petersburg at Tropicana Field on Friday, Dec. 26. The game will kickoff at 8pm ET on an ESPN network.

The third game announced today is the Sheraton Hawaii Bowl, which features a C-USA vs. MWC matchup. It will be played on Christmas Eve, Wed., Dec. 24 at Aloha Stadium in Honolulu. Kickoff is set for 8pm ET on ESPN.

Earlier this week, dates were announced for the Alamo, Holiday, and Poinsettia bowls and the new Bahamas Bowl.

I really think that there is way too many bowl games, it should be to reward programs for a great season not a meteoric one …. To be honest I was hoping that onces there was a playoff format that the number of bowl games would be reduced not increased!

There are also more FBS teams. Look how many teams have joined just in the last 10 years. I understand everyone wants quality, but the NCAA, ESPN, and these colleges and universities want to make money. I love to see more bowl games every year. Gives me lots more entertainment. The only complaint I can make, is that ESPN is pretty much in control of the whole “bowl season” market. I’d like to see more games on free networks, such as Fox, NBC, ABC. So that everyone can enjoy.

ESPN is in control of the whole season.