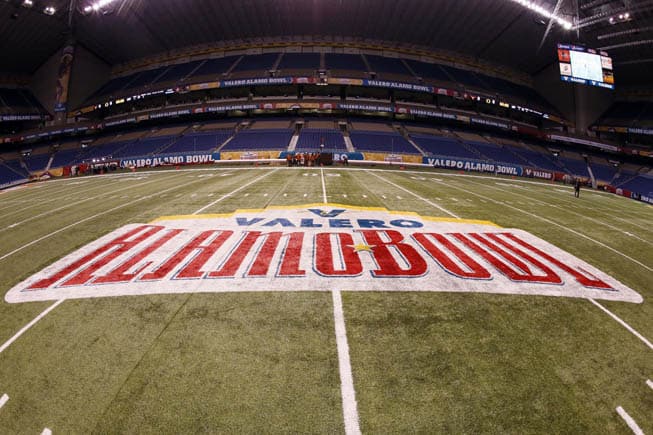 The Alamo Bowl will be played on Jan. 2. (Soobum Im-USA TODAY Sports)

“This year’s calendar provided us an excellent prime time Friday slot to showcase the Valero Alamo Bowl’s improved match-up featuring the top teams from the Big 12 and Pac-12 conferences after the College Football Playoff,” said Derrick Fox, Valero Alamo Bowl President/CEO. “Our renewal rates are the highest in our history as fans are excited to welcome Top 25 teams to play in front of capacity crowds at the Alamodome.”

Due to the College Football Playoff beginning this season, several bowls will be moving around the calender and off of dates that fans have become accustomed to.

The two semifinal games will be played on Jan. 1, 2015 and will be hosted by the Rose Bowl and Sugar Bowl. Three other bowls are also slated for Jan. 1 — Capital One Bowl, Outback Bowl, and AT&T Cotton Bowl Classic.

The National University Holiday Bowl, which pits the Big Ten vs. the Pac-12, will be played on Saturday, Dec. 27, 2014 and will be televised by ESPN at 8pm ET.

“This is shaping up to be an exciting bowl game season for us here in San Diego,” said Vincent Mudd, president of the 2014 San Diego Bowl Game Association. “The return of a powerhouse team from the Big Ten to the National University Holiday Bowl promises renewed excitement for our community as well as for fans traveling to our great city. We also mark a big milestone as we celebrate the 10th year of the SDCCU Poinsettia Bowl. To welcome Navy back is the perfect way to honor the anniversary.”