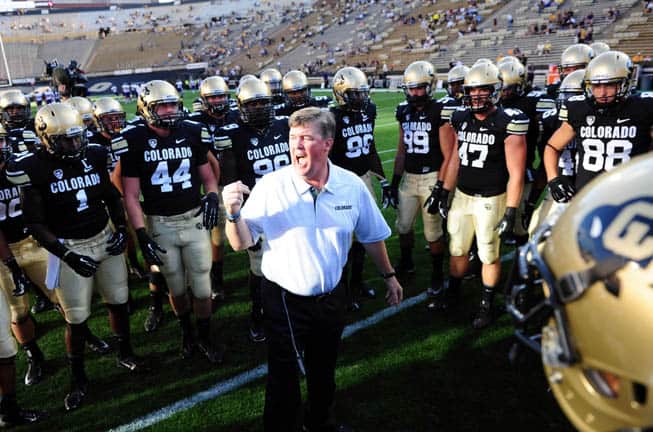 The Colorado Buffaloes have replaced their postponed 2013 game against Fresno State with a contest against the Charleston Southern Buccaneers, CU athletic director Rick George announced Monday.

Colorado and Fresno State were set to meet on Sept. 14, but the game was postponed due to flooding in Boulder. Colorado will now host Charleston Southern at Folsom Field on Oct. 19.

TV and kickoff time will be announced on Oct. 7, and tickets for the Fresno State game can be used for admission.

A future date for the Colorado-Fresno State game is still being worked on, but obviously the two teams will not play this season. The 2013 game was part of a two-for-one contract that began last season in Fresno. The third game is slated for Sept. 14, 2019 in Boulder.

Per the release, Colorado officials contacted “nearly three dozen schools on both the FBS and FCS levels” with the stipulation that the game be played on Oct. 19.

After receiving a waiver from the NCAA allowing them to count two wins over an FCS school towards bowl eligibility, the Buffaloes finalized a contract with Charleston Southern. They sought that waiver because they have already played and beaten an FCS school, Central Arkansas.

Colorado is currently 2-1 on the season. They host offensive juggernaut Oregon this weekend and then travel to Arizona State on Oct. 12.

After hosting Charleston Southern, the remainder of Colorado’s 2013 schedule looks like this: vs. Arizona, at UCLA, at Washington, vs. California, vs. USC, and at Utah.

Fresno State continues to look for an opponent to replace Colorado on their own 2013 schedule. Their options are limited, and CBSSports.com’s Jeremy Fowler says it isn’t looking good.

The Bulldogs have open dates on Oct. 12 and Nov. 16. December 7 is a long-shot because Fresno could play in the inaugural MWC Championship Game that day.

Why not play December 14th? Navy and Army do it.

Central Arkansas, Charleston Southern, AND U.S.C. in the same season? Buffalo season ticket holders must be pinching themselves.

They do play #2 Oregon, #12 UCLA, #15 Washington, #22 ASU. Along with Utah, Az, USC who all have winning records. Who are they suppose to get to come to Boulder? Bama or Ohio St?As the article said, it’s on short notice they did the best they could

Why couldn’t FSU and Colorado agree to play the first weekend in December if neither school was in their conference championship game? Nicholls St. and Oregon St. did that last year? I don’t get it. But, I do think Fresno St. may well be playing in the MWC championship game.

Odds are Fresno State will be in the MWC Championship game.

What Teams have the same Off week as Fresno?

both schools could have easily agreed on a last minute neutral site game in Salt Lake City, Las Vegas, or Denver—Fresno has been iffy with their wins, but probably needed another win over a BCS team to get into a better bowl game. I don’t like the NCAA waiver for Colorado in this case. four wins over FBS and two over FCS? C’mon!!!!

You do understand there was a catastrophic flood in Boulder County that cancelled the original game right? This was an originally scheduled home game for CU. CU played at Fresno last year and this was the return trip that they contracted for. None of the teams Fresno plays this year are ranked. While CU plays Oregon this weekend, Fresno plays Idaho? Cu plays 4 ranked teams in the coming weeks while Fresno battles a bunch of MWC teams that are no better than fcs schools.

Why play in salt lake or vegas? all the fans and students have to travel then, it is not a bowl game. the 2 schools couldn’t come to an agreement on rescheduling the game this year, I would have preferred to see Fresno play CU or play another mid major team.

Sure CU plays oregon this week and Fresno plays Idaho but a couple of weeks ago Fresno played Boise State and that was after they played Rutgers, granted neither of those teams are as good as Central Arkansas… oh wait what was your point again?

Hey Bret, do you really want to compare Fresno’s schedule to Colorado”s?. Before we go game by game, consider that the WMC went 0-10 against the PAC 12 this season. Never mind, clearly there is no need to do a game by game comparison.

Charlotte has a open date nov 16

Air Force and CU to play October 19 would have been a fanstastic match up!

Army has an Open date on Nov. 16, and they are entitled to have a 13th game since they play at Hawai’i, but didn’t schedule a 13th game (same as Fresno, SDS, & SJS)