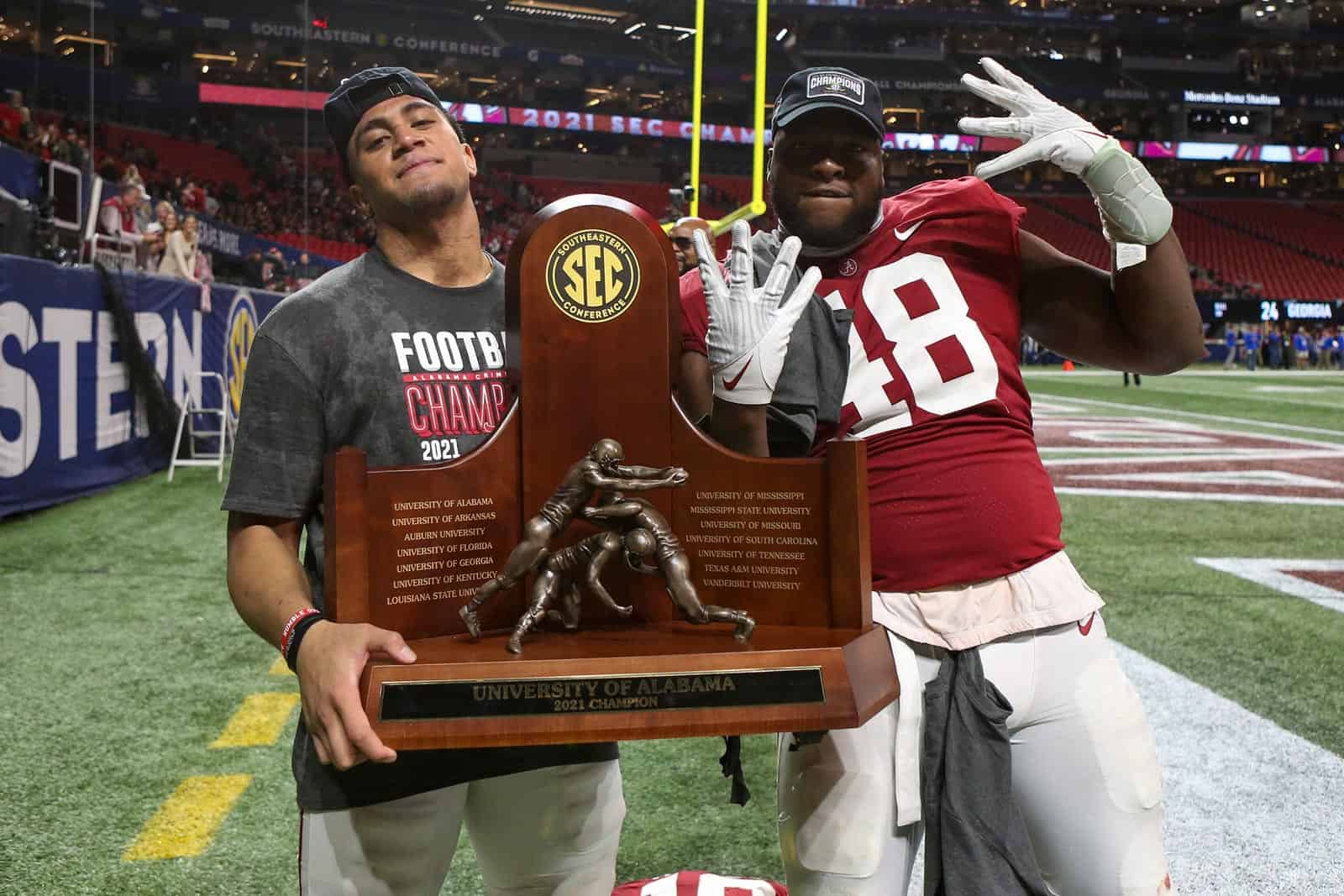 The Alabama Crimson Tide have taken over the top spot in the AP Poll following their 41-24 win over the previously unbeaten Georgia Bulldogs in the SEC Championship Game.

The Georgia Bulldogs dropped two spots to No. 3 after the loss, their first of the 2021 season.

The Notre Dame Fighting Irish are ranked fifth and they are followed by the Baylor Bears in sixth.

The College Football Playoff Semifinal matchups will be revealed today at 12:15pm ET today on ESPN. The field is expected to mirror the top four of the AP Poll.

As the likely top-ranked team in the playoff rankings, Alabama will get their choice of playoff semifinal locations between the Goodyear Cotton Bowl Classic in Arlington, Texas, and the Capital One Orange Bowl in Miami Gardens, Fla. The Crimson Tide will probably pick the Cotton Bowl and should face off against Cincinnati.

That would leave Michigan and Georgia squaring off in the Orange Bowl.

I don’t know whether you have an AP 63 sports reporter or editor Vote? Even if You Don’t, the inclusion of All of the Teams who faded & lost 2 of the 3 last Games they played in the regular season or season end + conference playoff for C ollusive F ive P rivilege Administration, LLC’s Final Rankings are Exclusive Discrimination in your Face.

The 2 SEC Teams with 4 Losses & not even in the National Picture? The many 10-3 Teams who were smoked in their Conference Championship Game after losing equally Big the 12th or 13th Game of the regular Season? The more than one 9-3 Teams who weren’t champions in their League at any Level.

Because of this a 12-1 Team UT Roadrunners is left out, or additionally a 10-3 MW Champ who is peaking the last 2/3 of the Season is not mentioned.

At least AP 63 Writers can be indirectly unofficially collusive in their Voting.
If FB loving Fans, I count as one of these, will Vote against this popular collusion by paying for, patronizing with my Wallet 1-A Football programs which have merited Popularity in Winning Ways which are above average, excellent, consistent, exciting, high football IQ, respect for the Game, behaviors, performances on & off the Field then the 2021-2022 post Season can be economically steered to reward these Winning physical, emotional, intelligent Programs.

I do not vote in any polls and am not a member of the Associated Press, as far as I know!

The AP electors neglected a very strong MW Conference, the top 4 stronger than in many years.
The Collusive Five Privilege Admin., LLC excluded the strongest Sunbelt UT Roadrunner Team who was strong & a Winner after a Full Season last year as well. You don’t win/lose 12-1 Games this Season as an unmerited weak Brother. The Sunbelt covers the same basic Footprint as the S E C. Look at All the 9-3, 8-4 s e c Unis in the Top 25 Ultimate Poll.