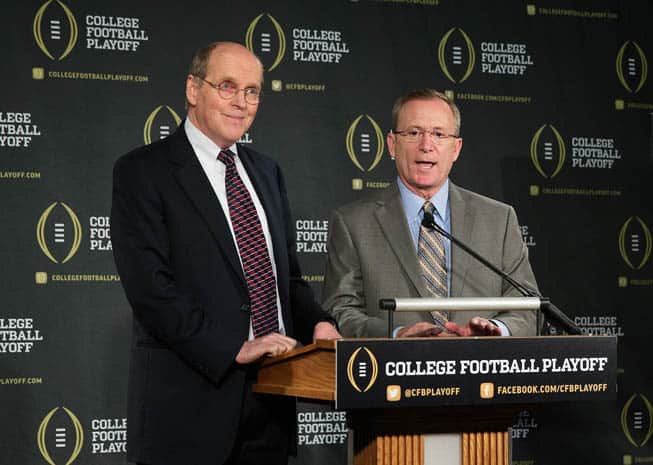 The College Football Playoff committee met yesterday in Irving, Texas to discuss several items, and one of those was strength of schedule and the debate over eight or nine conference games.

Executive director Bill Hancock addressed the issue and provided a little more clarity to the situation.

Hancock’s response indicates that teams with eight-game conference schedules, the SEC and likely the ACC, won’t be dinged for having one less game than the Big 12, Pac-12, and Big Ten (starting in 2016).

Schedules should, as we have stated previously, be taken as a whole. A nine-game conference schedule with a mix of three lower tier FBS teams shouldn’t automatically outweigh an eight-game schedule that includes two games against power conference/Group of Five teams.

The challenge will be for those that do play eight games to schedule tougher in the non-conference so that they don’t put themselves in a tough position come selection day.

Due to the strength of schedule mandate that was announced on Sunday, the SEC will need to schedule a little tougher in the non-conference. Teams must now play a non-conference game against a Group of Five team (ACC, Big 12, Big Ten or Pac-12 plus Notre Dame) every season.

Strength of schedule will be one of the factors the playoff committee uses to select the four teams, although they stopped short of laying out any requirements.

“The (selection) committee will not be in the business of dictating to conferences how they ought to do their schedule,” said Hancock.

According to USA TODAY, Hancock “added that in the interest of transparency, he expects the selection committee would disclose whether a team was selected over another because of a more difficult schedule.”

“Absolutely,” he said. “I’m sure that will happen.”

When that does happen, teams should have a good idea moving forward on how they should craft their future non-conference schedules. Teams have no control over the conference portion of their schedule.

Also yesterday, Brett McMurphy of ESPN reported that the first College Football Playoff Rankings will be released on Tuesday, Oct. 28 and weekly thereafter until after the games of Dec. 6.

So we will know if SOS was a determining factor – that is good.

Why can we NOT know the rankings by individual committee members? I thought this was supposed to be “Transparent.”

This is about as transparent as the computer rankings – someone remind me why it had to change?

I like the fact this committee is waiting for everyone to play seven or eight games before “ranking” them…..and I hope this committee ignores the preseason/September polls. Those top 6 teams always had an unfair advantage w/the BCS committee.

Kevin, I’m pretty sure the “Group of Five” label belongs to the AAC, MWC, MAC, Sun Belt, and C-USA; as in, the best Group of Five champion gets the bid to one of the Access Bowls

The SEC only playing 8 conference games so most of it’s members missing out on playing each other should not catapult them into the playoff. What I mean is, the champion of the conference did their thing, and they should be rewarded for it. Other teams who missed out on all of the top teams and finished with a “good” record shouldn’t be rewarded for missing most of their conference. Since they didn’t go to 9 games, there will be less overall losses for SEC teams. More SEC teams will finish ranked higher because they dodged each other. This should not benefit the conference while other conferences are ending up with more losses because they play more games.

I hope the Playoff actually has this on their minds before picking teams. The SEC is trying the coward move so more of their teams look good on paper, but it’s deceiving.

Travis, I would agree with you. It could definitely happen.

It sounded like a warning to the eight game conferences to me. This process is to determine which conference champion gets left out so good luck to those who opt for a cupcake schedule.

They are basically saying they will compare and contrast at the end. To me, 9 Pac-12 games + 3 cupcakes would be the same as 8 SEC games, 1 power opponent, and 3 cupcakes.

Most do, some don’t. This is the problem. There is no uniformity wherever you look. It’s impossible to compare schedules when teams don’t play the same common opponent.

My point is let the committee decide who played the tougher schedule at the end of the season, if that’s what it comes down to.

Yeah, and lets hope the committee actually does this and doesn’t just pick teams because of their name.

You’re right with the SOME do and SOME don’t comment. It happens like this in all conferences. I wish they would hold the Power 5 to some sort of agreement making their scheduling formats similar. But I can only wish right…??

I’m guessing the first time a 9-game team gets left out over an 8-game team (probably this year), they might try and issue some sort of mandate.