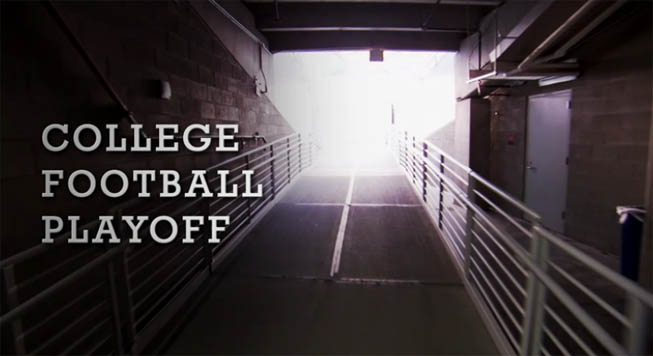 "College Football Playoff" is the official name of the upcoming playoff.

“College Football Playoff” is the new name for the upcoming 4-team college football playoff, which begins after the completion of the 2014 regular-season.

That’s it. College Football Playoff. It’s simple and to the point. Other rumored names such as “National Championship Series” didn’t make the cut.

As Hancock said, and we reported on Twitter earlier today, fans can vote for their choice for the new College Football Playoff logo (see options below). The new logo will become the official mark of the event through the 2025-26 season.

The Rose Bowl and the Sugar Bowl were previously announced as the host sites for the first national semifinal games on January 1, 2015.

The winners of the semifinals will advance to the College Football Playoff Championship Game on Monday, January 12, 2015. The site of the game will be announced Thursday, but it is expected to be Cowboys Stadium in Arlington, Texas.

Listed below is the rotation for the playoffs beginning after the 2014 regular season and continuing through the 2025 season.

It should have been College Football Championship. This name is weak.

National Championship Series was good, too.

OK I guess that works

Fotball Final Four would of been the best. And they got the logo for that too.

At least it is not the “Corporate Sponsor” College Football Playoff, like every other thing associated with sports this day and age. But, give it time and somebody will offer them enough money that they will slap a label on that too.

So the 6 rotating bowls are the Fiesta, Rose, Sugar, Orange, Peach Bowl (Chick-Fil-A), and what???

At least there will no longer be the kind of foolishness that calls UCF vs Baylor a Bowl Game. What a waste of time that will be!

Yeah, What’s with the UCF thing? Baylor is OK, but UCF? why not Western Kentucky or some other unknown

If they want ratings, best not be NIGHT game on New Year’s Eve. That’d be plain DUMB. Would make Jan 1 much more interesting IF played back to back on New Year’s Day. Like 4:30 & 8pm ET.

Just a 4 team playoff? What kind of playoff is that? Should have been at least 8 or 16 team playoff. Basically, this will be the same as the BCS. No real improvement.

An 8 game playoff would be best. Call it anything you want!!

I believe it should be a real play-off team that wins a conference is an automatic bid, I don’t know how many conferences there are but I would take the bowl games and use them as the playoff sites and then rotate the FBS Natoinal Championship Game to be played in a rotation of the sites to all areas of the country or play the current national championship at a stadium near to the University that won the previous year! Because the way these geniuses have set this up are idiots it’s about the atmosphere game day tailgating, the teams, bands and coaches and universities. Play Off those two words mean post season play for a chance to be recognized as the best that year. The rated no.1 team gets a bye making 24 teams eligible to play a first round, that leaves 12 teams, next round 6, next round semi’s No.1 plays the lowest ranked team left, then Championship Game!