College Football Coaches Not to Play After a Bye Week 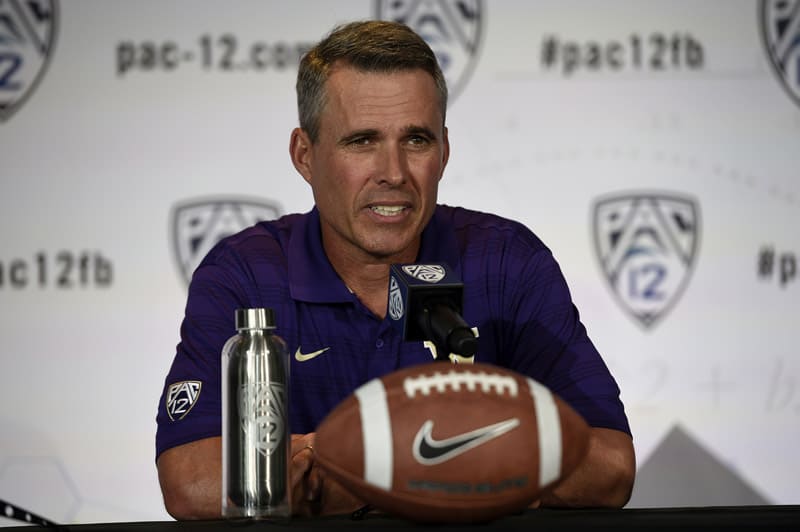 Chris Petersen is 18-2 after an off week. (Kelvin Kuo-USA TODAY Sports)

Though the placement of bye weeks in a college team’s schedule is important, it’s just as crucial that a squad doesn’t meet the wrong opponent, or coach, after they’ve enjoyed a week off.

It’s an under-appreciated scheduling nuance that oozes with potential meaning.

Here’s a look at the 10 most successful FBS coaches coming off a bye week and the teams that they’ll face after an open date in 2014.

You wouldn’t want to meet most of these guys regardless of when or where, but all should be feared after they’ve had seven extra days of rest.

No active FBS coach has been more successful coming off a bye than Washington’s Chris Petersen.

Petersen is 18-2 (90%) after a break and actually never lost a game after a regular-season week off during his eight season run at Boise State. Instead, he dropped two bowl games (the 2007 Hawaii Bowl to East Carolina and 2008 Poinsettia Bowl to TCU) with the break coming between the regular and postseasons.

Only one squad will meet Petersen and Washington off a bye in 2014, Cal, which will welcome the Huskies to Berkeley on Saturday, Sept. 11.

Hugh Freeze has only lost one game after a week off in his four years as an FBS head coach. It came last season, when Ole Miss had an open date after traveling to Texas and beating the Longhorns 44-23 on Sept 14. After the week off the Rebels hit the road to play No. 1 Alabama in Tuscaloosa, a game they dropped 25-0.

Other than that blip on the radar, Freeze has won all six of his post-bye week games.

Not only is Terry Bowden 10-3 all-time after a week off as an FBS head coach, he’s a perfect 2-0 during his two seasons at the helm at Akron.

Bowden’s most recent FBS loss after a bye came back in 1998, his final season at Auburn, when the Tigers took a scheduled week off after losing to No. 7 LSU on Sept. 19. The 14-day break didn’t help Auburn, ultimately falling to No. 3 Tennessee 17-9 on Oct. 3.

The only team which will have to face Bowden and his Zips off a bye in 2014 is Marshall, which will travel to Akron for a Week 4 showdown on Saturday, Sept. 20.

With a 128-25 all-time record as an FBS head coach, it’s no surprise that Urban Meyer has been successful after a week off.

Meyer is 23-3 overall off bye weeks and 3-1 at Ohio State. The most recent such loss came last season when the Buckeyes had almost a month off between the Big Ten title game and their 40-35 loss to No. 12 Clemson in the Orange Bowl.

Both Cincinnati (Saturday, Sept. 27) and Rutgers (Saturday, Oct. 18) will face Meyer and Ohio State after a week off in 2014. Odds for extending his success are improved with both games scheduled for Ohio Stadium in Columbus.

Charlie Strong racked up an 8-3 mark after open dates in his first four seasons as an FBS head coach, a record Longhorn fans hope he can replicate in Austin.

Strong’s last post-bye week loss came at Louisville in 2012, when he led the Cardinals to back-to-back defeats to Syracuse on Nov. 10 and then UConn on Nov. 24.

Yet another head coach with a new job and a successful track record after bye weeks, Steve Sarkisian, like Texas’ Strong, is 8-3 coming off a bye week.

Sarkisian’s most recent loss after a break was in 2012 when Washington had a month off between their win over Washington State in the regular-season finale and their 28-26 loss to No. 20 Boise State in the Las Vegas Bowl.

In 2014, the Trojans are slated to play Oregon State (Saturday, Sept. 27) and Cal (Thursday, Nov. 13) after their scheduled breaks. The Golden Bears also have a bye week coming into their road game with USC.

Four years into his tenure at Florida State, Jimbo Fisher is 7-2 after time off. His most recent loss after a bye week came in 2011 when the Seminoles suffered back-to-back losses to No. 21 Clemson on Sept. 24 and Wake Forest on Oct. 8.

Fisher and Florida State will need to take advantage of their well-timed byes in 2014 to rest up for fellow ACC Atlantic heavyweights Clemson (Saturday, Sept. 20) and Louisville (Thursday, Oct. 30).

Mark Hudspeth has quietly led Louisiana-Lafayette to three consecutive nine-win seasons and a 7-2 mark off bye weeks since taking over as head coach in 2011.

Hudspeth’s most recent post-bye defeat came last season when the Ragin’ Cajuns defeated Georgia State on Nov. 16, took the next week off and fell to in-state rival Louisiana-Monroe on Nov. 30.

After three seasons as the head coach at Houston and two at Texas A&M, Kevin Sumlin is 8-3 all-time off bye weeks and 3-1 as an Aggie.

Sumlin’s last misstep after an open date came last season when A&M beat Mississippi State on Nov. 9, enjoyed a week off and traveled to No. 18 LSU only to lose 34-10.

The Aggies draw Louisiana-Monroe (Saturday, Nov. 1) and, like last year, LSU (Thursday, Nov. 27) coming off their bye weeks this season.

Mark Richt is 24-9 (73%) off bye weeks in 13 years at Georgia, a number that may not seem impressive until you remember that he’s played SEC teams after the majority of his open dates.

Richt’s most recent post-bye defeat came last season when the Bulldogs lost 24-19 to Nebraska in the Gator Bowl after a month off between the postseason and their thrilling 41-34 over Georgia Tech in the regular season finale.

In 2014, Georgia, like Florida State, will need to take advantage of their favorable bye-week placements before divisional games with South Carolina (Saturday, Sept. 13) and Florida (Saturday, Nov. 1).

Does it really matter where the bye weeks fall since teams are generally .500 when coming off a bye week?

another useless statistic by young people in their 20-30s.