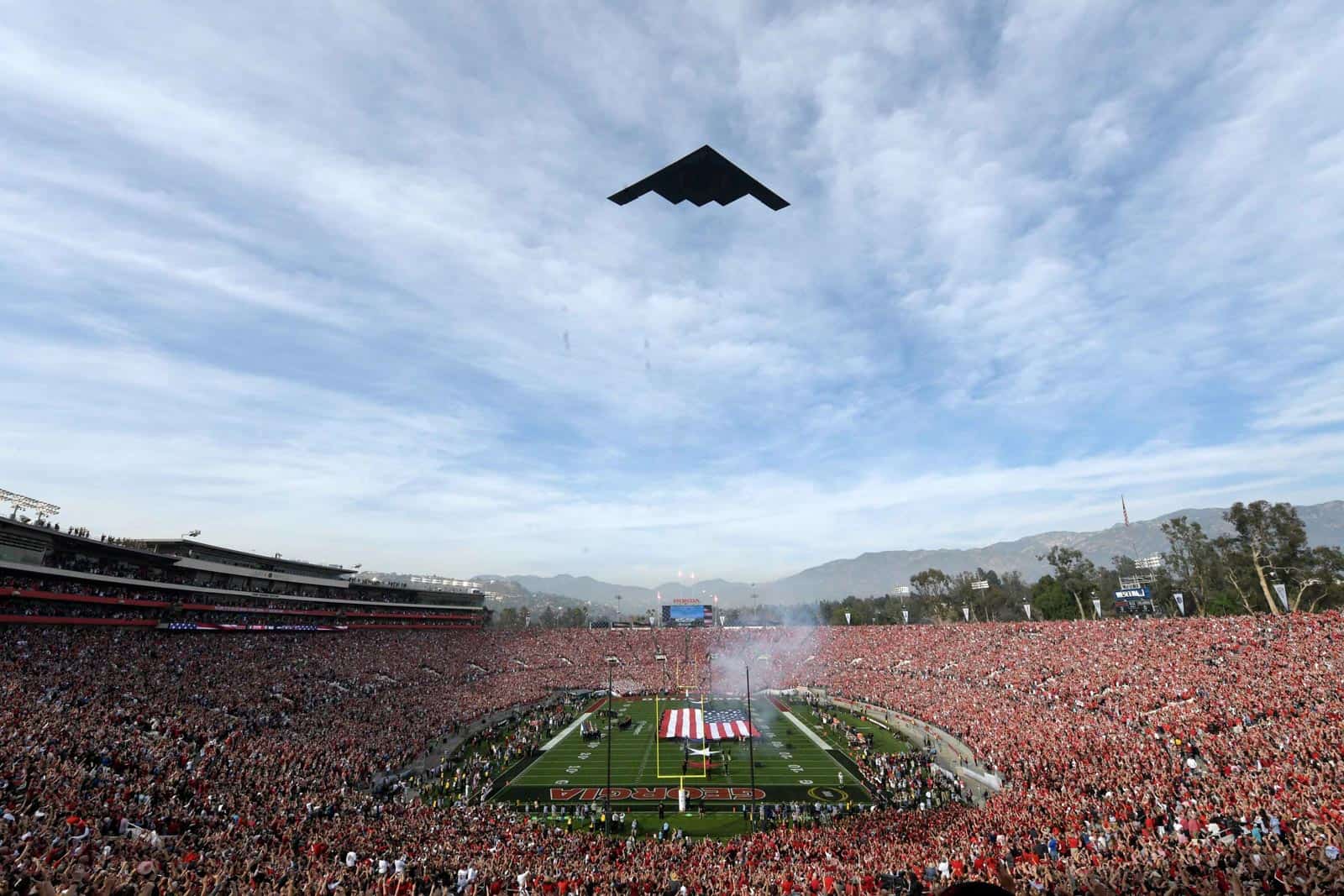 It’s 2019 and what better way to kickoff your New Year than a day jam-packed with college football games?

If that weren’t enough to cure your hangover, four of the five contests featured include ranked vs. ranked matchups. Yep – it’s quality and quantity – an intoxicating concoction sure to please even the most criminally overserved.

Keep in mind that things get started early with the Outback (ESPN2), Fiesta (ESPN) and Citrus (ABC) Bowls all airing between Noon and 1pm EST. After that, it’s the Rose Bowl at 5pm EST and the Sugar Bowl at 8:45pm EST, both on ESPN.

This is the first time Mississippi State and Iowa have met in football. The Bulldogs are 3-9-1 vs. the current membership of the Big Ten while the Hawkeyes are 11-14 against the SEC.

Tune in to this one to see Mississippi State’s rushing attack (No. 20 in the FBS and No. 2 in the SEC) take on an Iowa defense ranked No. 11 nationally vs. the run (No. 2 on the Big Ten). It makes for one of the best strength vs. strength matchups of bowl season. What ultimately may cost the Hawkeyes is their middle-of-the-road offense (ranked No. 47 in the FBS in points). While they’ve managed to score a respectable 31.5 points per game, getting even close to that number will be a chore vs. an elite Bulldog D – ranked No. 1 in nationally in scoring, No. 9 vs. the run and No. 6 vs. the pass.

Mississippi State: senior quarterback Nick Fitzgerald (#7) (No. 2 in rushing yards per game by a quarterback in the FBS), senior defensive end Montez Sweat (#9) (No. 6 in the FBS in sacks).

The first layer of this matchup is gauging how successful UCF will be running the ball vs. LSU’s defense. The Knights are ranked No. 6 in the nation in scoring, No. 5 in rushing and No. 29 in passing. Though these numbers look favorable against a Tiger D ranked No. 22 in scoring, No. 38 vs. the run and No. 44 against the pass – these two teams haven’t played the same caliber of schedule. Case in point, seven of the 12 opponents (or 58%) UCF faced in 2018 are ranked in the bottom third of the FBS in scoring defense. The exceptions are Pitt (No. 79), Temple (No. 46) and Cincinnati (No. 7). The second layer is how the Knights’ rushing D (ranked No. 118 in the nation) will hold up against LSU’s rushing attack. While the Tigers aren’t an offensive superpower, they’ve been more successful on the ground – ranked No. 58 nationally (vs. a No. 81 rank in passing). Again, they’ve achieved these stats against an entirely different set of opponents. Of the 12 rushing defenses LSU faced in 2018, six are ranked in the top third in the FBS (five in the top 30), four are in the second third and only one (Ole Miss) is in the bottom tier.

LSU: senior running back Nick Brossette (#4) (No. 16 in the FBS in rushing touchdowns), sophomore safety Grant Delpit (#9) (tied for the third-most interceptions in the FBS), junior linebacker Devin White (#40) (No. 30 in the FBS in total tackles).

UCF: sophomore running back Greg McCrae (#30) (No. 4 in the FBS in yards per carry), senior defensive lineman Titus Davis (#10) (No. 23 in the FBS in tackles for a loss), sophomore defensive back Richie Grant (#27) (tied for the second-most interceptions in the FBS and No. 29 in solo tackles).

Kentucky is 8-9 in bowl play. It narrowly lost to (20) Northwestern 24-23 in last year’s Music City Bowl, also its fourth-straight bowl loss. Its last win came in 2008 when it triumphed 25-19 over East Carolina in the Liberty Bowl.

A rematch of the 1998/99 Outback Bowl, Kentucky and Penn State have met five times previously. Other than the bowl game, the two met in consecutive regular-season games from 1975-78. The Nittany Lions lead 3-2.

These teams have similar DNA – both have top-ranked defenses (Kentucky is ranked No. 8 in scoring in the FBS while Penn State is No. 20) that have been more successful stopping the pass than the run. Offensively, both have been better at running the ball than throwing it, true even though the Nittany Lions have been far more effective scoring points. It makes for a pair of mismatches – two good defenses that have struggled vs. the run taking on offenses that are run-centric.

Penn State: junior running back Miles Sanders (#24) (No. 22 in the FBS in rushing yards per game), sophomore defensive end Yetur Gross-Matos (#99) (No. 8 in the FBS in tackles for a loss).

This is the 12th meeting between Washington and Ohio State who’ve clashed in every decade since 1950 except for the 1970s. The Buckeyes lead 8-3 and have won the last three. This is the first-ever postseason meeting.

On one side of the ball this pairing is epic – Ohio State’s potent offense (No. 8 in the nation in scoring) taking on Washington’s elite D (No. 5 in the nation in points allowed). The key matchup is the Buckeyes’ aerial attack – ranked No. 2 in the FBS – taking on a Huskie secondary ranked No. 21. On the flip side, it’s a battle of the two teams’ biggest weaknesses – Washington’s ineffective offense (ranked No. 84 in scoring) taking on Ohio State’s generous defense (ranked No. 53).

Washington: senior linebacker Ben Burr-Kirven (#25) (No. 1 in the FBS in total tackles), sophomore defensive back Byron Murphy (#1) (tied for the fourth-most interceptions in the FBS and No. 10 in passes defended), senior tailback Myles Gaskin (#9) (No. 18 in the FBS in rushing yards per game).

Ohio State: sophomore quarterback Dwayne Haskins (#7) (No. 2 in the FBS in passing yards per game, No. 1 in touchdown passes and No. 4 in passer rating), senior wide receivers Parris Campbell (#21) and Terry McLaurin (#83) (both tied for the fifth-most touchdown receptions in the FBS).

Georgia is 31-20-3 in bowl action. After beating (2) Oklahoma 54-48 in double overtime in last season’s CFB Playoff Semi-Final Rose Bowl, it fell 26-23 in overtime to (4) Alabama in the CFP Championship game.

Statistically speaking Georgia is the better of these two teams. Defensively, the Bulldogs are No. 16 nationally in points allowed vs. the Longhorns’ No. 56 rank. On offense the numbers are very much the same, Georgia at No. 13 in scoring and Texas at No. 48. And where the Longhorns have been more successful throwing the ball (No. 33 in passing yards per game vs. No. 94 in rushing), the Bulldogs have been more successful stopping the pass (No. 15 in pass D vs. No. 28 vs. the run). This game will likely come down to Texas’ defense bending without breaking enough times to win. Though Georgia is run-centric (No. 12 in rushing yards per game vs. No. 69 in passing) it may be its passing attack that is the X-factor vs. the Longhorn’s No. 115 ranked pass defense.

Georgia: sophomore quarterback Jake Fromm (#11) (No. 3 in the FBS in passer rating and No. 14 in touchdown passes), senior outside linebacker D’Andre Walker (#15) (tied for the second-most forced fumbles in the FBS) – expected to play despite suffering from a groin injury.