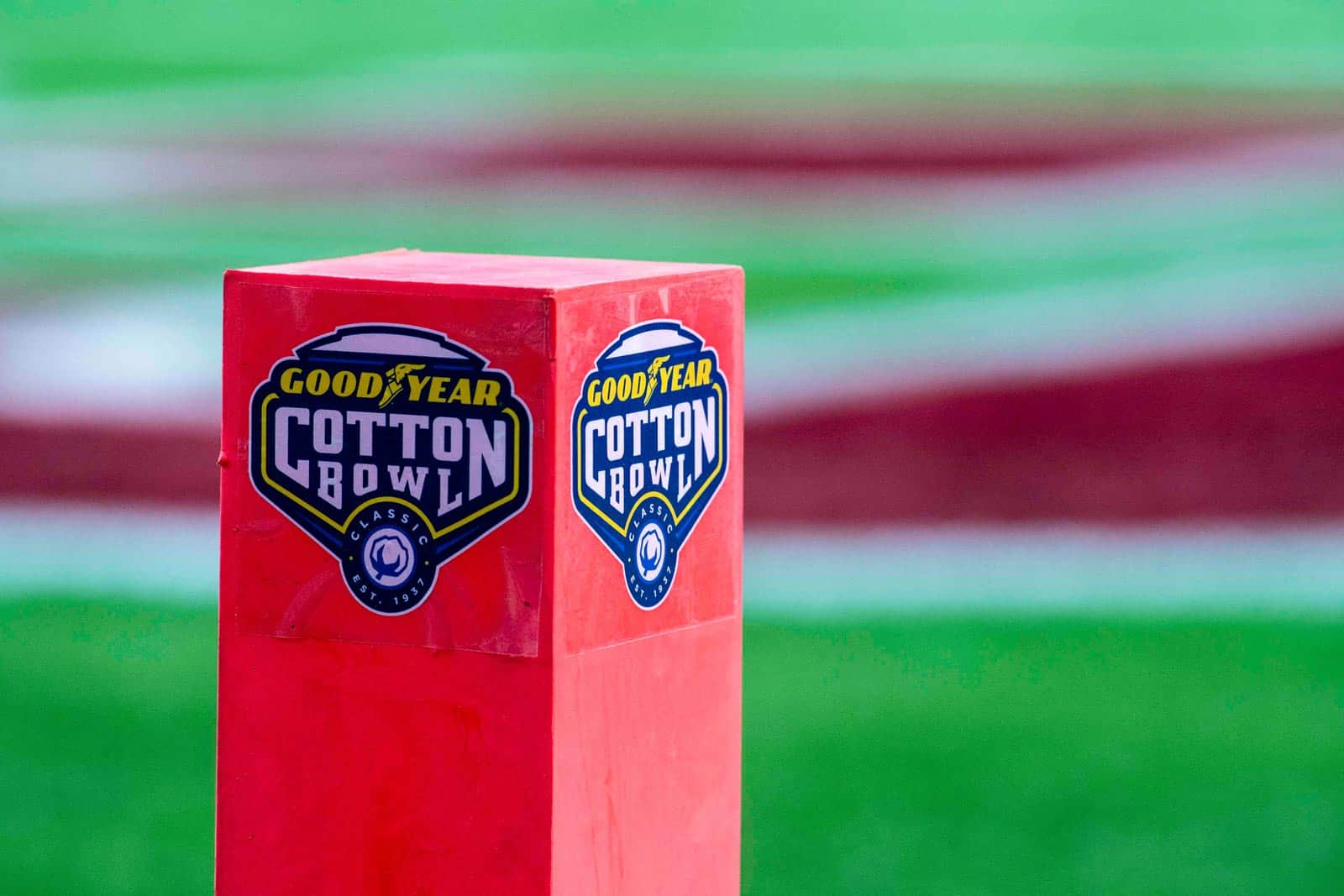 The fourth segment of this year’s bowl bonanza is bursting with goodness – including the two games which will decide the pairing for the fifth-ever CFB Playoff Championship.

Saturday features three “regular” bowl games (two at Noon EST and one at 1:15pm EST) – including one ranked vs. ranked matchup – before the CFB Playoff Semi-Final games kickoff at 4pm EST (the Cotton Bowl Classic) and 8pm EST (the Orange Bowl). Both air on ESPN.

Sunday is a day off for college ball, giving way to the finale of the NFL regular season.

From a viewing standpoint, this is the only set of games that will require mastery of your remote control. Of the eleven total contests, six are on ESPN, one is on ABC, one on CBS, one on CBSSN, one on FOX and one on FS1.

South Carolina and Virginia shared membership in the ACC from 1953-70, when the Gamecocks went independent before joining the SEC in 1992. The two haven’t clashed since 2003, South Carolina leads 21-13-1 but the two have split the last four. This is the first-ever postseason meeting.

The compelling strength vs. strength matchup in this one is South Carolina’s offense (ranked No. 38 in scoring) taking on a Virginia defense ranked No. 29 in points allowed. More specifically, it’s the Gamecocks’ No. 24 passing attack (ranked No. 3 in the SEC) taking on a Cavalier secondary ranked No. 14 vs. the pass (No. 2 in the ACC). If you’re wondering how potent South Carolina’s aerial attack is – the Gamecocks may have lost 56-35 to (2) Clemson in the final game of the regular-season, but they hung up a season-high 510-passing yards and five touchdowns on the Tigers in the loss. South Carolina will be playing without senior wide receiver Deebo Samuel – tied for the fifth-most touchdown receptions in the FBS – who’s opted to skip the bowl to prepare for the NFL Draft.

South Carolina: junior quarterback Jake Bentley (#19) (No. 16 in the FBS in passing yards per game).

Virginia: senior strong safety Juan Thornhill (#21) (tied for the third-most interceptions in the FBS), junior cornerback Bryce Hall (#34) (No. 1 in the FBS in both passes defended and passes broken-up).

Michigan is 21-25 in bowl action. It fell 26-19 to South Carolina in last season’s Outback Bowl, also its second-consecutive bowl loss.

On paper Michigan is far and away the better of these two teams, achieving top rankings in every major offensive and defensive statistical category minus pass offense. The common thread in the Wolverines’ two losses in 2018 were an inability to run the ball combined with a generous secondary. Despite a No. 25 rank in rushing offense, (3) Notre Dame held Michigan to a mere 58 yards and (6) Ohio State limited it to 161, both season-lows. This puts pressure squarely on Florida’s rush defense – ranked No. 74 nationally and No. 11 in the SEC. The good news for the Gators is the Wolverines’ leading rusher (Karan Higdon – No. 16 in the FBS in rushing yards per game) – has opted to skip the bowl game to prepare for the NFL Draft.

On the other side of the ball, the Wolverines’ No. 2 ranked pass defense (that’s a national ranking) got demolished by the Buckeyes’ aerial attack (No. 2 in the FBS) to the tune of 396 yards and six scores. That’s quite an achievement vs. a defense that’s held opponents to an average of 145 yards per game and seven total touchdowns. Unfortunately, the Gators’ passing attack is the weakest part of its offense – ranked No. 77 nationally vs. a No. 26 rank in rushing.

Arkansas State and Nevada have met five times previously, all played in the regular season between 1985 and 1999. The Wolf Pack lead 3-2.

Not only are both these teams represented by a wolf, both have potent passing attacks. The Arkansas State Red Wolves are ranked No. 23 nationally in passing offense while the Nevada Wolf Pack is No. 20.  What they don’t share is the same level of defensive success vs. the pass, ASU is No. 12 – in the nation – against the pass while Nevada is No. 86. To put that into perspective, the Red Wolves’ secondary is ranked one step above Alabama’s, which is currently at No. 13.

Arkansas State: senior quarterback Justice Hansen (#15) (No. 14 in the FBS in touchdown passes), senior defensive end Ronheen Bingham (#8) (No. 10 in the FBS in tackles for a loss).

Nevada: senior quarterback Ty Gangi (#6) (No. 13 in the FBS in passing yards per game).

This is Notre Dame and Clemson’s fourth-ever meeting and the first in the postseason. The two clashed in the 2015 regular season and then played a home-and-home series in 1977 and 1979. The Tigers lead 2-1, the Irish’s sole win coming in the very first meeting at Clemson.

Notre Dame: junior safety Jalen Elliott (#21) (tied for the fourth-most interceptions in the FBS), junior cornerback Julian Love (#27) (No. 8 in the FBS in passes broken-up and No. 14 in passes defended).

Clemson: sophomore running back Travis Etienne (#9) (No. 3 in the FBS in rushing touchdowns, No. 7 in yards per carry and No. 10 in rushing yards per game), junior defensive end Clelin Ferrell (#99) (No. 8 in the FBS in sacks and No. 18 in tackles for a loss).

Alabama is 40-25-3 in bowl play. After upending (1) Clemson 24-6 in last season’s CFB Playoff Semi-Final Sugar Bowl, it edged (3) Georgia 26-23 in overtime in the national championship game. The Tide are 5-2 in CFB Playoff action. It is the only program to have participated in each of the five brackets thus far.

Alabama: sophomore quarterback Tua Tagovailoa (#13) (No. 2 in the FBS in passer rating) – expected to play after undergoing ankle surgery on Dec. 1, sophomore wide receiver Jerry Jeudy (#4) (tied for the fifth-most touchdown receptions in the FBS), sophomore defensive lineman Quinnen Williams (#92) (No. 14 in the FBS in tackles for a loss).

The big mismatch in this one is Cincinnati’s No. 16 nationally ranked rushing attack taking on Virginia Tech’s No. 105 ranked rush defense. After holding its first five opponents to an average of 100 yards rushing per game, the Hokies coughed up, on average, 282 to its last seven foes. Keep in mind that the Bearcats have quietly put together one of the best defenses in the FBS this season – ranked No. 7 in scoring, No. 8 vs. the run and No. 26 vs. the pass.

Cincinnati: sophomore running back Michael Warren II (#3) (No. 5 in the FBS in rushing touchdowns), senior defensive tackle Cortez Broughton (#96) (No. 22 in the FBS in tackles for a loss).

Virginia Tech: junior quarterback Ryan Willis (#5) (No. 3 in the ACC in passing yards per game).

Though not mismatches or great battles of strength, this game will likely come down to which defense can do a better job of containing the opposing team’s offensive forte. Stanford is ranked an un-Stanford-like No. 19 nationally in passing offense (compare that to its No. 123 rank in rushing), putting the pressure on Pitt’s middle-of-the-road (No. 54 in the FBS) pass D. On the flip side, it’s Pitt’s No. 18 ranked rushing attack (vs. a No. 120 ranked pass offense) taking on a Cardinal defense ranked No. 40 vs. the run.

Stanford: junior quarterback K.J. Costello (#3) (No. 11 in the FBS in passing yards per game), senior wide receiver JJ Arcega-Whiteside (#19) (tied for the third-most touchdown receptions in the FBS), sophomore cornerback Paulson Adebo (#11) (No. 1 in the FBS in passes defended).

Pitt: senior running back Qadree Ollison (#30) (No. 3 in the ACC in rushing yards per game).

This is Michigan State and Oregon’s seventh-ever meeting. They last met in a home-and-home series in 2014 and 2015, each winning on their own turf. The series is deadlocked at three games apiece. This is the first-ever postseason meeting.

The pair of mismatches in this game should result in an exciting explosion of yards and points. On one side of the ball it’s Mizzou’s No. 27 ranked passing attack (ranked No. 18 nationally in scoring) taking on an Oklahoma State defense ranked No. 107 vs. the pass. On the other, it’s the Cowboys’ No. 12 ranked passing game squaring off with a Tiger defense ranked No. 104 against the pass. It’s as if each team peered into the mirror and instead seeing themselves looking back at them, they see their opponent from the 2018 Liberty Bowl.

Missouri: senior quarterback Drew Lock (#3) (No. 22 in the FBS in passing yards per game).

Northwestern and Utah have only clashed twice previously, both regular-season games in Evanston, Illinois – in 1981 (a win for the Utes) and 1927 (a win for the Wildcats).

Northwestern has struggled epically to find the end zone in 2018, ranked No. 107 in the FBS in scoring. It won’t get any easier for the Wildcats vs. Utah’s D, one of the elite units in the nation. The Utes are No. 16 in scoring and a lofty No. 5 vs. the run, putting them just two slots behind (2) Clemson at No. 3. On the other side of the ball, Utah’s offense is a middle-of-the road unit. The biggest opportunity for it to make the difference is through the air, where it will square off a Northwestern defense that is No. 106 against the pass (vs. No. 32 against the run).

Northwestern: sophomore linebacker Blake Gallagher (#51) (No. 20 in the FBS in total tackles).

Utah: senior linebacker Chase Hansen (#22) (No. 5 in the FBS in tackles for a loss) – listed as a game-time decision due to an undisclosed injury, sophomore defensive back Jaylon Johnson (#1) (tied for the fourth-most interceptions in the FBS).

This is the first-ever football meeting between NC State and Texas A&M. The Aggies are 13-18 vs. the current membership of the ACC while the Wolfpack are 38-57-6 against the SEC (the bulk of which is a 26-28-4 mark vs. South Carolina).

Both of these teams have struggled to shut down opponents’ passing attacks in 2018. NC State is ranked No. 120 nationally vs. the pass (No. 13 in the ACC) and Texas A&M comes in at No. 109 (No. 14, or dead last in the SEC). Though the Aggies’ passing offense is good (No. 33 nationally and No. 5 in the SEC) it isn’t elite. The Wolfpack’s is. NC State is ranked No. 6 in the FBS in passing yards per game, just behind West Virginia at No. 3, Texas Tech at No. 4 and Ole Miss at No. 5. This puts the pressure squarely on A&M’s secondary. The good news for the Aggies is that Kelvin Harmon – NC State’s leading receiver – has decided to opt out of the bowl game to prepare for the NFL Draft.

Texas A&M: junior running back Trayveon Williams (#5) (No. 4 in the FBS in rushing yards per game).

Hasn’t Oklahoma beaten Alabama three straight times and not the other way around?

I don’t have a dog in the fight but the CFP committee failed again. Notre Dame was/is a fraud and everyone knew it but these guys rewarded them for playing a weak schedule and barely beating some not so good teams. No way Clemson dominates Georgia or even Ohio St. the way they did ND.

Actually I would say may be we should go from 4 teams to 2 teams for the championship & just give the trophy to either Clemson or Bama every year. No teams out there this year that can beat them.