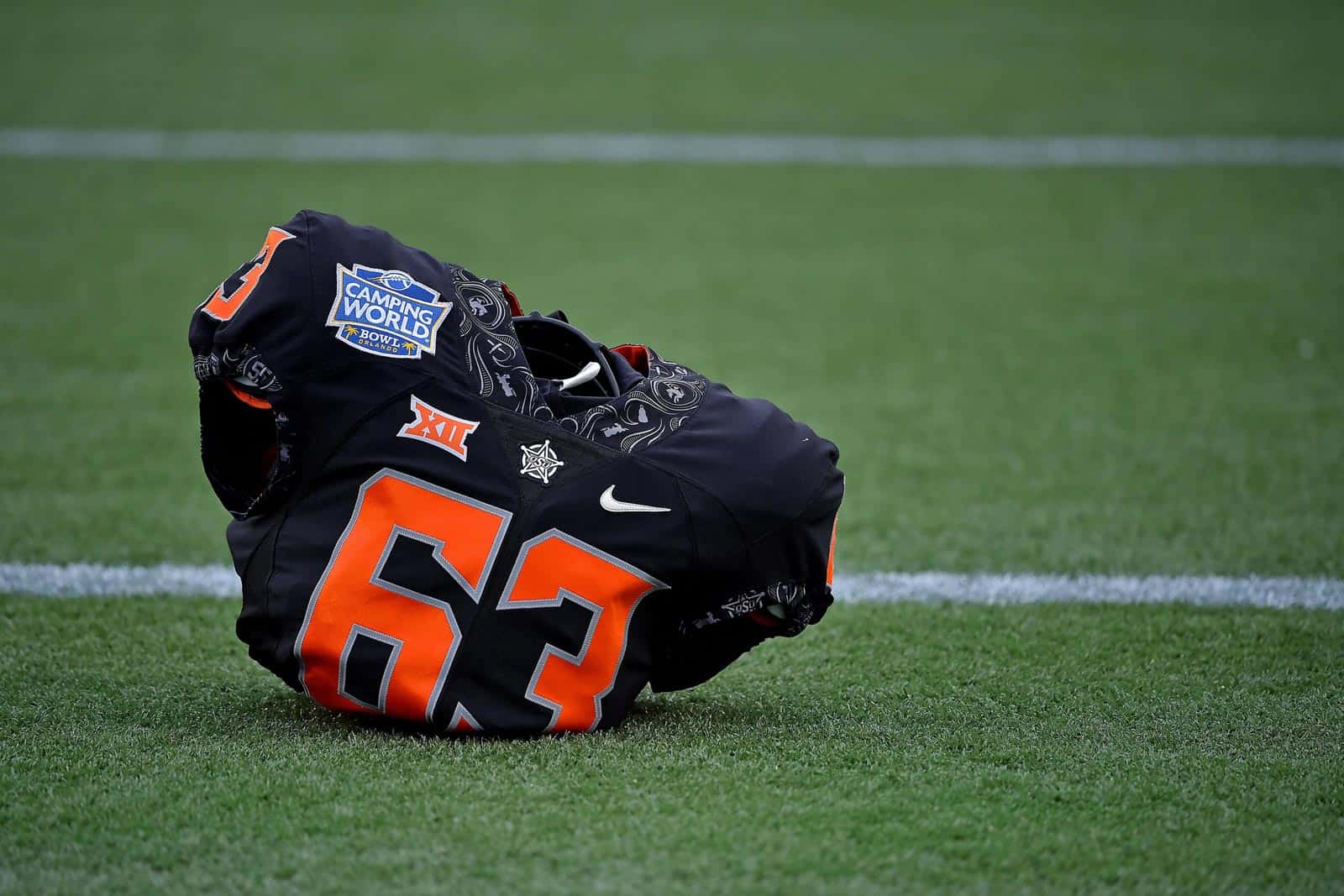 On tap for part one of your holiday hangover are nine bowl games – spread evenly from Wednesday until Friday.

As far as when and where to tune it, the good folks over at ESPN have made it super simple – three games each day, all at the same three times (1:30pm, 5:15pm and 9pm EST), all on ESPN.

Among the highlights are the first the first two bowl games featuring ranked vs. ranked matchups, occurring back-to-back on Wednesday. (16) West Virginia takes on (20) Syracuse in the Camping World Bowl at 5:15pm EST and then (24) Iowa State squares off with (13) Washington State at 9pm EST.

Of the nine contests, five feature matchups we’ve never seen before (the Quick Lane, Cheez-It, Independence, Music City and Alamo Bowls) while one features a pairing we haven’t seen since the end of the Korean War (the Texas Bowl).

After the dust settles, we’ll have only 17 college football games remaining to watch for the 2018 season. Therefore, friends, now is not the time to tune out.

The Eagles and Broncos have only met once previously, the 2005 MPC Computers Bowl, a 27-21 win for Boston College.

The key mismatch in this game is Boise State’s high-flying passing attack – ranked No. 17 in nation – taking on a BC defense ranked No. 97 vs. the pass. The common thread in two of the Broncos’ three losses this season was being held to fewer than 200 yards passing – a low-mark they hit vs. San Diego State (178) and Fresno State (125) in the MWC title game. The Eagles D, on the other hand, gave up an average of 198 air yards in its seven wins vs. 316 average in its five losses. Whomever wins this matchup will likely be the First Responder to the trophy.

Boston College: sophomore running back AJ Dillon (#2) (No. 12 in the FBS in rushing yards per game). Reported as questionable after suffering an injury vs. Syracuse.

Boise State: junior running back Alexander Mattison (#22) (No. 5 in the FBS in rushing touchdowns), senior quarterback Brett Rypien (#4) (No. 12 in the FBS in passing yards per game), sophomore STUD Curtis Weaver (#99) (No. 14 in the FBS in sacks).

Most appearances: Boston College, Duke, Minnesota and Rutgers (all 1-0) and Central Michigan, Maryland, North Carolina and Northern Illinois (all 0-1)

Minnesota is 7-12 in bowl action. It last went bowling in 2016, defeating Washington State 17-12 in the Holiday Bowl.

This is the Golden Gophers and Yellow Jackets first-ever football meeting. Minnesota is 14-7 vs. the current membership of the ACC while Georgia Tech is 23-13 vs. the Big Ten.

Minnesota has struggled on both sides of the ball in 2018 (ranked No. 69 in scoring offense and No. 75 in scoring defense). To have a shot at getting over .500, it’ll have to contend with Georgia Tech’s triple-option attack, ranked No. 1 in the nation in rushing yards and No. 126 in passing. The Gophers are currently No. 76 nationally and No. 9 in the Big Ten vs. the run. They’ve allowed, on average, 183.1 ground yards per game this season. While not a travesty, the bigger picture is while they held six of their opponents to fewer than 100 rushing yards, they allowed another three 315-plus. Though the trio all ranks among the 30 best rushing teams in the nation (Illinois at No. 13, Maryland at No. 17 and Nebraska at No. 27) none have been as successful on the ground as Georgia Tech.

This is Georgia Tech head coach Paul Johnson’s final game at the helm.

Minnesota: freshman running back Mohamed Ibrahim (#24) (No. 19 in the FBS in rushing yards per game), junior wide receiver Tyler Johnson (#6) (tied for the seventh-most receiving touchdowns in the FBS).

Georgia Tech: senior quarterback TaQuon Marshall (#16) (tied for the fifth-most rushing touchdowns by a QB in the FBS).

Though both schools traditionally have high-flying attacks, in 2018 Cal and TCU have both struggled to score points (the Golden Bears are ranked No. 108 in scoring while the Horned Frogs are No. 97). Of the two defenses, Cal has been slightly more successful in shutting opponents down (No. 24 in defensive scoring, No. 31 vs. the run and No. 25 vs. the pass) than has TCU (No. 44 in scoring, No. 41 vs. the run and No. 40 in the pass). This narrow statistical gap can at least be partially explained by the Horned Frogs’ membership in the point-happy Big 12. This one should be low-scoring and close.

Temple has done a good job finding the end zone this season – it’s No. 22 nationally in scoring, averaging 35.6 points per game. Though it has been more successful through the air (No. 40 nationally) than on the ground (No. 67), it’s the running game that has an opportunity to shine vs. Duke. The Blue Devils are an awful No. 117 vs. the run which means only 13 programs in the FBS have been more generous. It’s an issue that’s gotten worse as the season has progressed – Duke gave up an average of 145.8 yards and nine total rushing touchdowns in its first seven outings (posting a 5-2 record) only to cough up 329.4 yards on average and 16 total scores in its last five (resulting in a 2-3 mark).

Temple’s head coach – Geoff Collins – was hired away by Georgia Tech. Though Florida DC Manny Diaz was named the Owls’ new head man, they will be coached by interim Ed Foley in the bowl game.

Temple: senior running back Ryquell Armstead (#7) (No. 13 in the FBS in rushing yards per game).

Duke: junior quarterback Daniel Jones (#17) (No. 4 in the ACC in passing yards per game and tied for No. 2 in touchdown passes).

Wisconsin is 15-14 in bowl play. It’s won its last four-straight bowl appearances, last falling to then (8) South Carolina in the 2013/14 Capital One Bowl.

A rematch of last season’s Orange Bowl – when (6) Wisconsin beat (11) Miami – these two also clashed in the 2009 Champs Sports Bowl (also a win for the Badgers). The other three meetings occurred in the regular season between 1958 and 1989. Wisconsin leads 3-2.

Both the Hurricanes (at No. 8) and the Badgers (at No. 4) were ranked in the AP’s preseason Top 10. For each, a bowl win, even over an unranked opponent, means crucial momentum going in to 2019, especially given the level of results vs. expectations. The key matchup is Wisconsin’s rushing attack – ranked No. 7 nationally – taking on a Miami D ranked a lofty No. 24 vs. the run. The Hurricanes will be without senior defensive tackle Gerald Willis III (No. 14 in the FBS in tackles for a loss) who is out with a hand injury.

Wisconsin: sophomore running back Jonathan Taylor (#23) (No. 1 in the FBS in rushing yards per game).

This one will likely come down to how well the Commodores’ defense can contain Baylor’s passing attack – ranked No. 22 in the nation. Vanderbilt is currently ranked No. 71 nationally and No. 10 in the SEC vs. the pass. The only opponents it’s faced with a higher-ranked passing attack than the Bears are Nevada (No. 20), which it held to 216 air yards in a 41-10 win and Ole Miss (No. 5), which it gave up a season-high 457 passing yards to in a 36-29 loss. The other key factor are turnovers, a category Baylor has been super-inconsistent in this season. The Bears are plus-two in turnover margin in their six wins vs. minus-ten in their six losses. Baylor will be without their top receiver, senior Jalen Hurd, who is out after knee surgery.

Vanderbilt: junior running back Ke’Shawn Vaughn (#5) (No. 24 in the FBS in yards per carry) – listed as questionable due to an arm injury, junior cornerback Joejuan Williams (#8) (tied for the fourth-most interceptions in the FBS).

This is the first-ever football meeting between Purdue and Auburn. The Boilermakers are 12-8 vs. the current membership of the SEC while the Tigers are 11-8-2 against the Big Ten.

The highest-ranked single unit coming into this game is Purdue’s passing attack, ranked No. 10 in the nation. That’s two slots better than Oklahoma State at No. 12 and two slots below Oklahoma at No. 8. Though Auburn is ranked No. 18 in scoring defense (No. 5 in the SEC), it’s been slightly more successful defending the run (No. 39) than the pass (No. 58). It’s also lost ground as the season has progressed – holding opponents to an average of 188 passing yards in its first six games only to give up 256 in its final six. The only other top-ranked aerial attacks the Tigers have faced in 2018 are Ole Miss (No. 5), allowing 324 yards in a 31-16 win, and Alabama (No. 7), giving up a season-high 377 in a 52-21 loss. The other fascinating element is how each team will feel coming into this game – Purdue was expected to finish at the bottom of the Big Ten West (so this game is a reward) while Auburn was ranked No. 9 in the preseason AP (making this game seem like a huge disappointment).

Auburn: senior linebacker Deshaun Davis (No. 5 in the SEC in total tackles and No. 6 in tackles for a loss).

A rematch of the 2012 Pinstripe Bowl, West Virginia and Syracuse shared membership in the Big East from 1991 until 2011. The Orange lead 33-27 and have won three-straight.

Both the Mountaineers and Orange have managed to score plenty of points this season (WVU is ranked No. 9 in scoring offense while Syracuse is No. 12). The difference is, the Orange have achieved a better balance, ranked No. 31 in rushing and No. 36 in passing vs. the Mountaineers’ No. 75 rank in rushing and No. 3 rank in passing. Defensively, both have done better against the run (WVU at No. 48 and Syracuse at No. 65) than vs. the pass (WVU at No. 101 and Syracuse at No. 111). This gives an advantage (despite the fact that senior quarterback Will Grier will skip the game to prep for the NFL Draft) to the pass-happy Mountaineers.

Washington State should look eerily familiar to Iowa State. The Cougars are ranked a scary No. 1 in passing offense and a lowly No. 129 in rushing offense, making them look like a Big 12 program. The Cyclones D has held up well against a barrage of prolific aerial attacks this season, earning a No. 67 rank in pass defense despite facing the current No. 3, No. 4, No. 8 and No. 12 ranked passing offenses. The difference is, Washington State has a solid defense, which is something you can’t say about most of the Big 12. The Cougars are No. 39 in scoring, No. 37 vs. the run and No. 48 vs. the pass. So, they ought to be able to stave off Iowa State’s No. 81 ranked scoring offense.

Iowa State: junior wide receiver Hakeem Butler (#18) (No. 1 in the FBS in yards per reception and No. 15 in receiving yards per game).

Washington State: senior quarterback Gardner Minshew II (#16) (No. 1 in the FBS in passing yards per game and No. 3 in completion percentage).

Sorry Amy. You have Minnesota last bowling with a 17-12 lost to Washington State in the 2016 Holiday Bowl when in fact Minnesota won that bowl game by the 17-12 score. Happy Holidays.

It’s been corrected, thanks.

Beating up on the ACC in the non conference isn’t very hard.

Welcome to the party!

Your champion is Ohio State. They lost by 29 to Purdue.

I’m not sure you have a realistic impression of what “hard” is.

…And Georgia got drubbed by LSU, whose ranking was inflated by beating Miami, who mid-tier B10 Wisconsin also manhandled. Funny Wisconsin doesn’t get the same inflated ranking.

Congrats to Auburn for crushing a Purdue team playing with half their starting defense. Think you probably ought to reserve the trash talk until after all 4 SEC/B10 matchups. Really eager to see PSU against that Kentucky team that was ranked above them most of the year. Michigan probably beats Florida despite playing half their starters.

Georgia also drubbed several ranked teams and nearly defeated the No. 1 team in the country, something no other team has come close to.

I will only be pulling for Michigan over Florida due to living in a Wolverine household but hope the rest of the SEC wins their games.
As for Purdue, I don’t think even it they had all their starters in that it would’ve made a difference, Auburn manhandled them from the start of the game & Boilermakers could only score 14 pts on Auburn defense, that was a lopsided game as a whole.