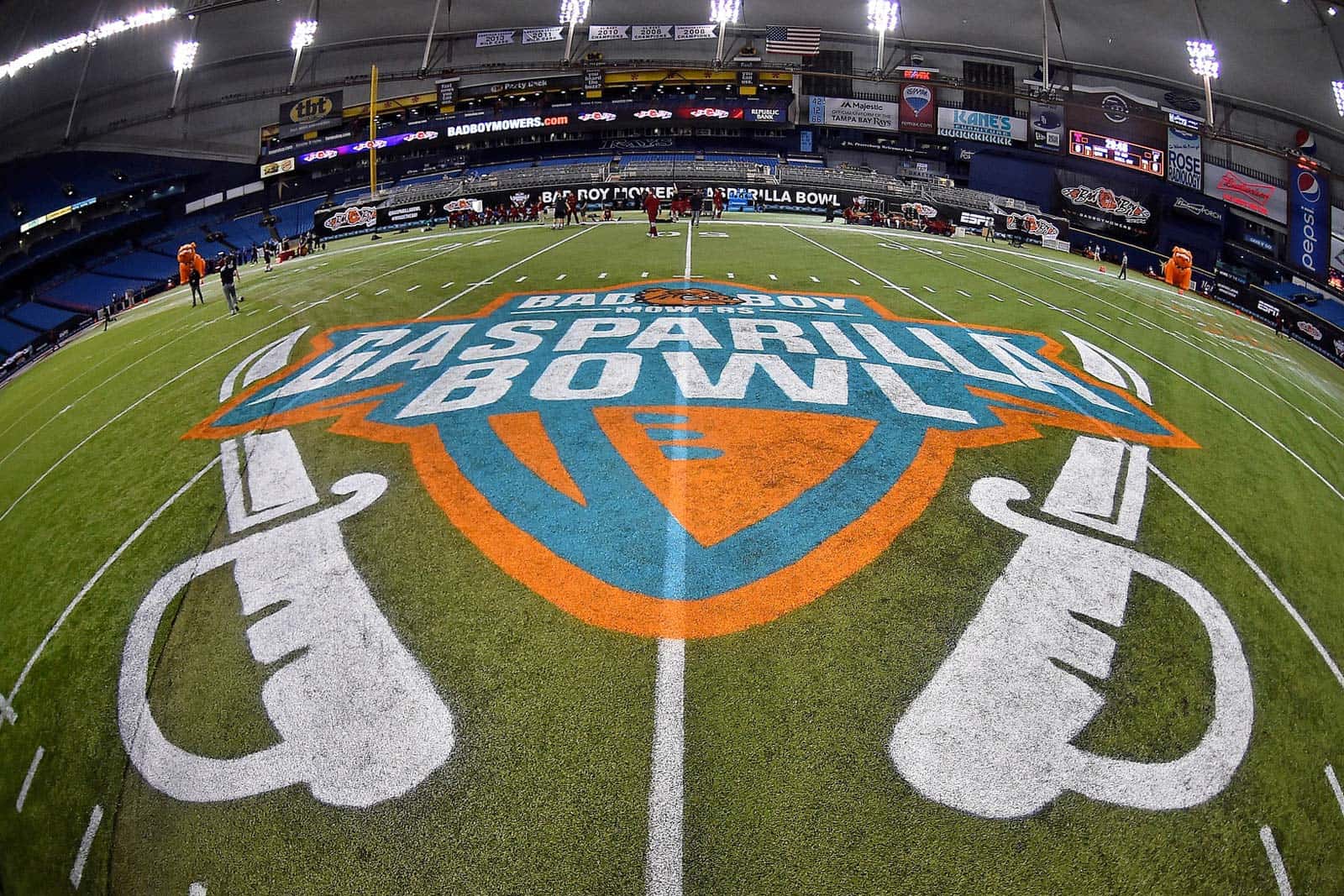 Of all the stuff you have to do this week, you get to watch nine college football games.

The second stanza of bowl season kicks off on Tuesday night and doesn’t end until late on Saturday. As far as which network to tune in to, all nine games air on ESPN, so set your channel once and you’re done.

Tuesday night the Boca Raton Bowl has a 7pm EST start time. Wednesday and Thursday nights – the Frisco and Gasparilla Bowls – both go at 8pm EST. The week wraps up with two Friday afternoon starts – the Bahamas Bowl at 12:30pm EST and then the Potato Bowl at 4pm EST.

That leaves Saturday’s offerings: the Birmingham Bowl at Noon EST, the Armed Forces Bowl at 3:30pm EST, the Dollar General Bowl at 7pm EST, and finally the Hawaii Bowl at 10:30pm EST.

Though there aren’t a lot of obvious headliners in this set – don’t be fooled, there are some fascinating storylines to get caught up in.

As far as the best under-the-radar, on-field pairing – check out the Frisco Bowl, featuring one of the best strength vs. strength matchups this bowl season. Though it may not come across as sexy at first sight, you’ll likely go to bed happy.

Most Appearances: FAU, Marshall, Toledo and WKU (all 1-0) and Akron, Memphis, Northern Illinois and Temple (all 0-1)

UAB has never won a bowl game. It got blown out 41-6 by Ohio in last year’s Bahamas Bowl. Its only other bowl appearance in program history was a 59-40 loss to Hawaii in the 2004 Hawaii Bowl.

Northern Illinois is 4-8 in bowl play. It lost 36-14 to Duke in last season’s Quick Lane Bowl, also it’s fifth-straight bowl loss. The most recent win came in the 2011 GoDaddy.com Bowl, a 38-20 win over Arkansas State.

UAB and Northern Illinois have never met in football. The Blazers have never beaten a current MAC member, losing one game apiece, both in 2017, to Ohio and Ball State. The Huskies are 7-15 vs. the current Conference USA.

Both teams have excellent defenses (the Blazers are No. 9 nationally in scoring while the Huskies are No. 26) and are paired with offenses that have struggled to score points. Overall, UAB has been more successful finding the end zone than has NIU. The key matchup is the Blazers’ rushing attack – ranked No. 28 nationally – taking on a Huskie D ranked No. 14 vs. the run. The ground game has been essential to UAB’s success this season, to illustrate it rushed for minus-one yards in its 27-3 loss to Middle Tennessee in the final game of the regular season and then turned around, a week later, and hung up 225 rushing yards on the same Blue Raider team to win the C-USA title 27-25.

UAB: sophomore running back Spencer Brown (#28) (No. 7 in the FBS in rushing touchdowns), senior defensive lineman Jamell Garcia-Williams (#99) (No. 14 in the FBS in sacks).

Northern Illinois: junior defensive end Sutton Smith (#15) (No. 1 in the FBS in sacks and No. 2 in tackles for a loss).

This is the first-ever football meeting between San Diego State and Ohio. The Aztecs are 13-0-1 all-time vs. the current MAC – the sole non-win coming in a 21-21 draw with Bowling Green in 1974. The Bobcats are 2-5 vs. the Mountain West, most recently edging Utah State 24-23 in the 2011 Idaho Potato Bowl.

This game features one of the best strength vs. strength matchups this bowl season. While you’d expect San Diego State to have an elite ground game, in a twist, it’s Ohio’s No. 8 nationally ranked rushing offense taking on an Aztec D ranked No. 4 vs. the run. Where the Bobcats are averaging 261.9 rushing yards a game (just shy of Wisconsin’s 268.4), SDSU is holding opponents to a mere 94.5 yards ground yards per game (just shy of Clemson’s 92.9). The Aztecs are one of only four teams in the nation allowing fewer than 100-yards per game. The others? Michigan State (No. 1 in rushing D), Texas A&M (No. 2) and, again Clemson (No. 3). Mighty Alabama is No. 19, giving up 117 yards per game.

South Florida is 6-3 in bowl play. It edged Texas Tech 38-34 in last season’s Birmingham Bowl, its second-straight bowl victory, both over Power 5 members (the Bulls beat South Carolina in overtime in the 2016 Birmingham Bowl).

Marshall and South Florida have never met in football. The Thundering Herd is 29-37-1 all-time vs. the current AAC while the Bulls are 14-9 against the C-USA.

South Florida kicked off 2018 with seven-straight wins, climbing all the way to No. 21 in the AP, only to lose its last five games. What killed the Bulls was the inability to score points at the same pace, racking up an average of 35.6 points through the first seven and freefalling to 20.2 points in the last five. It makes Marshall – the owner and operator of the No. 32 scoring defense in the country – a tough opponent. The Herd hold a higher rank in scoring defense than three of the Bulls’ last five opponents, the exceptions being Cincinnati (No. 7) and UCF (No. 24). Marshall’s biggest defensive weakness is against the pass where its No. 68 nationally (vs. No. 10 against the run). This puts the pressure squarely on USF’s aerial attack – ranked No. 56 nationally – to make the difference.

This is the third-ever meeting between FIU and Toledo. Other than the 2010 Little Caesars Bowl, the two also played a home-and-home in 2008 and 2009. The Panthers lead 2-1.

The biggest mismatch in this one is Toledo’s No. 23 ranked rushing attack taking on an FIU D that’s ranked No. 100 vs. the run. It amounts to the second-best ground game from the MAC clashing with the second-worst rush D in Conference USA. The best opportunity for the Panthers to balance the scales is to fire up its passing attack (No. 51 in the FBS, No. 5 in the C-USA) and take advantage of the Rockets’ struggling secondary (No. 105 nationally and No. 11 in the MAC).

Toledo: freshman running back Bryant Koback (#22) (tied for the eighth-most rushing touchdowns in the FBS).

Western Michigan has a solid offense (ranked No. 36 nationally in points per game) and a questionable defense (ranked No. 102 in scoring D). In a case of opposites, BYU has an offense that has struggled to score points (No. 95 in points per game) and a stingy defense (No. 28 in scoring). It makes this matchup a classic battle of strength vs. strength – the Broncos’ offense vs. the Cougars D – AND a clash of weaknesses – BYU’s O vs. WMU’s defense.

Western Michigan: junior running back LeVante Bellamy (#2) (No. 1 in the MAC in rushing yards per game).

Memphis and Wake Forest haven’t met in 51-years. The two have played four times total, all between 1964-67. All but one (in 1966), were played in in Memphis. The series is deadlocked at two wins apiece.

On paper this one looks like an epic mismatch. On one side of the ball it’s a Memphis offense that has soared to a No. 7 national ranking in scoring and a No. 4 mark in rushing yards per game. On the flip side, it’s a Wake Forest D ranked No. 102 in scoring and No. 92 vs. the run. The rest of the story has two key components – first, the Tigers’ leading rusher – junior Darrell Henderson (No. 2 in the FBS in yards per game) – has opted to skip the bowl game to prepare for the NFL Draft. Next up, Memphis’ defense has struggled mightily – ranked No. 91 nationally, No. 73 vs. the run and No. 99 vs. the pass. It means that the Demon Deacons will have to be better than they’ve been defensively and then score like the wind on the back of their rushing attack, ranked No. 24 in the FBS and No. 4 in the ACC (vs. their passing attack, ranked No. 68 in the FBS and No. 8 in the ACC).

Army is 5-2 in bowl play. This is its second-straight appearance in the Armed Forces Bowl, downing San Diego State 42-35 in last year’s game.

Houston and Army have met seven times previously, all regular-season games played between 1998-2004. The Cougars lead 5-2 and have won three-straight.

First up, this pairing offers a fascinating strength vs. strength matchup – Houston’s potent offense (No. 4 in the FBS in scoring, No. 20 in rushing and No. 14 in passing) taking on a stingy Army D (No. 17 in scoring, No. 12 vs. the run and No. 30 vs. the pass). While that part has “epic” written all over it, the mismatch comes when you imagine the Cougars defense (ranked No. 99 nationally vs. the run) trying to contain Army’s triple-option attack (ranked No. 2 in the FBS in rushing yards per game). To complicate matters, Houston’s stellar defensive tackle – Ed Oliver – is skipping the bowl game to prep for the NFL draft.

Houston: senior linebacker Austin Robinson (#22) (No. 13 in the FBS in solo tackles).

Army: senior running back Darnell Woolfolk (#33) (No. 14 in the FBS in rushing touchdowns).

Buffalo has never won a bowl game. It last went bowling in 2013, suffering a 49-24 defeat to San Diego State in the Idaho Potato Bowl. Its only other bowl experience came in the 2008 International Bowl, a 38-20 loss to UConn.

Buffalo and Troy have never met in football. This is the first time the Bulls have ever played a current member of the Sun Belt. The Trojans are 4-3 vs. the MAC, most recently beating Akron during the 2017 regular season.

Statistically speaking, these two teams have turned in solid performances from top to bottom. The best strength vs. strength matchup is Buffalo’s No. 28 ranked scoring offense (averaging 34.8 points per game) taking on a Troy D ranked No. 23 in scoring (allowing 21.2 points per game). Overall, it looks to be one of the more evenly matched pairings in the postseason.

Troy: senior safety Cedarius Rookard (#5) (tied for the fourth-most interceptions in the FBS), senior bandit linebacker Hunter Reese (#47) (No. 2 in the Sun Belt in sacks and No. 3 in tackles for a loss).

Hawaii is 6-5 in bowl action. It last went bowling in the 2016 edition of the Hawaii Bowl, beating Middle Tennessee 52-35.

This is the 11th all-time meeting between Hawaii and Louisiana Tech. All ten previous games were played during the regular season between 2000 and 2011, all but one when both schools were members of the WAC. The Rainbow Warriors lead 8-2 and have won two-straight.

This matchup features two key components. First, in a battle of strengths its Hawaii’s prolific passing attack (No. 9 in the nation in yards per game) squaring off with Louisiana Tech’s No. 30 ranked passing defense. Next up, it’s each team’s most blaring weakness – the Bulldogs’ No. 100 ranked scoring offense trying to reach the endzone vs. a Warrior D ranked No. 111 in the FBS in scoring. And where La Tech has been especially ineffective running the ball (No. 113 nationally), Hawaii has been equally as poor at stopping the run (No. 106 in the FBS).

Louisiana Tech: senior defensive end Jaylon Ferguson (#45) (No. 1 in the FBS in sacks and tackles for a loss).

Thanks again for keeping us up to date!! I’m just not mature enough for some of these bowl names though!!