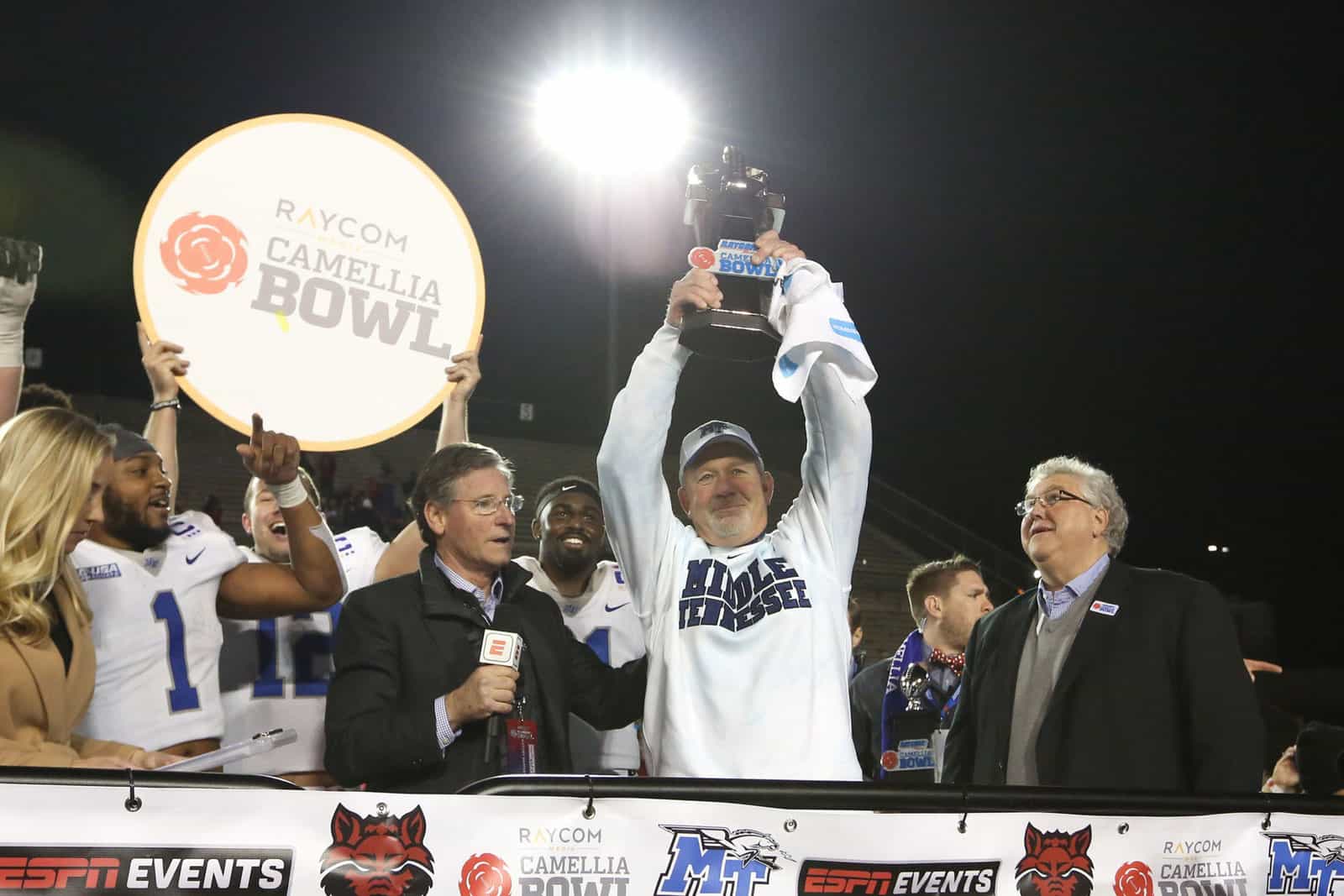 Things kick-off this Saturday at noon EST on ABC with the Air Force Reserve Celebration Bowl. Before you lose interest – yes, it’s an FCS game, but it’s also one of only four bowl games that feature a clash between two conference champions.

After that, it’s five games that stretch all the way through the afternoon and into primetime.

That leaves the late game, the New Orleans Bowl, at 9pm EST, also on ESPN.

What follows is a blow-by-blow of when to watch, what to watch for and who to watch doing it. It’s the first in a five-part series that will boldly walk beside you this bowl season, feeding you information as you also feast on holiday goodness.

This game offers an excellent strength vs. strength matchup pitting the North Carolina A&T Aggie’s stingy rushing defense – ranked No. 1 in the FCS – against an Alcorn State Braves’ rushing attack ranked No. 8 nationally. On the flip side, the Aggies’ offense hasn’t managed to be super productive in 2018 (No. 34 in scoring, No. 88 in passing and No. 40 in rushing) meaning it’s up for a stiff challenge vs. a Braves D that is No. 19 in scoring and No. 6 in total defense.

Tulane and Louisiana are located a mere 135-miles apart. Though the Green Wave hold a dominating 22-4 lead in the all-time series, the Ragin’ Cajuns have won two of the last three meetings.

This is a battle between two teams with potent rushing attacks (Tulane is No. 30 in the nation in rushing yards per game while Louisiana is No. 19) and defenses which have managed different levels of success. The Green Wave D is ranked No. 50 in the FBS vs. the run (No. 2 in the AAC) while the Ragin’ Cajuns are No. 107 overall (No. 8 in the Sun Belt). The key matchup may come down to how well Louisiana’s passing attack (No. 90 in the nation) can perform against a Tulane secondary ranked No. 115 in the nation.

Tulane: junior wide receiver Darnell Mooney (#3) (No. 5 in the FBS in yards per catch), sophomore defensive end Patrick Johnson (#34) (tied for No. 9 in the FBS in sacks).

Louisiana: junior running back Raymond Calais (#4) (No. 2 in the FBS in yards per carry).

North Texas and Utah State haven’t clashed since 2004, the back end of a home-and-home series. The Aggies lead 4-3 but the Mean Green have won the last two. This is the first-ever postseason meeting.

This matchup features two potent passing attacks (North Texas is No. 11 in the FBS in passing yards per game while Utah State is No. 18) taking on a pair of defenses that have struggled vs. the pass (the Mean Green are No. 91 in pass defense while the Aggies are No. 83). Utah State has given up 300-plus passing yards in each of its last four outings while North Texas has thrown for 294-plus in seven of its last eight appearances.

With six-year head coach Matt Wells off to Texas Tech, the Aggies will be coached by co-defensive coordinator Frank Maile, serving as the interim until Gary Andersen takes over for the 2019 season.

North Texas: senior linebacker E.J. Ejiya (#22) (No. 4 in the FBS in tackles for a loss), junior quarterback Mason Fine (#6) (No. 8 in the FBS in passing yards per game), junior wide receiver Rico Bussey, Jr. (#8) (No. 7 in the FBS in receiving touchdowns), senior defensive backs Kemon Hall (#16) and Nate Brooks (#9) (both tied for third-most interceptions in the FBS).

Utah State: sophomore quarterback Jordan Love (#10) (No. 17 in the FBS in passing yards per game), sophomore linebacker David Woodward (#9) (No. 16 in the FBS in total tackles).

Fresno State is 11-13 in bowl play. It beat Houston 33-27 in last year’s Hawaii Bowl. It hasn’t downed a current Power 5 member in bowl action since beating Georgia Tech in the 2007 Humanitarian Bowl.

Fresno State and Arizona State haven’t squared off in 77 years. The Sun Devils have won each of the three total meetings, all played in the regular season between 1931 and 1941.

Arizona State rushed for 250-plus yards in five of its seven wins this season. This seems to set up well for Fresno State’s stellar D, which is ranked No. 27 in the nation against the run. This is the same unit that is ranked No. 2 – again in the entire FBS – in scoring defense. Only two opponents have managed to hang up more than 150-rushing yards on the Bulldogs in 2018 – UNLV (197 yards in a 48-3 Fresno State win) and Boise State twice (179 on Nov. 9, a loss for the Bulldogs and 225 in the MWC title game, a Bulldog win). If you’re wondering how Fresno State’s defense held up against Power foes this year, it limited Minnesota to 132 rushing yards in a 21-14 loss and held UCLA to 119 in a 38-14 win.

Fresno State: senior quarterback Marcus McMaryion (#6) (No. 9 in the FBS in passer rating), senior wide receiver KeeSean Johnson (#3) (No. 10 in the FBS in receiving yards per game), junior linebacker Jeff Allison (#9) (No. 19 in the FBS in total tackles).

Arizona State: sophomore running back Eno Benjamin (#3) (No. 4 in the FBS in yards per game).

This is the first-ever football matchup between Georgia Southern and Eastern Michigan. The GSU Eagles are 2-1 all-time vs. current MAC members while the EMU Eagles are 4-6-1 against the Sun Belt.

The major mismatch in this one is Georgia Southern’s (which runs the option) potent rushing attack – ranked a lofty No. 9 in the FBS – taking on an Eastern Michigan D that is currently No. 93 nationally vs. the run. Where GSU has averaged 260.8 ground yards per game this season (eclipsing the 300-yard mark on five occasions), EMU has generously given up 192.92 (coughing up 227-plus in five appearances).

Georgia Southern: senior running back Wesley Fields (#21) (No. 4 in the Sun Belt in rushing yards per game), sophomore quarterback Shai Werts (#4) (No. 3 in the FBS in rushing touchdowns by a QB).

Eastern Michigan: junior defensive lineman Maxx Crosby (#92) (No. 14 in the FBS in tackles for a loss).

Middle Tennessee is 2-5 in bowl action. Last year, it beat Arkansas State 35-30 in the Camellia Bowl, also the first bowl win since 2009.

Appalachian State is a perfect 3-0 in bowl play. It moved up from the FCS to the FBS in 2014 and has been to a bowl game, and won it, in every season it’s been eligible to.

This is the third meeting between MTSU and App State. They most recently clashed in 1992, a Blue Raider win in Murfreesboro. Middle Tennessee leads the series 2-1.

Appalachian State has one of the best defenses in the nation (No. 6 in scoring and No. 3 vs. the pass) and has been successful scoring points on the ground (No. 20 in scoring offense and No. 15 in rushing yards per game). This all adds up to a tough test for Middle Tennessee, which on offense has been more successful through the air than on the ground and who has been a middle-of-the road team against the run. If the Blue Raiders have a chance in this one, they’ll have to join the elite club (which as of now has only three members) of opponents who have held App State to fewer than 200 rushing yards in 2018.

Middle Tennessee: senior quarterback Brent Stockstill (#12) (No. 4 in the FBS in completion percentage), senior defensive back Wesley Bush (#23) (tied for the second-most interceptions in the FBS).

Appalachian State: sophomore running back Darrynton Evans (#3) (No. 2 in the Sun Belt in rushing yards per game), junior defensive back Desmond Franklin (#6) (tied for the fourth-most interceptions in the FBS).

Thanks for all the info!!! This is awesome!!!