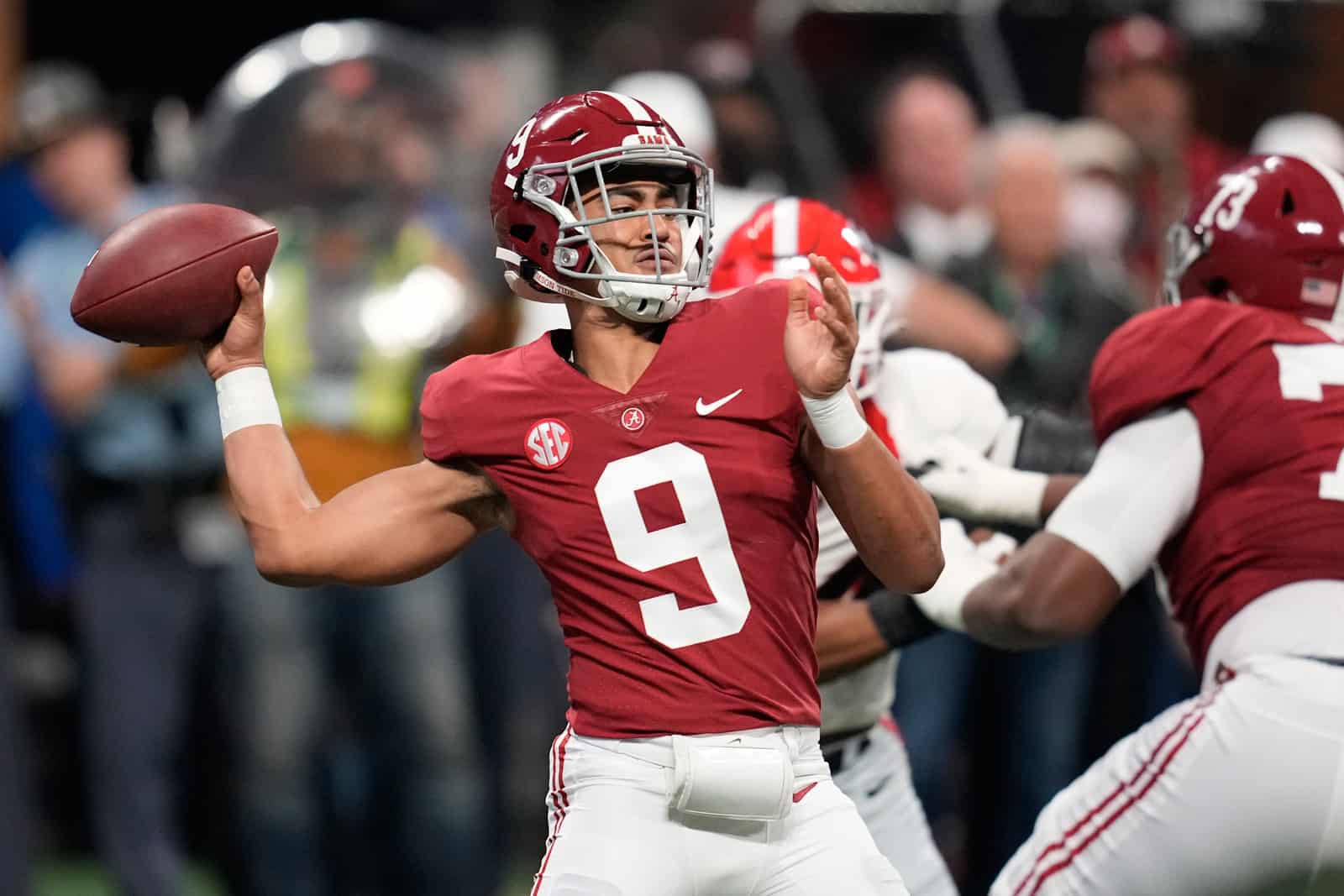 The fifth installment of our trek through the 2021 college football bowl schedule is what we’ve been waiting for.

But before we get to the double-header to end all double-headers – don’t forget that the appetizer round includes the only two games this bowl season where the originally selected teams aren’t competing. The “Replacement” bowls air at 11am EST on ESPN (the Gator) and at Noon EST on CBS (the Sun).

After that, it’s GO time on ESPN exclusively – the Cotton Bowl airs at 3:30pm EST and the Orange Bowl kicks off at 7:30pm EST.

In the words of Coach Norman Dale to his underdog Hickory Huskers before the 1954 Indiana state basketball championship game (as depicted in the 1986 movie Hoosiers) – I love you guys.

Missing from the New Year’s Eve lineup is the Barstool Sports Arizona Bowl, which Boise State withdrew from on Dec. 27.

(25) Texas A&M was originally slated to play in the Gator Bowl but canceled due to “COVID-19 issues, injuries.” Rutgers replaced the Aggies on Dec. 23.

Rutgers is 6-4 in bowl play. It last went bowling in 2014, scoring a decisive 40-21 victory over North Carolina in the Quick Lane Bowl.

Wake Forest and Rutgers have met twice previously, a home-and-home series in 1997 and 1999, both wins for the Demon Deacons.

Wake Forest’s No. 13 nationally ranked passing attack got upgraded from playing a Texas A&M D ranked No. 19 in the FBS vs. the pass to a Rutgers’ defense currently ranked No. 66 overall and No. 10 in the Big Ten against the pass. Of the Scarlet Knights’ 11 FBS opponents in 2021, six are ranked among the bottom 20 teams – nationally – in passing offense. The only squads they faced ranked among the top half are Michigan State (No. 57, averaging 244), who they gave up 339 air yards to, Maryland (No. 13, averaging 307), who they allowed 312 and Ohio State (No. 5, averaging 365), who they limited to 333. The Deacons are averaging 308 air yards per game. Even if Rutgers found a way to shut down Wake’s passing attack, it would need to scrape up enough points to win with an offense that’s struggled epically (No. 113 in scoring, No. 86 in rushing and No. 114 in passing).

Rutgers: freshman DB Max Melton (#16) (tied for the fourth most interceptions in the FBS)

Miami Fla. was originally slated to play in the Sun Bowl but withdrew on Dec. 27 due to “COVID-19 protocols”. Central Michigan, which was set to play in the Arizona Bowl but was left stranded after Boise State canceled, replaced the Hurricanes on Dec. 27.

Central Michigan is 3-9 in bowl action, most recently getting thumped 48-11 by San Diego State in the 2019 New Mexico Bowl, also its fifth-consecutive bowl loss. The last win came in the 2012 Little Caesars Bowl, a 24-21 victory over Western Kentucky. The Chippewas have never beaten a current Power 5 member in bowl play.

This is Washington State and Central Michigan’s first-ever football meeting. It’s also the Cougars’ second-ever matchup with a MAC opponent, the only other coming in 1984, a narrow 16-14 home win over Ball State. For the Chippewa’s it’s a similar second-ever clash with a current Pac-12 member, falling 19-6 at Arizona in 2009.

There are two key matchups in this one – first up, it’s the No. 1 back in college football – CMU freshman Lew Nichols III – taking on a Washington State defense that, while ranked a middle-of-the-road No. 84 vs. the run, wrapped up the regular season by holding Washington to a season-low 10 yards of rushing. Though impressive, keep in mind that the Huskies are ranked No. 125 in the nation in rushing offense – only five teams have gained fewer yards per game. On the other side of the ball, it’s a potential catastrophe pitting the Cougars’ passing attack (No. 42 in the FBS) against a Chippewa defense ranked No. 117 in the nation and second to last in the MAC vs. the pass.

Washington State: sophomore QB Jayden de Laura (#4) (No. 1 in the Pac-12 in passing yards per game)

Central Michigan: freshman RB Lew Nichols III (#7) (No. 1 in the FBS in rushing yards per game)

Cincinnati and Alabama have met five times previously but not since 1990. All five games were played during the regular season, all resulted in wins for the Crimson Tide and all but one – the 1984 game in Cincinnati – were played in the state of Alabama.

Alabama is averaging 348 passing yards per game – making it the best unit that Cincy has faced this season. It’s the same Tide attack that is fresh off hanging up 421 air yards on a Georgia D that’s given up an average of 172 (the third best mark in America).

While you’ve got to figure that Alabama will out-athlete and out-depth Cincinnati, the Bearcats have nothing to lose and everything to win. And…did you know that Cincinnati and Georgia are two of only three pass defenses that the Tide will have faced this season who are ranked in the top 20 nationally. The other? Well, friends, that would be Texas A&M at No. 19, also the only team they lost to.

Cincinnati: junior RB Jerome Ford (#24) (tied for No. 6 in the FBS in rushing TDs), senior QB Desmond Ridder (#9) (No. 10 in the FBS in passer rating), sophomore LB Deshawn Pace (#20) (tied for the third most interceptions in the FBS)

These two have only met twice in history, both regular season games, both in Ann Arbor. The most recent meeting came 56 years ago, in 1965, a 15-7 win for Georgia. Prior to that it was 1957, a 56-0 shutout victory for Michigan.

On paper this looks like one of the greatest matchups of all time. In one corner it’s Georgia’s No. 7 nationally ranked scoring offense taking on Michigan’s No. 4 scoring D, while in the other it’s the Wolverines’ No. 13 ranked scoring O taking on the Bulldogs’ No. 1 ranked scoring D. It’s breathtaking.

Georgia’s only loss – the ugly 41-21 decision vs. (1) Alabama in the SEC title game – had two statistical anomalies. First, the Tide hung up a season-high 421 passing yards on a Bulldog D that had given up, on average, 172 (No. 3 in the FBS). Michigan is ranked No. 67 in the FBS in passing offense (averaging 228 yards per game), a middle of the road attack which the Bulldogs ought to easily shut down. The Wolverines’ best performance through the air came, ironically, in the 37-33 loss at (10) Michigan State, a 406-yard performance. But…did you know that the Spartans are ranked dead last – in the nation – vs. the pass?

Next, Alabama’s defense held Georgia to a season-low 109 rushing yards. It was also only the second time this season that UGA didn’t score a rushing TD – the other instance the 10-3 decision vs. (19) Clemson in the opener. Michigan’s defense is ranked No. 21 nationally vs. the run, giving up an average of 121 ground yards per game. Compare that to the Tide’s average of 83 (No. 4 nationally). Is it any coincidence that the Wolverines’ only loss in 2021 was also their worst performance vs. the run? The Spartans rushed for 199 yards and five scores that day.

This ought to be one of the most physical, closely contested games of the season. Throw in the fact that the winner advances to the national championship, and it may be the best overall matchup in 2021.