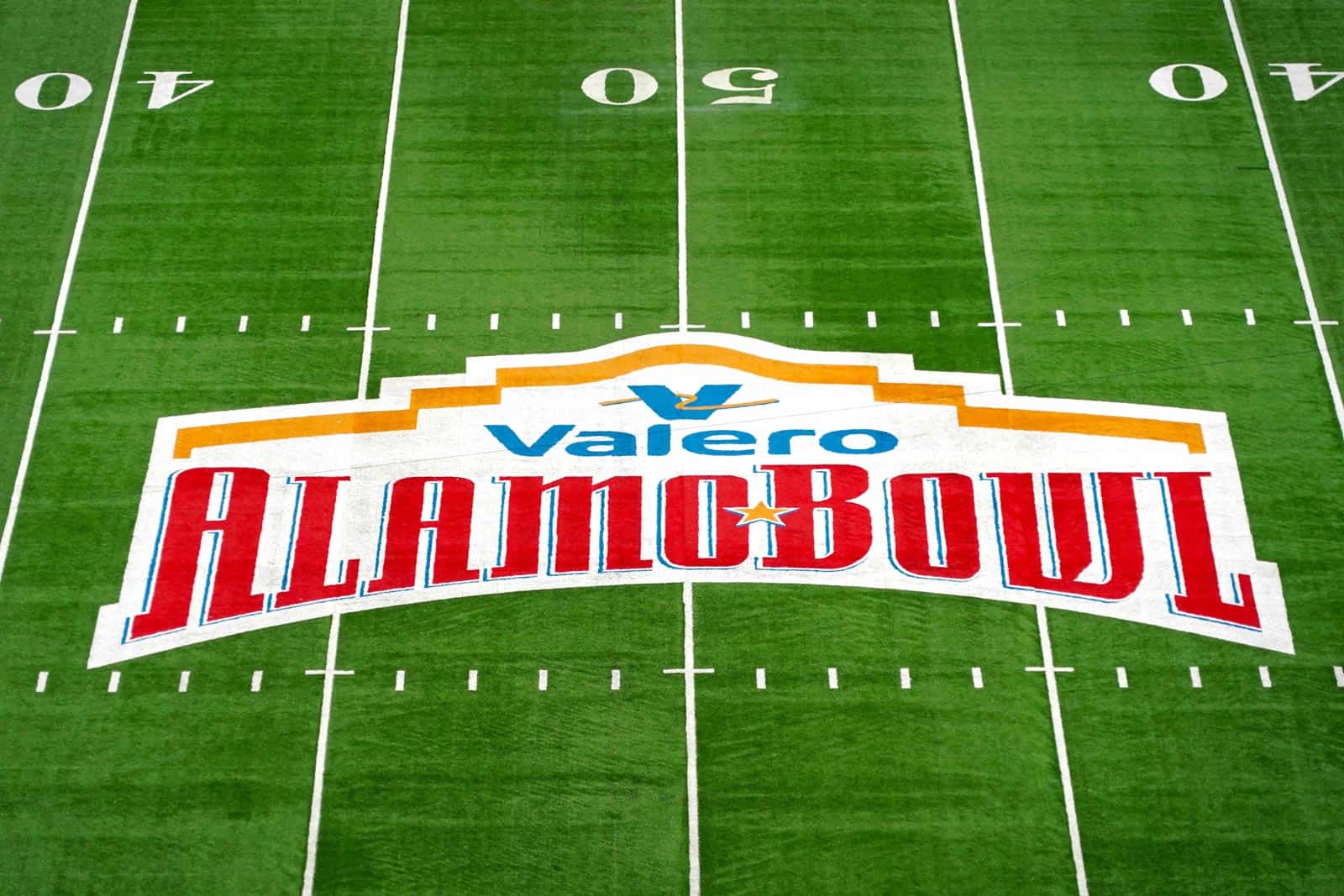 The fourth installment of the 2021 college football bowl schedule breakdown features seven games spread between a busy Wednesday and Thursday. For your viewing pleasure, the entire set airs on ESPN meaning you never, ever need to turn that dial.

While all eyes are rightly on the CFP Semi-Finals on Friday, don’t miss out on this set of games which features 100 percent Power 5 vs. Power 5 pairings including the first two ranked vs. ranked matchups of bowl season.

The first-ever Fenway Bowl, which was scheduled for Wednesday at Noon EST on ESPN featuring SMU and Virginia, has been canceled due to COVID-19 protocols.

Maryland is 11-14-2 in bowl play. It hasn’t been bowling since 2016, falling 36-30 to Boston College in the Quick Lane Bowl, also its third-consecutive bowl loss. The last win came in the 2010 Military Bowl, a 51-20 beatdown of East Carolina. The Terrapins haven’t beaten a current Power 5 program in bowl play since downing Purdue 24-7 in the 2006 Champs Sports Bowl.

These two shared membership in the Southern Conference from 1921-51 and the ACC from 2004-13, with all but four of their 31 total meetings coming as in-conference games. Maryland leads the series 16-15 and won the last meeting, in 2013, also the Terrapins final season in the ACC. The pair have home-and-home series scheduled for 2026/27 and 2028/29.

Though Maryland has been super successful through the air this season (ranked No. 14 in the FBS in passing yards per game), what links it’s six losses is a struggle to balance the pass with a viable rushing component. The Terps averaged 168 rushing yards in their six wins vs. 94 in their six losses. It’s no coincidence that five of the six defeats came against rushing defenses ranked among the top 21 units in the nation, while four of the five wins over FBS teams (they also beat FCS Howard) came vs. defenses ranked at No. 62 or lower. Cue up Virginia Tech, ranked No. 88 nationally vs. the run, and Maryland has an excellent opportunity to win its first bowl game in a decade.

Virginia Tech will be led on the sidelines by interim head coach J.C. Price, who has been at the helm since Justin Fuente was released on Nov. 16. Price played DT for the Hokies in the early 1990s and after a long run as a defensive assistant and then a promotion to the coordinator role at Marshall (2012-20), he returned to his alma mater as the DC this season. Virginia Tech has hired Brent Pry – most recently the DC at Penn State – as its next head coach.

The Hokies will be without junior DB Jermaine Waller (tied for the third most interceptions in the FBS) who has declared for the NFL Draft and opted out of the Pinstripe Bowl as well as sophomore WR Tayvion Robinson (No. 6 in the FBS in punt returns) who entered the transfer portal and will play for Kentucky next season.

Virginia Tech: junior LB Dax Hollifield (#4) (tied for No. 7 in the ACC in total tackles)

Maryland: sophomore QB Taulia Tagovailoa (#3) (No. 12 in the FBS in passing yards per game)

Clemson is 25-22 in bowl action, most recently falling 49-28 to then (3) Ohio State in last season’s Sugar Bowl/CFP Semi-Final.

This is Clemson and Iowa State’s first-ever football meeting.

After ending the last three seasons ranked among the top four teams in the FBS in scoring and among the top 25 in passing offense, Clemson is ranked No. 78 in scoring and No. 103 through the air. Where it averaged 349 passing yards per game in 2020, this year it’s 192. It’s no surprise that the common theme in the Tigers’ three losses is sub-200 yard passing performances – 178 vs. (3) Georgia, 111 at (18) NC State and 151 at (12) Pitt. What’s intriguing is that the trio of victors are all over the shop in pass defense – the Bulldogs are currently No. 3 in the FBS vs. the pass, the Wolfpack is No. 33 and the Panthers are No. 106. Enter in Iowa State – No. 13 nationally in pass defense, allowing 187 yards per game – and this is as interesting a matchup as there is.

Iowa State will be without junior RB Breece Hall (tied for No. 1 in the FBS in rushing TDs and No. 5 in rushing yards per game) who declared for the NFL Draft and is opting out of the Cheez-It Bowl.

Iowa State: senior QB Brock Purdy (#15) (No. 4 in the FBS in completion percentage), junior DE Will McDonald IV (tied for No. 2 in the FBS in forced fumbles and No. 6 in sacks)

The strength vs. strength matchup in this one is Oregon’s No. 24 nationally ranked ground game taking on an Oklahoma D ranked No. 25 in the FBS. Where the Ducks posted 210-plus rushing yards vs. seven of its opponents this season, the Sooners held seven of its foes to 104 or fewer. The best two rushing attacks Oklahoma faced in 2021 were Texas (averaging 199 rushing yards per game, No. 26 in the FBS), which it held to 128 and Baylor (215 rushing yards per game, No. 16 in the FBS), which it allowed a season-high 297. As for the Ducks, it’s no coincidence that they suffered two of their three losses this year to the No. 1 rushing defense in the Pac-12 – Utah. The Utes held an Oregon offense averaging 203 yards per game to 63 in the first loss and 74 in the conference championship.

Both teams will be led on the sidelines by interim head coaches. Oklahoma, who Lincoln Riley left for the USC job, has the legendary Bob Stoops as interim. The Sooners will be led by Clemson DC Brent Venables next season. Oregon, who Mario Cristobal left for the Miami Fla. job, has OC Joe Moorhead (who recently accepted the head job at Akron) as its interim. The Ducks have hired Dan Lanning – most recently the DC at Georgia – as their new head coach. Holy Coaching Carousel of Progress!

Oklahoma will be without junior OLB Nik Bonitto (tied for No. 2 in the Big 12 in tackles for a loss and No. 6 in sacks) who has declared for the NFL Draft and opted out of the Alamo Bowl.

Despite the disappointing 6-6 finish, North Carolina’s offense is ranked No. 17 nationally in scoring and No. 11 in rushing yards per game. It’s a strength that pairs favorably with a Gamecock D that’s been all-world vs. the pass (No. 9) but not so much vs. the run (No. 99 in the FBS/No. 11 in the SEC). Giving up, on average, 179 ground yards per game this season, the Cock D struggled down the stretch coughing up 290, 258 and 265 respectively in losses to (25) Texas A&M (No. 44 in rushing O), Missouri (No. 50) and (19) Clemson (No. 57) in three of its last five outings. Look for the Tar Heels to further expose this weakness. On the other side of the ball, it’s a provocative matchup between South Carolina’s No. 109 ranked scoring offense and North Carolina’s No. 101 ranked scoring D.

South Carolina: senior DB Jaylan Foster (#12) (tied for the second most interceptions in the FBS and No. 22 in solo tackles)

These two have only met once previously – the 1979 Bluebonnet Bowl in Houston, a 27-22 win for the Boilermakers.

Tennessee has quietly earned a No. 9 national rank in scoring offense and a No. 19 mark in rushing yards per game. The combination will provide a stiff test for a Purdue D ranked No. 22 in the FBS in scoring that’s been more successful vs. the pass (No. 21) than the run (No. 55). The Boilermakers’ resume includes limiting an Oregon State squad averaging 217 ground yards per game (No. 12) to 77 and allowing a Wisconsin unit averaging 215 (No. 15) a season-high 290. On the other side of the ball, it’s a mismatch pitting Purdue’s world-class passing attack (No. 8 in America) vs. a Volunteer D ranked No. 104 in the FBS (and No. 13 in the SEC) vs. the pass.

Purdue will be without junior WR David Bell (No. 4 in the FBS in receiving yards per game) who has declared for the NFL Draft and opted out of the Music City Bowl.

Tennessee: senior QB Hendon Hooker (#5) (No. 3 in the FBS in passer rating)

Purdue: senior QB Aidan O’Connell (#16) (No. 3 in the FBS in completion percentage and No. 14 in passing yards per game), junior S Cam Allen (#10) (tied for the third most interceptions in the FBS)

Pitt is 14-21 in bowl action. It last went bowling in 2019, scoring a 34-30 victory over Eastern Michigan in the Quick Lane Bowl. The Panthers haven’t beaten a current Power 5 member in bowl play since the 2010 BBVA Compass Bowl, a 27-10 win over Kentucky.

Michigan State and Pitt have met seven times previously, most recently playing a home-and-home series in 2006/07. The Panthers have never beaten the Spartans but did manage a 7-7 tie in the 1960 contest in Pittsburgh. This is the first-ever postseason meeting.

Historically speaking, this matchup sounds like a slugfest between two old-school programs grinding it out on the ground. The truth, instead, is that it has the potential to be an absolute aerial show that could blow up the scoreboard. Tune in to see Pitt’s passing game – ranked a lofty No. 6 in the nation – take on a Michigan State ranked dead last – in America – vs. the pass. Where the Panthers have eclipsed the 375 passing yard mark six times this season, the Spartans have coughed up 350-plus on six occasions.

PS – Pitt head coach Pat Narduzzi was the uber-successful DC at Michigan State under Mark Dantonio from 2007-14. It’s the job that got him this job, and – this is his first clash with his former employer as a head coach.

Pitt senior QB Kenny Pickett (No. 3 in the FBS in TD passes and No. 7 in passing yards per game) has declared for the NFL Draft and has opted out of the bowl game. He’ll be replaced under center by junior QB Nick Patti (#12) who is 12-of-14 for 140 yards in seven appearances this season.

Michigan State will be without junior RB Kenneth Walker III (No. 2 in the FBS in rushing yards per game) who has also opted out of the Peach Bowl to prepare for the NFL Draft.

Michigan State: sophomore DE Jeff Pietrowski (#47) (tied for the third most forced fumbles in the FBS)

Pitt: sophomore WR Jordan Addison (#3) (No. 1 in the FBS in receiving TDs and No. 6 in receiving yards per game)

Wisconsin and Arizona State have met four times previously, all during the regular season with all but one – the 2010 contest – resulting in wins for the Sun Devils.

These two programs are both run-centric on offense – where the Badgers are ranked No. 15 nationally in rushing yards per game vs. No. 118 in passing the Sun Devils are a similar No. 23/No. 97. It’s therefore no coincidence that both teams share the same common thread in their four losses – gaining under a certain threshold of rushing yards. For Wisconsin – which averaged 215 ground yards per game this season – it was 180 in the loss to Penn State, 78 to (5) Notre Dame, a season-low 43 to (2) Michigan and then 62 in the finale at Minnesota. For Arizona State – averaging 204 – it was 161 in the loss at (13) BYU, 148 at (11) Utah, 131 vs. Washington State and a season-low 100 at Oregon State. Which squad has the best rushing defense? On paper, it’s far-and-away the Badgers – No. 1 in the entire nation vs. the run (61 yards per game) – as opposed to ASU, ranked a respectable, though not elite, No. 36 (129 yards per game).

Arizona State: senior LB Merlin Robertson (#8) (tied for the fourth most interceptions in the FBS)