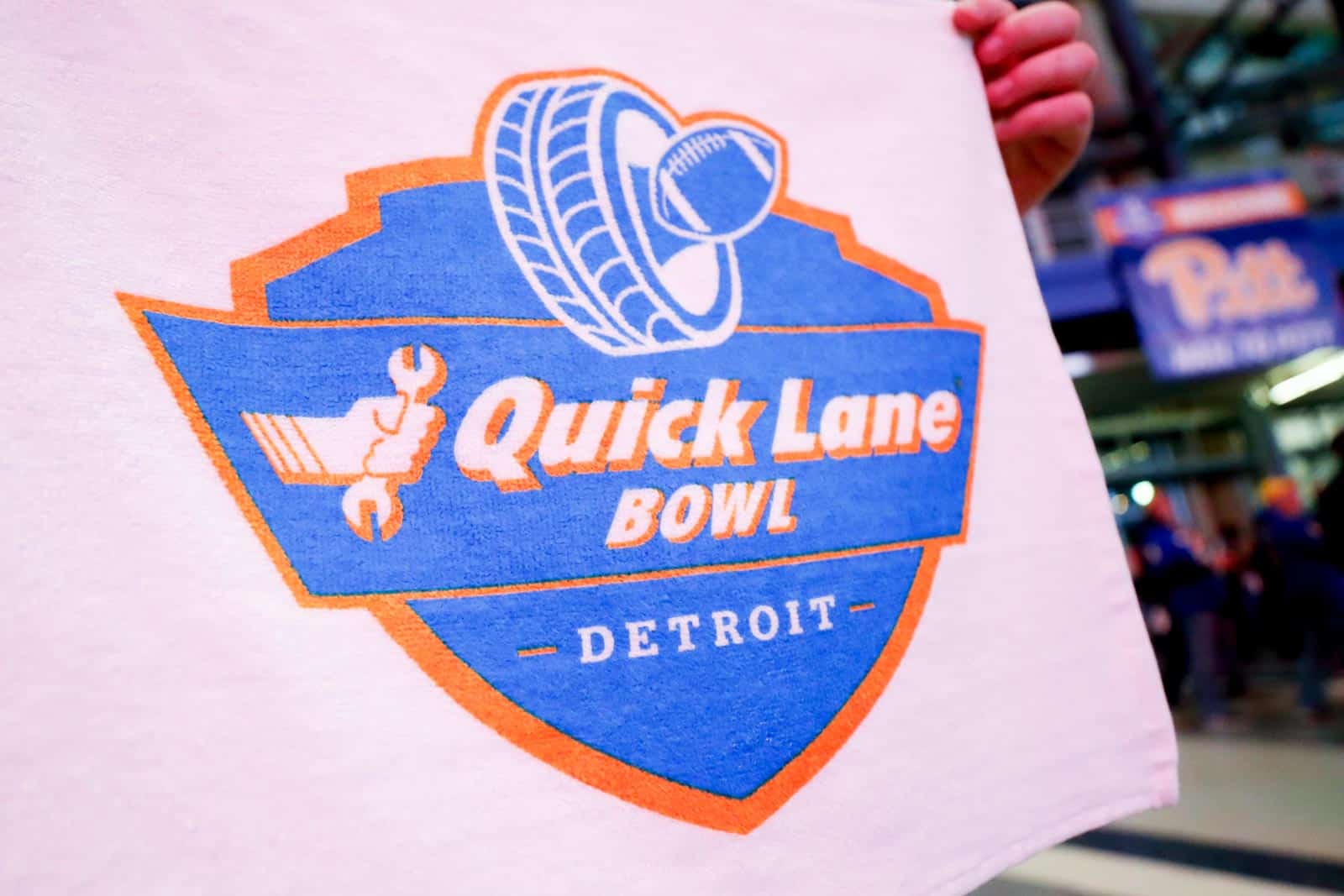 The third installment of our tiptoe through the 2021 college football bowl schedule zeros in on the six games spread between Monday and Tuesday.

The set gets rolling with a single game on Monday – the Quick Lane Bowl at Noon EST on ESPN. The Military Bowl was scheduled for that same afternoon but was canceled due to COVID-19 protocols.

Tuesday is home to a whopping five games that are spread evenly across the day and evening – start times (all EST) are at Noon, 3:15pm, 6:45pm, 8pm and 10:15pm. All but one – the Holiday Bowl at 8pm on FOX – are on ESPN. It’s one of only three times during bowl season that you’ll turn away from the ABC/ESPN family of networks.

Though this offering might not have the obvious appeal of what we’ll build up to as the week progresses, two Group of 5 programs can upset a Power 5 opponent – and – there are three Power 5 vs. Power 5 matchups on tap. What we’ve got here folks is quality viewing and as a bonus – there aren’t any more presents to wrap.

Welcome to the wildest six days in college football.

Western Michigan is 1-9 in bowl action. It last went bowling in 2019, falling 23-20 to Western Kentucky in the First Responder Bowl. The only bowl win in program history came in the 2015 Bahamas Bowl, a 45-31 victory over Middle Tennessee.

This is Western Michigan and Nevada’s first-ever football meeting.

On one side of the ball this pairing presents a fascinating strength vs. strength matchup – Nevada’s super-sonic passing attack, ranked a cool No. 4 in the entire FBS, taking on a Western Michigan D ranked No. 17 in the nation vs. the pass. What’s interesting about the Broncos’ statistical resume is where they held their last two opponents (Eastern Michigan and Northern Illinois) to a combined total of only 198 air yards, they allowed a whopping 548 to the two before that (Central Michigan and Akron). EMU is ranked No. 33 nationally in passing yards per game, NIU is No. 105, CMU is No. 29 and Akron is No. 79. Ladies and gentlemen, the real Bronco defense is about to stand up and be counted.

Nevada will be without junior QB Carson Strong (No. 5 in the FBS in passing yards per game) who has declared for the NFL Draft and has opted out of the bowl game. His replacement is expected to be senior Nate Cox (#16) who went 14-of-20 for 158 yards and one TD in nine appearances this season. Also missing for the Wolfpack is senior LB Daiyan Henley (#11) (tied for the third most interceptions in the FBS) who entered the transfer portal and has since chosen Washington State as his next stop.

A rematch of the 1969 Bluebonnet Bowl in Houston (a 36-7 win for the Cougars), Auburn and Houston have met six times previously but not since 1973. The Tigers hold a commanding 5-1 lead in the all-time series.

Though Auburn’s defense has been solid this season (No. 33 nationally in scoring) it has been more successful shutting down the run (No. 33) than containing the pass (No. 93). Only three teams in the SEC have given up more air yards per game than have the Tigers. Cue up Houston – quietly the No. 24 ranked passing attack in the FBS – and things could get interesting. In their most recent outing, the Cougars hung up 250 air yards on a Cincinnati D giving up 168 – the second fewest in America. On the other side of the ball, keep in mind that Houston has a top-ranked defense (No. 27 nationally in scoring, No. 13 vs. the run and No. 16 vs. the pass).

Houston will be without senior CB Marcus Jones (tied for the second most interceptions in the FBS), who has declared for the NFL Draft and opted out of the bowl game.

This is Air Force and Louisville’s first-ever meeting on the gridiron.

This one will likely come down to how well Louisville’s defense can contain Air Force’s option attack, ranked No. 1 in the FBS in rushing yards per game. The Cardinals’ D allowed an average of 138 ground yards through its first 11 opponents only to cough up 362 rushing yards and seven rushing TDs to Kentucky (averaging 206 rushing yards per game) in the season finale, a 52-21 beatdown. Keep in mind that Air Force’s defense has performed splendidly in 2021 – ranked No. 13 in scoring, No. 7 vs. the run and No. 20 vs. the pass.

Texas Tech and Mississippi State have met seven times previously but not since 1970. The Bulldogs lead the series 4-2-1 and won the last two, this is the first-ever postseason meeting. The two have future dates booked in 2028 and 2029.

Though for Tech enthusiasts this matchup is all about reuniting with their beloved ex-coach and forever swashbuckling hero Mike Leach, the on-field situation is a potential ugly mismatch. In one corner it’s a Mississippi State offense ranked an unsurprising No. 3 in the FBS in passing yards per game while in the other it’s a Texas Tech D ranked No. 118 vs. the pass. Where only two teams in the nation have managed to rack up more air yards than have the Bulldogs, only 12 have coughed up more than have the Red Raiders. Peaches and Herb may need to revise the title of their 1978 super hit from “Reunited and it Feels So Good” to “Reunited and I Should Have Watched the Holiday Bowl.”

Despite taking the head job at Louisiana Tech, the Red Raiders will be led on the field one last time by interim head Sonny Cumbie, who is 1-3 in the four games since Matt Wells was released. Cumbie was the starting QB at Texas Tech in 2004, Mike Leach’s fifth season in Lubbock.

Mississippi State: sophomore QB Will Rogers (#2) (No. 3 in the FBS in passing yards per game)

These two have met twice previously but not in 61 years. Both meetings were in Los Angeles during the regular season, coming back-to-back in 1959 and 1960 and both resulted in wins for UCLA.

The strength vs. strength matchup in this pairing features UCLA’s No. 16 nationally ranked scoring offense – headlined by a ground game ranked No. 17 in the FBS – taking on an NC State defense ranked No. 18 in scoring and No. 24 vs. the run. The mismatch comes on the other side of the ball when the Wolfpack’s passing attack, ranked a lofty No. 19 nationally in yards per game, takes on a Bruin D ranked No. 111 in the nation and dead last in the Pac-12 vs. the pass.

UCLA: senior LB Mitchell Agude (#45) (tied for the third most forced fumbles in the FBS)

This is West Virginia and Minnesota’s first-ever football meeting.

The common thread in West Virginia’s losses in 2021 is an epic struggle to run the ball. Where the Mountaineers averaged 191 rushing yards in their six wins, they averaged a mere 66 in their six losses. It’s a fact that seems almost apocalyptic vs. a Minnesota D that’s quietly No. 9 in America vs. the run. The Gophers’ elite D (also ranked No. 9 nationally in scoring and No. 10 against the pass) is giving up, on average, 100 rushing yards per game.

West Virginia: senior LB Josh Chandler-Semedo (#7) (tied for No. 18 in the FBS in solo tackles)