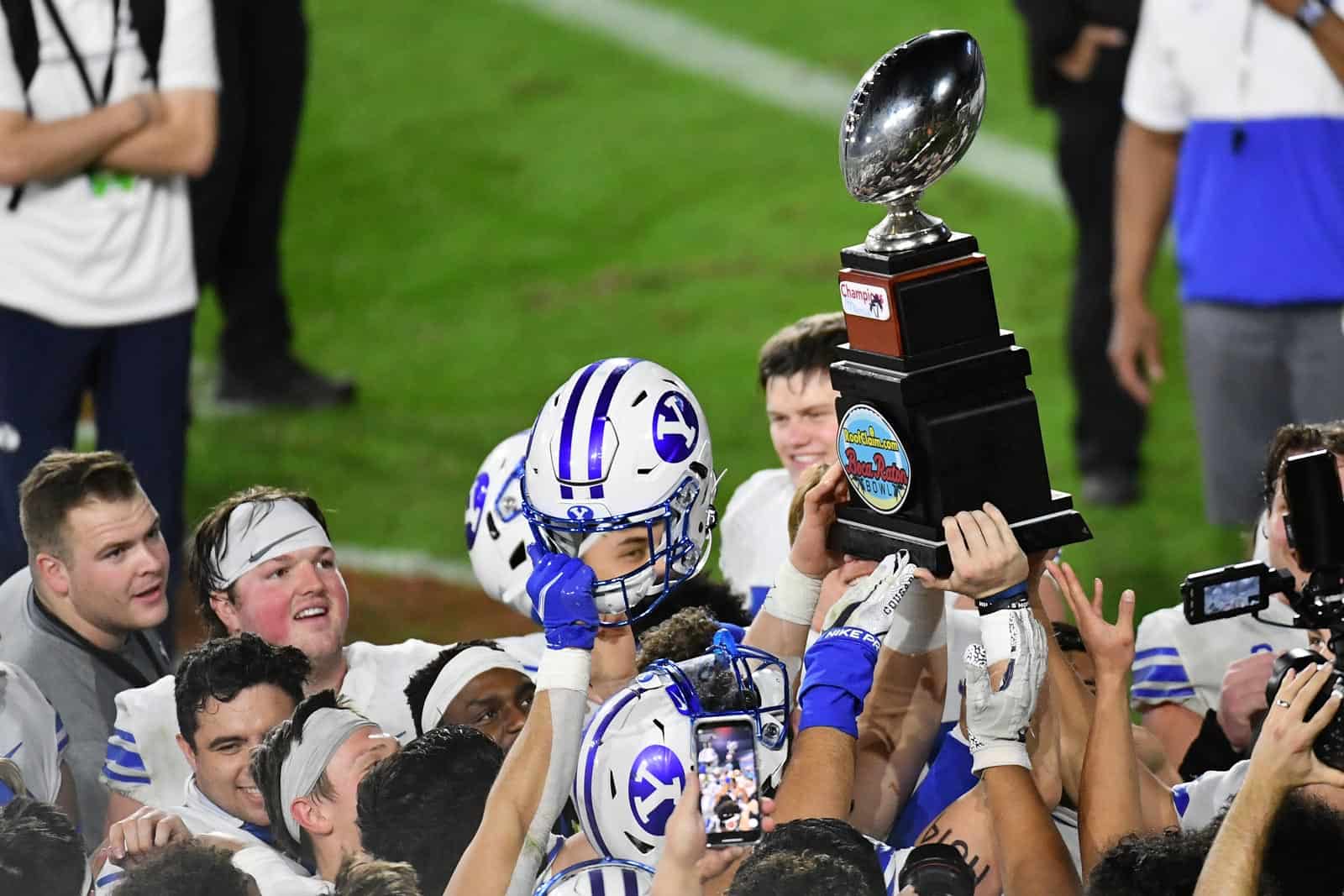 Just when you thought it was safe to turn on ESPN while wrapping your Yule Log, it’s bowl season.

What follows is the first installment of a six-part series that will serve as your trusty companion as we walk together, game-by-game, through the good, the bad and the inevitable upset. Keep it handy as it’s your source for when to watch, what to watch for, and who to watch doing it.

As an opening tip – don’t assume that this first set of games is a bunch of sub-par squads in pillow fights. Instead, two ranked teams and five conference champions are in action this weekend. These hard-working athletes have earned the privilege to be watched and admired.

Middle Tennessee is 2-6 in bowl action. It last went bowling in 2018, falling 45-13 to Appalachian State in the New Orleans Bowl. It’s most recent bowl win came a year earlier, in 2017, when it beat Arkansas State 35-30 in the Camellia Bowl.

This is Middle Tennessee and Toledo’s first-ever football meeting.

This is a solid matchup between Toledo’s ground attack (ranked No. 31 in the FBS) and Middle Tennessee’s rush D (No. 32 in the country). Where the Rockets closed out the regular season by averaging 267 rushing yards in its last three outings – all wins – the Blue Raiders went 4-2 down the stretch and held their final six opponents to 73 rushing yards per game. This is a gem of an early bowl.

This is Coastal Carolina’s second-ever bowl appearance. The Chanticleers fell 37-34 in overtime to (23) Liberty in last season’s Cure Bowl.

This is Northern Illinois and Coastal Carolina’s first-ever football meeting.

This game features two of the most elite rushing attacks in the country taking on defenses that have enjoyed different levels of success vs. the run. On one hand it’s Northern Illinois’ ground game – ranked a lofty No. 5 in the nation – taking on a Coastal Carolina D ranked No. 35 against the run and No. 19 in scoring. Flip the script and it’s a Chanticleer rushing offense – ranked a just as impressive No. 6 overall – squaring off with a Huskie defense ranked No. 120 in the nation vs. the run. Only ten teams in the FBS have given up, on average, more rushing yards this season than has NIU.

Northern Illinois: freshman RB Jay Ducker (#8) (No. 3 in the MAC in rushing yards per game)

Western Kentucky is 4-3 in bowl action. It most recently lost 39-21 to Georgia State in last year’s LendingTree Bowl. Its most recent win came the previous season, in 2019, when it edged Western Michigan 23-20 in the First Responder Bowl.

Western Kentucky and Appalachian State have met four times previously but not since 2000. The Mountaineers hold a commanding 4-1 lead in the all-time series, the Hilltoppers’ only win coming 48 years ago in 1973. This is the first postseason meeting between the two.

A quality battle between the runners-up in the C-USA and Sun Belt, this one will likely come down to how well Appalachian State’s solid defense can contain Western Kentucky’s blistering offense – the No. 1 passing attack in college football. The Mountaineers’ D – ranked No. 32 nationally vs. the pass – has faced three top-ranked air attacks this season, all successfully. They held a Miami Fla. offense averaging 321 passing yards per game (No. 10 in the FBS) to 200, an Arkansas State attack averaging 313 (No. 11 in the FBS) to 137 and a Marshall unit averaging 310 (No. 12) to 270. What may make the difference is WKU’s defense, which has struggled to a No. 89 overall finish in scoring and a No. 98 rank in total D.

What’s powered Jackson State’s 11-1 run (the only loss a 12-7 defeat at FBS ULM) is an elite defense. The Tigers are ranked No. 3 nationally in scoring, No. 10 vs. the run and No. 3 vs. the pass. It may prove too much for an SC State offense that while not desperate hasn’t necessarily been on fire, averaging 24 points per game (No. 73 in the FCS). Flip the script and it’s a Jackson State passing offense averaging 255 yards per game (No. 26 in the FCS) vs. a Bulldog D that’s ranked No. 65 nationally vs. the pass.

SC State: sophomore WR Shaquan Davis (#1) (No. 20 in the FCS in receiving yards per game)

UTEP and Fresno State have met 12 times previously but not since 2004. The Bulldogs lead the series 8-3-1 but the two have split the last four. This is the first-ever postseason meeting.

This one features a solid strength vs. strength matchup pitting Fresno State’s top-ranked passing attack (No. 9 in the FBS) taking on a UTEP D that finished the season ranked No. 29 vs. the pass. It’s the same Miners’ unit that held a New Mexico State passing attack averaging 269 air yards per game (No. 26 in the FBS) to 92 passing yards and a Louisiana Tech O averaging 261 (No. 36) to 186. If UTEP can limit the Bulldog’s through the air it will be up to its offense, averaging only 25.2 points per game (No. 89 in the FBS), to find a way to score enough points to win.

With Kalen DeBoer off to take the head job at Washington, Fresno State will be led on the sidelines by interim head coach Lee Marks. Marks played running back at Boise State from 2002-05, returned to his alma mater as an assistant from 2014-19 and joined the Fresno State staff in 2020 to coach running backs. The Bulldogs have hired Jeff Tedford for next season.

UTEP: sophomore WR Jacob Cowing (#6) (No. 7 in the FBS in receiving yards per game)

Fresno State: senior QB Jake Haener (#9) (No. 8 in the FBS in passing yards per game, as of the publication of this article it is unknown if Haener, who recently withdrew from the transfer portal, will participate in the bowl game), senior DE Arron Mosby (#3) (tied for No. 2 in the FBS in forced fumbles)

This is the first-ever football meeting between UAB and BYU.

BYU: sophomore RB Tyler Allgeier (#25) (tied for No. 1 in the FBS in rushing TDs and No. 6 in rushing yards per game)

Eastern Michigan and Liberty have only met once previously, during the 1989 regular season, a 25-24 win for the Flames. The two are scheduled to meet again in a home-and-home series in 2023/24.

Though Eastern Michigan’s offense has been more effective through the air (No. 33 in the FBS in passing yards per game) than on the ground (No. 112), it’s running success that links its wins. The Eagles averaged 173 rushing yards per game in its seven victories vs. 41 in its five losses. That puts the pressure squarely on a Liberty D that is allowing 141 ground yards per game (No. 49), the same unit that held an Ole Miss offense averaging 224 (No. 8 in the FBS) to a mere 142. Liberty is fresh off three straight losses with a combined turnover margin of -11 (six interceptions and three fumbles), plummeting them, almost overnight, to a No. 125 rank in turnover margin.

Eastern Michigan: senior QB Ben Bryant (#8) (No. 11 in the FBS in completion percentage)

Utah State is 5-8 in bowl play, most recently falling 51-41 to Kent State in the 2019 Frisco Bowl. The last win came the year before, in 2018, a 52-13 beatdown of North Texas in the New Mexico Bowl. The Aggies have never beaten a current Power 5 member in a bowl game.

Utah State and Oregon State have played three times previously but not since 1998. The Beavers are a perfect 3-0 vs. the Aggies, this is the first-ever postseason meeting.

These two teams have opposite offensive strengths – where Utah State has been successful through the air (No. 15 in the FBS in passing yards per game), Oregon State has gotten it done on the ground (No. 12 in rushing yards per game). What they share are defenses that have struggled this season against their bowl opponent’s strengths – the Aggies’ D is No. 86 nationally vs. the run while the Beavers’ defense is No. 87 vs. the pass. While these aren’t extremes, the better defense wins this one.

Oregon State will be without junior ILB Avery Roberts (#34) (No. 6 in the FBS in total tackles) who is out due to a recent “minor surgery”.

Louisiana is 6-2 in bowl play. It most recently knocked off UTSA 31-24 in last season’s First Responder Bowl.

Marshall is 12-4 in bowl action but has dropped two-straight. Its most recent win came in the 2018 Gasparilla Bowl, a 38-20 victory over USF.

This is the first-ever football meeting between Louisiana and Marshall.

This intriguing little number features Marshall’s elite passing attack – the No. 12 unit in all the land – taking on a Louisiana D ranked No. 26 nationally vs. the pass and No. 9 in scoring. On one hand it’s an aerial show that’s hung up 320-plus passing yards on six of its opponents this season and on the other it’s the same guys who held five of their opponents to fewer than 140 passing yards this year. Whose strength is stronger? What may decide things is the Ragin’ Cajun ground game – a highly respectable No. 33 overall – taking on a Thundering Herd defense ranked a slightly disreputable No. 105 nationally and No. 12 in the C-USA vs. the run.

With Billy Napier off to the cash-rich shores of Florida, the Cajuns will be led on the sidelines by Michael Desormeaux, who was recently promoted to head coach. Desormeaux played QB at Louisiana from 2004-08 and has served as an offensive assistant there since 2016.

Marshall: freshman RB Rasheen Ali (#22) (tied for the most rushing TDs in the FBS), freshman QB Grant Wells (#8) (No. 15 in the FBS in passing yards per game)

This is good stuff! Great detail with added little nuggets that give me a reason to watch these lower tiered bowls. Thanks for putting these together.

I miss the AdvoCare V100 bowl. Those were the days.