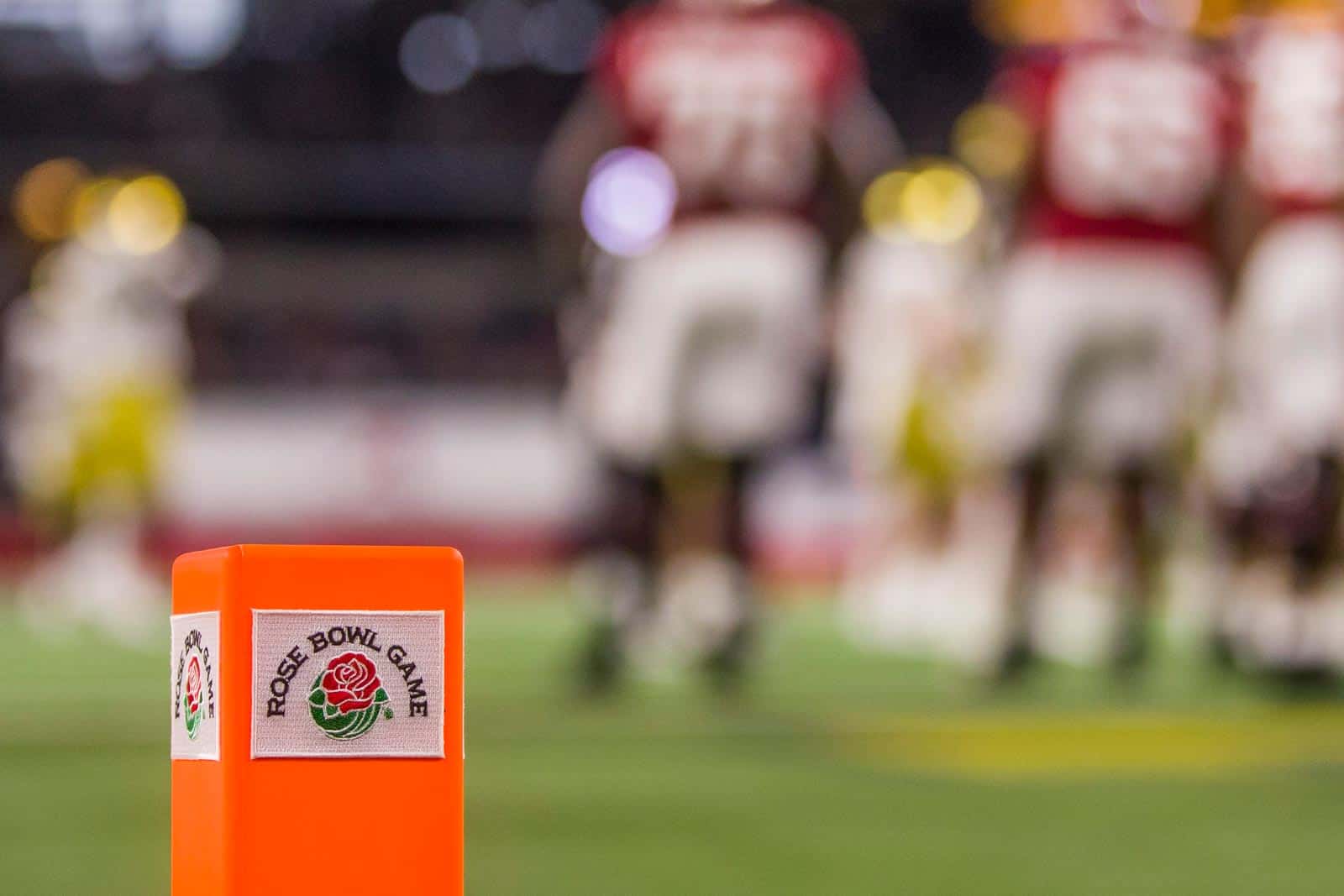 What remains – other than the CFP title game on Jan. 10 – are the final six bowl games, five of which are scheduled for New Year’s Day and one, the official hangover game of the 2021 season, on Jan. 4.

Saturday kicks off at Noon EST on ESPN2 and then gains momentum with a pair of games on ESPN/ABC at 1pm EST. After that it’s a double-header on ESPN – the Grandaddy of Them All at 5pm EST followed by the Sugar Bowl at 8:45pm EST.

That leaves the Texas Bowl, slated for next Tuesday night at 9pm EST, on, you guessed it – ESPN.

Thanks to anyone who made it this far and to all of those who stopped by and visited our bowl party when you could – it’s been, as they say in the biz, a real delight.

This is Arkansas and Penn State’s first-ever football meeting.

The Razorback defense gave up, on average, 171 passing yards in its eight wins vs. an average of 303 in its four losses. Cue up Penn State, which is ranked No. 22 nationally in passing yards per game vs. No. 118 in rushing and things get interesting. While the Nittany Lions have had success through the air, they’ve struggled to score points, averaging 26.3 points per game (No. 81 overall). On the flip side, how about an Arkansas rushing attack ranked No. 12 in America taking on a Penn State D ranked No. 7? This is a quality matchup that is worth rolling over on the couch to watch.

Arkansas will be without junior WR Treylon Burks (tied for No. 11 in the FBS in receiving TDs) who has declared for the NFL Draft and is opting out of the Outback Bowl.

Penn State will be without senior WR Jahan Dotson (tied for No. 6 in the FBS in receiving TDs and No. 15 in receiving yards per game), who has also declared for the NFL Draft and opted out of the bowl game and will likely also be missing senior DE Arnold Ebiketie (No. 7 in the FBS in tackles for a loss) who is expected to take the same route.

Arkansas: sophomore QB KJ Jefferson (#1) (No. 6 in the FBS in passer rating), senior LB Bumper Pool (#10) (tied for No. 10 in the FBS in total tackles), senior DB Montaric Brown (#21) (tied for the second most interceptions in the FBS)

Penn State: senior S Ji’Ayir Brown (#16) (tied for the third most interceptions in the FBS)

This is Oklahoma State and Notre Dame’s first-ever football meeting. The Cowboys have never lost to a current independent program: 1-0 vs. New Mexico State, 2-0 vs. BYU and 1-0 vs. Army.

Though Oklahoma State – and the entire Big 12 – are better known for their wild passing attacks, this Cowboy squad has reached double-digit wins with a stifling defense. OSU is ranked No. 7 in the FBS in scoring D, No. 5 vs. the run and No. 12 vs. the pass. Notre Dame, which is an impressive No. 20 nationally in scoring offense (35.3 points per game), has squared off with five defenses currently ranked in the top 30 in scoring, two of which are in the top ten. How did the Irish fare against defenses with similar stats as the Cowboys? Well, they hung up 41 points on a Wisconsin D allowing an average of 16.4 (No. 6 in the FBS) in Week 4 and then turned around the next Saturday and managed a mere 14 points vs. a Cincinnati defense allowing 16.1 (No. 4). Oklahoma State’s D will decide this one.

With Brian Kelly’s shocking relocation to Baton Rouge, the Irish will be led on the sidelines by Marcus Freeman, who is making his head coaching debut after being promoted from his role as the DC. Freeman was a linebacker at Ohio State and kicked off his coaching career as a GA in Columbus in 2010. From there he traveled the Midwest as a defensive assistant making stops at Kent State, Purdue, and Cincinnati before landing in South Bend this season.

Notre Dame will be without sophomore RB Kyren Williams (tied for No. 19 in the FBS in rushing TDs) who has declared for the NFL Draft and has opted out of the Fiesta Bowl.

This is Iowa and Kentucky’s first-ever meeting on the gridiron.

The solid strength vs. strength matchup in this one is Kentucky’s ground attack – ranked No. 22 nationally – taking on an Iowa defense ranked No. 15 in the FBS vs. the run. Keep in mind that where the Wildcats (which averaged 206 yards per game in 2021) finished the season strong, averaging 268 rushing yards in its last four outings, the Hawkeyes (which gave up an average of 114 yards per game this year) digressed, allowing an average of 148 to its last four opponents. Iowa, which has been epically ineffective offensively in 2021 (No. 96 in scoring, No. 111 in passing and No. 110 in rushing), will need all the defensive firepower it can get its’ hands on to have a chance.

PS The Hawkeyes lead the nation in interceptions (24) while Kentucky junior QB Will Levis (#7) has thrown 12 picks this season, tying him for the fourth most in the FBS.

Ohio State is 26-27 in bowl play, most recently triumphing 49-28 over then (2) Clemson in last year’s Sugar Bowl/CFP Semi-Final. It finished last season with a 52-24 defeat to (1) Alabama in the CFP title game.

Ohio State and Utah have only met once previously, a 1986 regular season game in Columbus that the Buckeyes won 64-6.

Baylor and Ole Miss have met only once previously, a regular-season game in Waco in 1975, a 20-10 win for the Bears.

This matchup features two elite running offenses facing defenses that have enjoyed different levels of success. First up, it’s Ole Miss’ ground game, the No. 8 unit in America, taking on a Baylor D ranked No. 17 in the nation vs. the run. On the flip side, it’s the Bears’ No. 16 ranked rushing offense taking on a Rebel D ranked No. 102 against the run. While the numbers give Baylor a clear advantage, did you know that the Bears No. 14 ranked scoring defense is also ranked a somewhat concerning No. 71 nationally and No. 6 in the Big 12 vs. the pass? It’s the same unit that coughed up 342 air yards to a (13) BYU offense averaging 270 (No. 25) and 468 to a TCU squad averaging 240 (No. 59). Ole Miss is ranked No. 21 nationally in pass O, averaging 282 yards per game. This is a great matchup between a defensive minded coach and a coach hell bent on ringing up the scoreboard.

K-State and LSU have met once previously, during the 1980 regular season, a 21-0 shutout victory for the Tigers in Baton Rouge. The Wildcats have never scored a point on LSU.

The common thread in K-State’s losses this season was an inability to stop the run. Where the Wildcats gave up, on average, 94 rushing yards in its seven wins, it almost doubled that number in its four losses (172). It puts pressure on the weakest component of LSU’s offense – a running game that finished 2021 ranked No. 117 in the FBS and No. 13 in the SEC in yards per game. If you throw out the Tigers’ season-high 321 ground yards in the upset win over Florida, they averaged a mere 90 in their other 11 outings. The only good news is, LSU finished the season on the upswing, averaging 104 rushing yards in its last four games vs. 71 in its first five.

With Ed Orgeron out of the picture, and former Notre Dame head coach Brian Kelly waiting in the wings, LSU will be led on the sidelines by interim Brad Davis. A Baton Rouge native, Davis was an offensive lineman for Oklahoma in the early 2000s and served as an assistant all over the country before landing consecutive stops as an O-line coach in the SEC: Florida (2017), Missouri (2018-19), Arkansas (2020) and finally LSU (2021).

LSU senior LB Damone Clark (No. 2 in the FBS in total tackles and No. 4 in solo tackles) has opted out of the Texas Bowl to prepare for the NFL Draft.