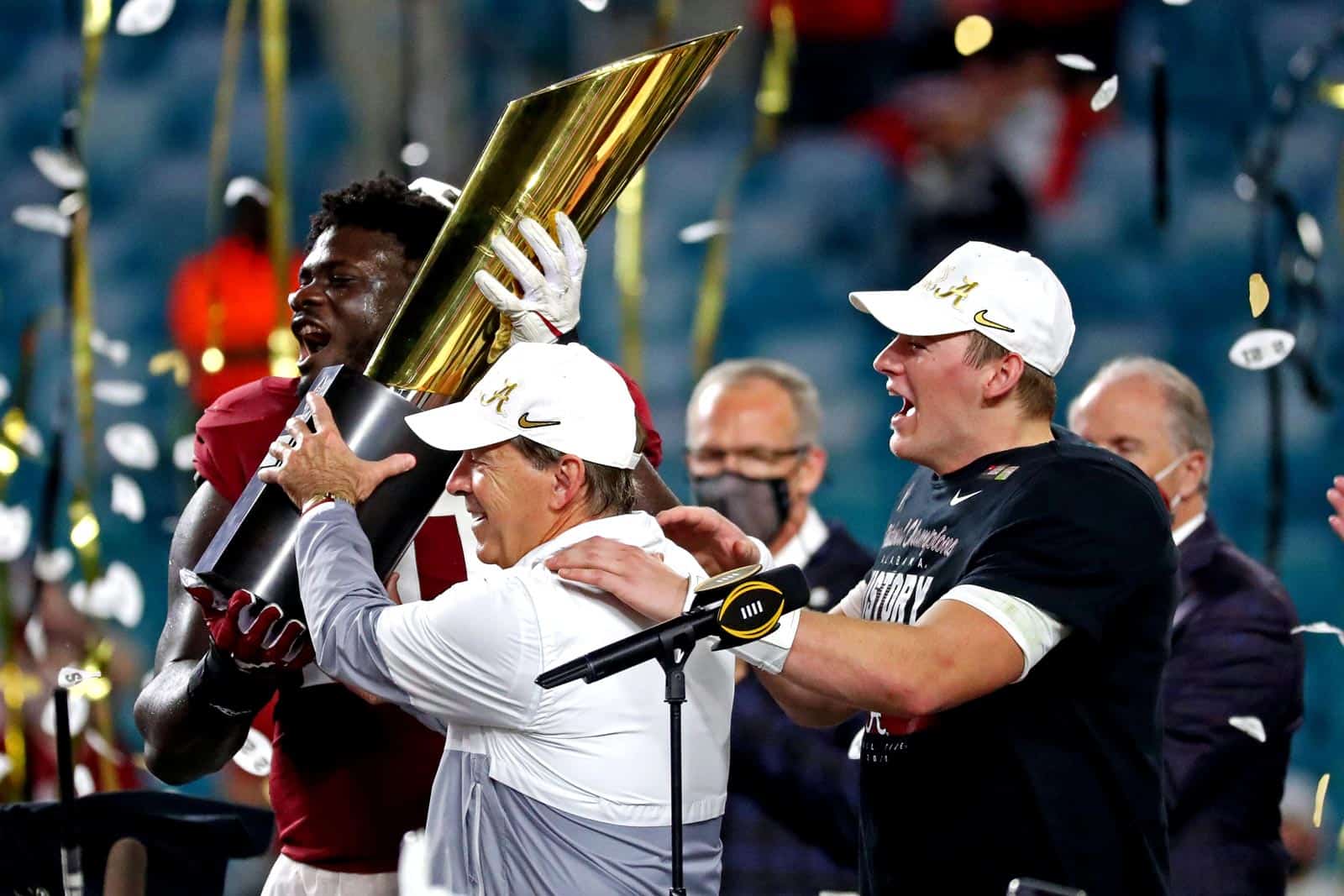 The college football bowl games for 2021-22 will be announced today, including the College Football Playoff and New Year’s Six selections and schedule.

Below we will live blog the bowl games and pairings as they are announced on Sunday. The College Football Playoff Semifinals are expected to be announced first at around 12:15pm ET on ESPN.

Bowl games hosting the College Football Playoff Semifinals this season are the Goodyear Cotton Bowl at AT&T Stadium in Arlington, Texas, and the Capital One Orange Bowl at Hard Rock Stadium in Miami Gardens, Fla. Both semifinal games will be played on New Year’s Eve, Friday, Dec. 31, 2021.

This season’s College Football Playoff National Championship will be played at Lucas Oil Stadium in Indianapolis, Ind., on Monday, Jan. 10, 2022.

Here’s what we know so far:

Sunday, 12:07pm:  The time has come. A bunch of analysis about things we already know and have seen — with talent turning their backs to the camera. Our next milestone is about 12:30, when we’ll hear the top six. Grab a beverage — and maybe some Red Bull — and spend the afternoon with us!

Sunday, 12:14pm:  Poor Molly McGrath. ESPN sent her to Waco, only to have her mention that Dave Aranda is on a recruiting trip and the word “playoff” was never mentioned.

“We’re not trying to manufacture any drama,” ESPN says — as it manufactures drama.

I'm hearing it's all but a done deal that the #Gators are going to play #UCF in the Gasparilla Bowl in Tampa on Dec. 23 at 7 p.m.

All signs point to UNT landing in one of the two bowls that will be played in Frisco, sources have confirmed to the #DentonRC

UTEP vs Fresno State in the New Mexico Bowl

Sunday, 1:11pm:  Still a bunch of yakking on the network releasing all this stuff, but:

Sunday, 1:32pm:  The slow trickle continues, as we have times for the two games.

Sunday, 1:45pm:  Utah State will play in the LA Bowl and Pitt the Peach Bowl, per Brett McMurphy.

Sunday, 1:53pm:  BYU will play in the Independence Bowl and Baylor in the Sugar.

Sunday, 1:59pm:  Appalachian State vs. Western Kentucky in the Boca Raton Bowl. That should be a fun one.

Sunday, 2:04pm:  Two hours into ESPN’s coverage, and we still don’t have the NY6 yet. We do, however, have Kent State vs. Wyoming in the Famous Idaho Potato Bowl.

Sunday, 2:11pm:  Michael Desormeaux’s first game at Louisiana’s head coach will ostensibly be against Marshall in the New Orleans Bowl. Also, we mentioned BYU in the Independence Bowl earlier — they’ll tee it up against UAB.

Sunday, 2:20pm:  Boise State and Central Michigan will trek to the Arizona Bowl. Cue the commentary from both sides about that bowl’s title sponsor.

Sunday, 2:28pm:  We’ve already listed most of these games, but ODU and Tulsa will head to the Myrtle Beach Bowl, our friends over at CUSA Report…well, report.

Also, UTSA and San Diego State will play in the Frisco Bowl.

Sunday, 3:01pm:  Army will play…someone in the Armed Forces Bowl.

Pumped to be performing the halftime show for the @barstoolsports Arizona Bowl on December 31st. LET’S DO THIS @stoolpresidente 🔥#arizonabowl #halftimeshow #collegefootball #newyearseve #epic #mustseeTV @BarstoolBowlAZ

Sunday, 3:13pm: Tennessee vs. Purdue in the Music City Bowl. Huh. Not used to seeing much orange in Nashvegas. Wisconsin, meanwhile, will go to Sin City to battle Arizona State in the Las Vegas Bowl. ‘Sconnies on the Strip? Yes, please!

Sunday, 3:15pm: The Holiday Bowl foe for NC State will be UCLA. Texas A&M will battle Wake in the TaxSlayer.

Sunday, 3:20pm:  North Carolina vs. South Carolina in yet another border war in the Duke’s Mayo Bowl.  Who’s your prediction for having a vat of mayo dumped on them after this one?

Sunday, 3:22pm:  Air Force vs. Louisville in the First Responder Bowl. We here at FBSchedules salute our armed forces and first responders everywhere.

Sunday, 3:26pm:  Miami will play Washington State in the Sun, while Virginia Tech gets Maryland in the Pinstripe. Also, Texas Tech will head to the Liberty Bowl.

Sunday, 3:36pm:  East Carolina has its Military Bowl opponent:  Boston College. West Virginia and Minnesota will square off in the Guaranteed Rate Bowl. At least there won’t be any jokes about that one being…fixed.

Sunday, 3:39pm:  The Fenway Bowl now has both participants — SMU vs. Virginia. Also, Houston vs. Auburn in the Birmingham Bowl.

Sunday, 4:15pm:  We appear to be done for the 2021 bowl schedule announcements. Thanks for joining me today — and for suffering through my jokes! Until we meet again…

Liberty has accepted bid to LendingTree.

Ohio State vs Utah in the rose bowl

Fresno State vs UTEP in the New Mexico bowl

Baylor in the sugar bowl

Michigan vs Georgia in Orange Bowl.
Alabama at Cincinnati in Cotton Bowl.

think the dissing of the Big 10, due to the last 15 years of poor bowl performances, could end. All Michigan has to do is beat Georgia, then play Alabama close, and will have to think at least Michigan can play with the best of the SEC, something missing for quite a while. Even a very good Ohio St team earlier this year, could not stay with Alabama. Now, that may have been the best offense in the history of CFB. Look at Jones, Harris, Waddle and Smith, and how they are doing, and I beleive at least one lineman was 1st team All-America, too. At least Ohio St.looked competitive for a while in that game. Time will tell if the Bears took the right QB, but if that turns out to be Jones, then this probably was the best offense in NCAA history. About every QB in the last 20 years would have loved to QB for that Alabama team, loaded with weapons, which is what got OSU, too many options to cover, sort of like the Chiefs when protecting Mahomes. Just too many options, can’t cover all of them on any given play, have to pick where you are going to be softer on D, and then, that can turn out very badly.

During yesterday’s Big XII title game, when speaking about the playoff picture, ESPN’s Sean McDonough only spoke about Cincinnati in the capacity of them losing the AAC title game to Houston; he did not speak of the result of Cincinnati’s playoff hopes if they won AAC title game.

McDonough didn’t hesitate namedropping Ohio State or Notre Dame (who lost at HOME to Cincinnati) and their playoff possibilities. It isn’t just McDonough; whatever ESPN producers tell most announcers to say about the CFP (the retired Mike Patrick would’ve been another shameless shill) they will follow suit. But I find McDonough to be particularly complacent about shilling.

There is weeping and gnashing of teeth among higher-ups in Bristol CT over Cincinnati not following ESPN’s pre-programmed script of keeping even worthy Group of Five universities out of the playoff picture. Now when Cincinnati as a #4 gets blown out no worse than Oklahoma was by LSU or Notre Dame wouldn’t been by Alabama, I dare ESPN to pull out the “this is what happens when a Group of Five school gets in the playoff” narrative. For the record, I believe Alabama will likely win the game by three TDs (though I believe will be a close first half).

Michigan v. Georgia could be one of the lowest scoring CFP games in its history. Both teams’ defenses are solid. Georgia proved that their two QB approach can be exposed. Michigan’s QB group might be very slighly better, but the Wolverines may have the tougher offensive scheme to defend.

Georgia doesn’t have a two QB approach. JT Daniels pulled a muscle in game one, tried to play the following week and then Stetson Bennett took over.