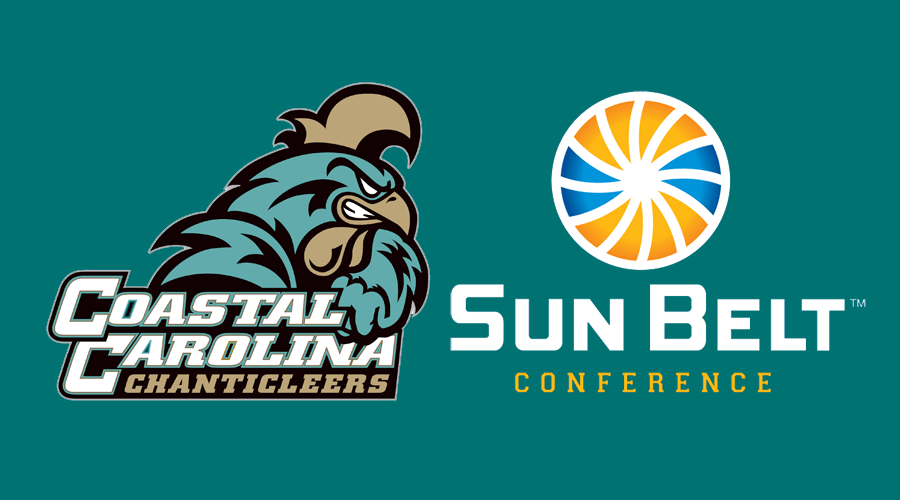 The Coastal Carolina Chanticleers will join the Sun Belt Conference in football beginning with the 2017 season, the school announced today.

“On behalf of all of us at Coastal Carolina University, I’m honored to accept the invitation to join the Sun Belt Conference,” CCU President David A. DeCenzo said. “I am grateful to Sun Belt Commissioner, Mr. Karl Benson, for his steadfast support of CCU, and to the Sun Belt presidents and chancellors, who honored CCU by selecting their 12th member school.”

The Chanticleers will be able to compete for the Sun Belt football championship in the 2017 season and can then participate in a postseason bowl game following the 2018 season.

Coastal Carolina, located in Conway, South Carolina, has been a member of the Big South Conference since they began playing football in 2003. The Chanticleers have won six Big South championships and have played in the FCS Playoffs four times.

“This is a great day for the Sun Belt Conference as we are very proud to have Coastal Carolina University join our membership,” said Sun Belt Commissioner Karl Benson. “The Sun Belt is a growing conference with a bright future and Coastal Carolina makes a perfect fit as they too have seen a tremendous amount of growth and have all the tools necessary to move forward at the highest level of collegiate athletics. Under the leadership of President David A. DeCenzo and Athletics Director Matt Hogue, I expect the Chanticleers to be competitive in all Sun Belt sports and to represent the conference in a first-class manner on and off the field.”

Coastal Carolina’s football venue, Brooks Stadium, currently seats 9,214. Upgrades to the stadium will begin immediately to expand capacity to the FBS minimum of 20,000.

The addition of Coastal Carolina will give the Sun Belt 12 football-playing members. The conference plans to split into East-West divisions and hold a championship game in the future. Below is the likely division setup:

Could Army and UMass go together to the current Conference USA. The American’s not going to happen anytime soon, and it’s obvious that’s what UMass wants. UMass didn’t want the Sun Belt anyway… however I’m sure many of the East division SB teams will gladly schedule games with UMass.

B12 is now the only conference in FBS without a CCG going forward.

Benson did not mention NMSU or Idaho in his speech at CCU yesterday. But mentioned all 12 full members and stressed geography that makes sense. Then Troy Shutle’s twitter report of Benson’s teleconference — @TroySchulteADG

Benson: We need to determine if we’re going to be a 10-team league or a 12-team league.

Benson: Football title game will be decided after season, when learn of NCAA ruling/status of Idaho/NM State.

Benson leaving the door open for a SBC without Idaho and New Mexico State as football members. Agreements are up for renewal after this yr.

Not good for NMSU and Idaho. We could have 5 FBS Independents in 2018. Seems UMass is about to pick up a couple November scheduling buddies.

I’m pissed. Coastal Carolina is a great fit for the SBC but guys why do you keep overlooking Jacksonville State. Surly they are just as deserving.

Because they’re in Alabama and unless you’re one of the Big 2 you really don’t bring any value. I’m sure they’d love more Texas teams but the market is also dominated by 2 with the 2 little brothers steadily picking up steam.

I think this is a smart move. The Sun Belt may be surpassing Conference USA and the MAC in the next few years.

thats the dumbest thing ive heard today….dirk! you really think THAT MANY SCHOOLS are gonna bump up to FBS…….Delaware state??? really dude? thats an HBCU they arent going anywhere…..get your freakin facts straight before you write something like that on here

Those schools would want to stay out Center/West for travel purposes. Take off UMass, Army, Delaware State, Richmond, Villlanova (they could go AAC if they wanted) and Chattanooga (most likely Sun Belt) and you’d probably have to add on University of North Dakota and Montana State.

And now you’re pretty much left with the FCS all stars, so throw in Eastern Washington, South Dakota State, and Cal Poly and you’ve got a 14-team league.

The real question is, Idaho and NMSU get to stick around and eventually be full members, or will the sun belt cut ties with them and if so, what FCS team would replace them?

Honestly NMSU needs to be a full memeber, and Idaho needs to go back to the big sky….but that’s none of my business

The Sun Belt is going to get rid of Idaho and NMSU, Karl Benson has intimated that recently.

I know it’s not going to happen, but I would love to see NMSU and Idaho replaced by Army and UMass (football only). That way the conference stays mostly east of Texas. Army and UMass have better media markets, better football tradition, and easier accessibility. Both schools could benefit from playing in an easy conference. It would give them increased access to talent available in the Southeast. Jeff Monken (Georgia Tech/Georgia Southern) and Mark Whipple (Miami) have ties in that part of the country. Army has a fanbase in that part of the country with all the bases that are down here. UMass has a history with App State and Georgia Southern. To me it would be a slight, but justifiable step up for the Sun Belt.

Idaho goes FCS after the 2017 season. NMSU will be an FBS Independent.