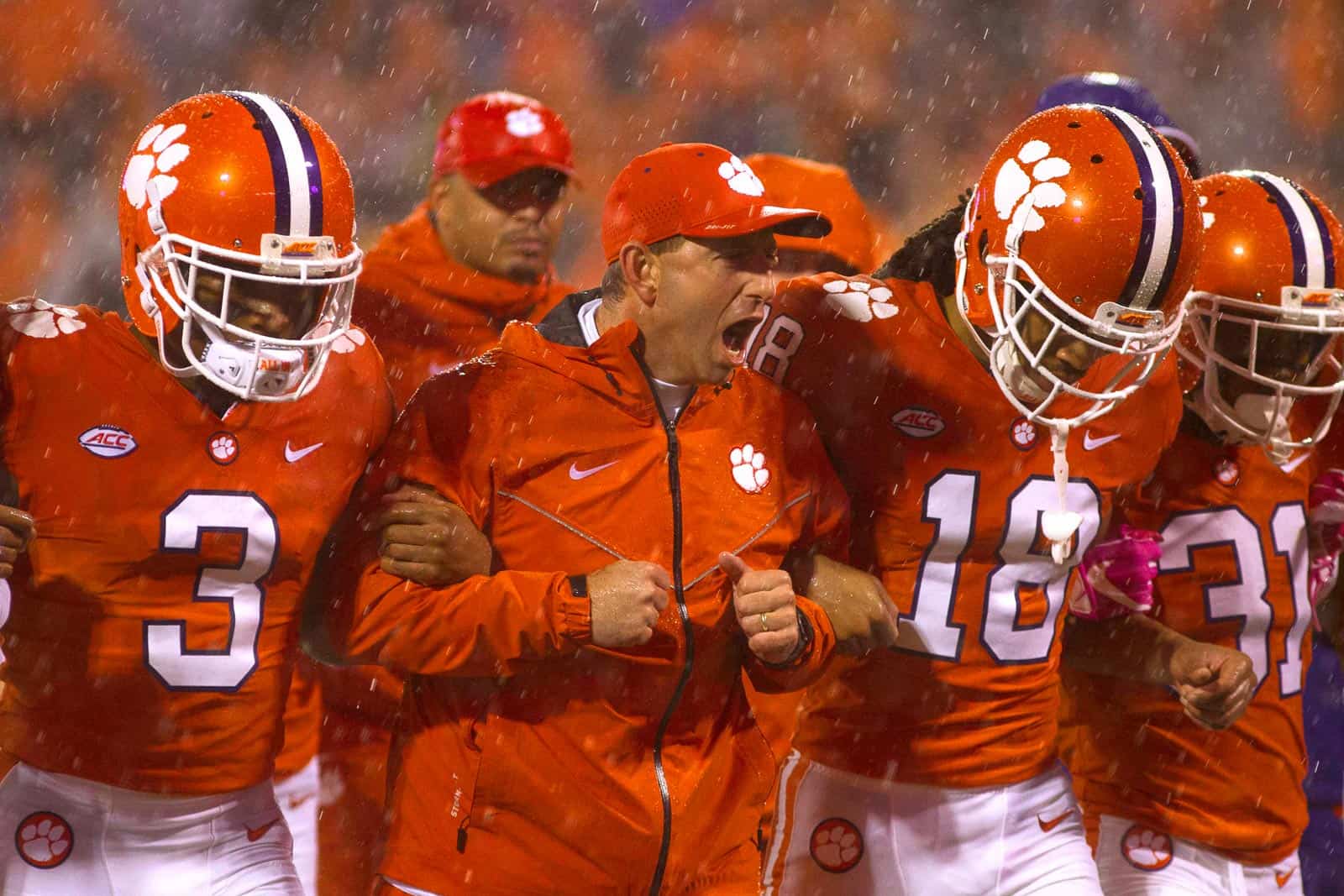 The Clemson Tigers and the Oklahoma Sooners have scheduled a home-and-home football series for 2035 and 2036, FBSchedules.com has learned.

A copy of the two-game contract was obtained from Clemson University via a state Freedom of Information Act request.

The home team will pay the visiting team $1 million for each contest and the penalty for breaching the contract is $2 million. Recognizing how far away the games are scheduled, Clemson and Oklahoma included the following language in the contract:

The Parties acknowledge the long-range nature of schedule planning and that games remain to be scheduled during the above years. Accordingly, the Parties agree to consider in good faith a modification in the date of a given year to accommodate other scheduling.

Clemson and Oklahoma have met five times on the gridiron, with the three most recent matchups coming in post-season bowl games. The Tigers won those contests 13-6 (1989 Florida Citrus Bowl), 40-6 (2014 Russell Athletic Bowl), and 37-17 (2015 Capital One Orange Bowl) and now hold a 3-2 lead in the overall series.

The Clemson-Oklahoma contests are now the furthest scheduled home-and-home series in college football, not including annual matchups such as Clemson-South Carolina, Florida-Florida State, Army-Navy, etc. or Notre Dame vs. ACC opponents.

The Clemson Tigers have also made some adjustments to two previously scheduled non-conference games for the 2022 season, according to copies of documents obtained from the school.

Furman was previously scheduled to visit Clemson on Sept. 3, but will now play the Tigers on Sept. 10. Additionally, Clemson’s game against Louisiana Tech has been moved up one week from Sept. 24 to Sept. 17.

Other games scheduled that season include at Notre Dame on Nov. 5 and South Carolina at home on Nov. 26. Barring any additional changes, Clemson will open the 2022 season with an ACC contest.

This is the best thing I’ll read all week

So much could change between now and then, why even schedule a game that far out into the future. Seems pretty ridiculous.

They couldn’t get something scheduled for 2030? Already booked, huh.

Most of us will be dead by then!!!

The starting quarterback for Clemson in the 2037 game will be born later this spring. The veteran senior quarterback for Oklahoma will be 3 years old next Tuesday and currently shows no interest in being potty trained.

Clemson’s 2nd year head coach is currently a sophomore in high school and will be getting his learner’s permit to drive this Saturday. Oklahoma’s coach, slightly older by 3 years is a freshman in college going through hell week at his fraternity and getting drunk on most weekends.

I will be 87 years old when the game in played in 2037, and according to the actuarial tables have a 35% chance of being alive for the game. I will, if alive and walking buy my tickets on Stub Hub the week before
unless they are only available on Amazon Prime..

First hear Clemson coach Trevor Lawrence, after winning a record 4 Heisman Trophies and 7 Super Bowls with the Buffalo Bills signed a 10 year $1.5 billion dollar contract with Clemson. He declined an escalator clause in his contract claiming that it would not be necessary.

Oklahoma coach Lou Holtz announced his retirement after a 7 year career with Oklahoma. He decided that at 97 years of age he was starting to slowdown.

Both teams enjoyed the series so much that they signed to play the following season on Labor Day in Moscow at the recently renovated Putin-Trump stadium. New York City Mayor Baron Trump will be the honorary con flipper before the game. (Baron will be eligible to run for President in 2044).

I think there is a good chance that both coaches will still be there. Dabo will be 66 when these teams first play, Lincoln Riley will be 52. Unless the pros or Alabama come calling after Nick Saban retires, wait Nick Saban will never retire.