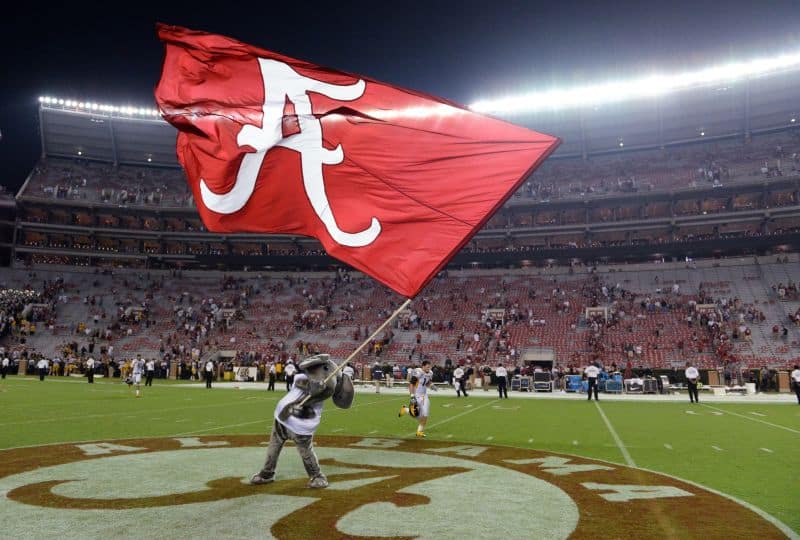 It may seem a bit much to call last week’s SEC action anticlimactic, but close games were not a common theme.  Vanderbilt finally put one in the left column, though there were many tense moments at the end of their contest.  Blowouts ensued in most other conference action, except for two specific games.

Kentucky lost to Florida 36-30 in a triple-overtime, er, questionable decision.  The conference seemed to double down on that decision when questioned by the Wildcats.  South Carolina clipped Georgia in a game in Columbia that seemed to take weeks to play, thanks to storms that affected everything from Friday night high school games to outdoor concerts.  These results left the SEC East in flux — again — while setting the table for the conference schedule that will soon arrive.

There are just eight games this week, and we’ll take a spin around the conference slate.  Before we do, though, it’s trivia time!

SEC Trivia, Week 4 (answer at the end of the column):  Which SEC school has posted the longest active streak without pitching a defensive shutout?

Program guide:  This is the week for defensive battles, and you’ll see that as you continue through this column.  The Gators and Crimson Tide are both renowned for their defensive prowess, though, and that will be on display this weekend in Tuscaloosa.  Both schools are in the top 15 in total defense, with just 20-and-a-half yards separating the two.  The Tide have led the conference in total defense each of the last six years, and are behind only LSU through three games this season.

The real focus, justifiably, is on Florida’s improved offense under the tutelage of Kurt Roper.  The Gators have played just twice, but rank behind only Texas A&M among SEC teams in total offense.  Florida is averaging 593 yards per game through their first two outings.  Quarterback Jeff Driskel has been particularly impressive when given the freedom to be more creative in the offense.  Driskel has completed 56 of his 88 passes for 543 yards, finding the end zone four times against just one pick.  That translates to a 128.2 passer rating.  Also, keep in mind that Driskel’s attempts per game are up over double from last year’s totals (20.3 last year, 44 thus far this year).

Alabama’s offense is still quite powerful — they rank third in the SEC in total offense — but there is still concern about the quarterback position.  Though Blake Sims has been really good thus far, in terms of numbers (48-for-64, 646 yards, 4 TD, INT), there still seems to be a prevailing notion among some Alabama fans that the old phrase of “if you have two quarterbacks, you have none” plays in Tuscaloosa, as well.  Sure, Alabama needs to mix in some more receiving weapons (Amari Cooper has 33 grabs for 454 yards and two scores, with no other ‘Bama receiver even in double figures in catches), but Sims’ worst (such as it is) performance came against Southern Miss on Saturday.  Even still, Sims completed 12-of-17 passes for 168 yards and two touchdowns.  T.J. Yeldon has only been needed for 16 total carries over the past two weeks, which also helps, though he is battling a mild hamstring issue.

Print that, tweet that, whatever:  This will be a much better game this year than it would have been last year.  It’s so tough to win at Bryant-Denny, however.  Close game.

Print that, tweet that, whatever:  K-State has won 44 of 46 September home games under Bill Snyder.  This will be a close one, but K-State must keep the ball away from Auburn.

Print that, tweet that, whatever:  An 0-3 Troy team facing off against an angry, hungry Georgia team in Sanford Stadium spells a horrendous outcome for the visitors.

Print that, tweet that, whatever:  A&M has won 44 of 80 games against SMU.  Though they were a bit sluggish at times against Rice, we’d be stunned if it weren’t 45 of 81.

Print that, tweet that, whatever:  Coleman is a stud, but Indiana lost to Bowling Green last week.  BGSU is fourth-from-last in total defense.  Bad news for IU.

Print that, tweet that, whatever:  Arkansas is a two-touchdown favorite, but don’t be surprised if the final is closer than that.  This will be a fun matchup.

Print that, tweet that, whatever:  As good as Dak Prescott has been, LSU owns a top-five defense by almost any measure.  This is also a night game in Death Valley.

Print that, tweet that, whatever:  Spurrier’s team looked really good against Georgia, but still has defensive concerns.  Those concerns shouldn’t matter in Nashville, but who knows.

Trivia answer:  I asked earlier:  Which SEC school has posted the longest active streak without pitching a defensive shutout?

(Author’s note:  There will be no Clear Your Schedules next week.  I will be taking the time to mentally reboot and reconnect, and I cannot suggest enough that you do the same from time to time.  Thank you so, so much for your continued readership, and we’ll catch up in Week 6.)

Look for the cream to rise to the top this weekend.I am looking for Bama,LSU,Tex A&M,and Auburn to begin to separate.These are 4 really good teams,and should be around the top of the pack come bowl time.
Great article,as usual.This is the premiere conference,no doubt.

If the SEC would just play a decent non-conference schedule, we’d know for sure whether they truly are the elite league.