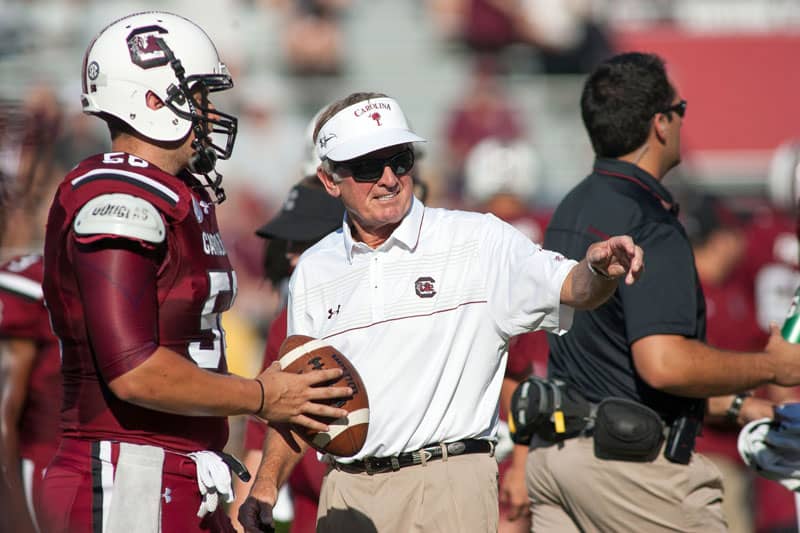 Week two of the SEC schedule has arrived, and while this week’s slate of games is — well, let’s just say they’re not last week’s games — there are still quite a few interesting storylines. Vanderbilt turned the ball over seven times in a loss to Temple last week, and as I pointed out on Twitter, the Commodores had a +7 turnover margin last year (30 takeaways, 23 giveaways). South Carolina experienced quite the opening-game struggle, as evidenced by this stat from intrepid Gamecock beat reporter Matt Connolly. Tennessee also had a tremendous opening victory, but it proved a bit Pyrrhic, as they lost a starter on an already-challenged offensive line.

We’ll be breaking down these storylines and much more throughout the remainder of this piece. We also have a new feature called “Print that, tweet that, whatever”, as explained in our ACC version of this weekly article. Off we go to look at the week, but first, it’s time for a trivia question!

SEC Trivia, Week 2 (answer at the end of the column): Alabama quarterback Blake Sims set the record for completions and attempts in a first game with the Crimson Tide in last week’s victory over West Virginia. Whose completions records did he break?

Program guide: To say it hasn’t been the best of weeks for the HBC is a dramatic understatement. Spurrier told reporters earlier this week, “Hopefully we can run around and show some fire and act like we really enjoy playing the game.” He also dubbed the loss “embarrassing” and immediately began the process of making changes.

Those changes are going to be vital when facing off against a Pirate club who was second in their final year in Conference USA in total offense, and shows no signs of slowing down this year. Star quarterback Shane Carden went 26-for-37 for 283 yards and three touchdowns against NCCU last weekend, bringing his career passing total over 7,500 yards. Carden’s next touchdown pass will also be the 60th on his career.

This offensive firepower presents quite the concern for a Gamecocks defense that had next to no pressure in the backfield in that A&M loss, and provided very little resistance against a dynamic passing attack. Dylan Thompson also needs to complete greater than the 50 percent of his passes that found the hands of Gamecock receivers in week one. Mike Davis is also expected to play, which should be a boost to a running game that saw no back gain greater than 45 yards and had a receiver as their third-best rusher, in terms of yards.

Of note: A Spurrier victory would place him at 200 as an SEC head coach, one behind Vince Dooley for the second-best total.

Tweet that, print that, whatever: South Carolina should right the ship this weekend. They should hope for their — and their worried fans’ — sake that they do.

Print that, tweet that, whatever: Alabama may have been a bit slow to get untracked against West Virginia, but should not experience the same against the Owls.

Print that, tweet that, whatever: I’m not as confident of an ASU victory as my colleague, but Michael Gordon and Fredi Knighten make the Red Wolves a factor.

Print that, tweet that, whatever: Toledo is just a 3.5-point dog, and is rarely out of a game with Campbell’s offense. Mizzou will have its hands full in the Glass Bowl.

Print that, tweet that, whatever: As impressive as UAB was in week one, they’ve won one road game against an SEC team. Ever. Don’t expect there to be a second this week.

Print that, tweet that, whatever: The Bobcats have a veteran coach in Frank Solich and a team that knows how to win. This is a new day for the Kentucky program, though.

Print that, tweet that, whatever: EMU had to scrape to defeat FCS-level Morgan State last weekend. This isn’t a favorable matchup for the Eagles. Florida’s favored by 37.5.

Print that, tweet that, whatever: Despite Arkansas’ second-half struggles last week at Auburn, one has to think Nicholls might be goin’ down (down, down) this week.

Print that, tweet that, whatever: How much difference can a week make? This game will be the first of many tests of Derek Mason’s coaching ability.

Print that, tweet that, whatever: The Spartans are no cupcake, but this is a highly unfavorable matchup on hostile turf for Ron Caragher’s team. They’ll compete, though.

Print that, tweet that, whatever: It’s really tough to find a scenario in which the Cardinals leave Kyle Field with a win. There’s always a chance, no matter how minute.

Trivia answer: I asked earlier: Alabama quarterback Blake Sims set the record for completions and attempts in a first game with the Crimson Tide in last week’s victory over West Virginia. Whose completions records did he break?

Former Alabama quarterback John David Phillips completed 17-of-29 passes for 188 yards in the Tide’s 38-31 victory over BYU on September 5, 1998. Phillips also connected on five extra points and a 34-yard field goal in that contest.

Extremely well written breakdowns of these various games.I am hard pressed to see an upset happening this week.Bama,SC,and Tenn.should all be playing with a chip on their shoulder.

Yeah, bad week for the SEC in games, I would think S.Carolina vs E.Carolina will be a gunslinger & Mizz vs Toledo may be a close one. All other SEC teams, enjoy the wins.