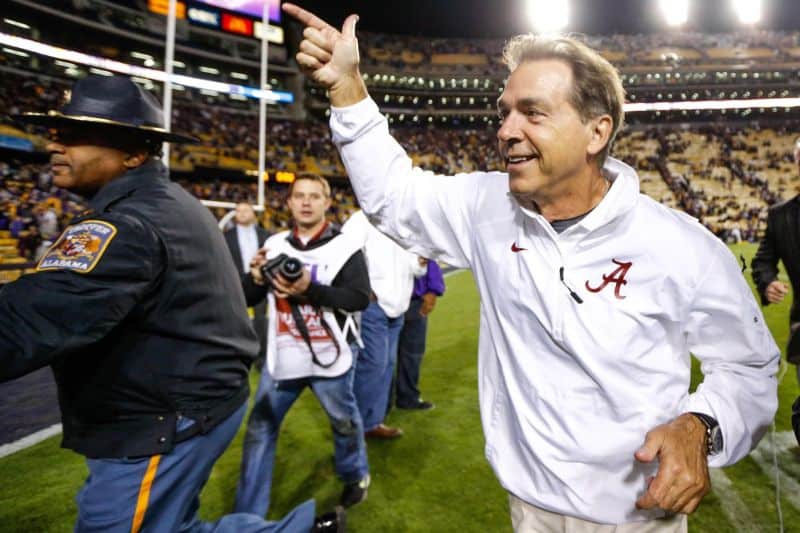 If you are a reader of our ACC version of Clear Your Schedule, you’ll know that I’m currently in “freak-out” mode over the fact that Thanksgiving is just two weeks away.  While I’m wondering where the heck 2014 went, there is still a lot to be decided in the SEC.  The debate continues to rage about how many — and which — SEC teams will end up in the College Football Playoff, but we don’t even know who’s going to Atlanta yet.  We’ll try to get all of that ironed out before another FCS invasion of the conference next week — before we do, though, it’s time for last week’s Three Big Things!

Before we move on to conference play, it’s trivia time!

SEC Trivia, Week 12 (answer at the end of the column):  Arkansas won the first Battle of the Boot played on its campus in 1992.  Who quarterbacked each team in that game?

Carve that, serve that, whatever:  South Carolina has to win two of three against Florida, South Alabama and Clemson to go to a bowl.  One has to come this week.

Carve that, serve that, whatever:  Alabama is rolling (pardon the pun), but don’t sleep on Mississippi State.  This should be one of the best games of the year.

Carve that, serve that, whatever:  A win makes Kentucky bowl-eligible — while snapping a considerable skid — and keeps Tennessee alive.  Huge stakes on both sides.

Carve that, serve that, whatever:  The home crowd in Athens should provide a boost to Georgia that they’ve missed for over a month.  Auburn has a huge challenge ahead.

Carve that, serve that, whatever:  Mizzou needs this win to nearly cement another trip to Atlanta.  A&M could become a player for a major bowl with a win.

Carve that, serve that, whatever:  Believe it or not, Arkansas is still in play for a bowl game.  Beating two of LSU, Ole Miss and Mizzou is a daunting task, though.

Trivia answer:  I asked earlier:  Arkansas won the first Battle of the Boot played on its campus in 1992.  Who quarterbacked each team in that game?

Barry Lunney was the starting — and winning — quarterback for the Razorbacks.  Former Atlanta Braves minor leaguer Jamie Howard quarterbacked for LSU.  Lunney completed 10-of-18 passes for 115 yards and a score.  Howard went 15-for-21 for 159 yards, throwing three rips.