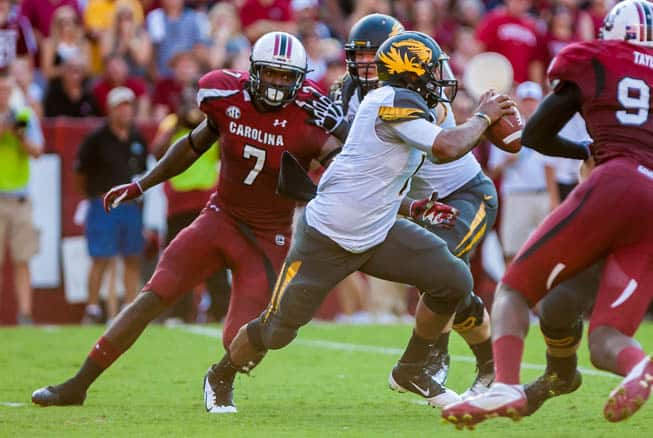 For all the drama that seemed to exist in the SEC East, all it took was a few short hours to almost completely eliminate that drama. Division leader Missouri throttled Florida’s top-three defense to the tune of 500 yards in a 36-17 victory. The Gators’ offensive performance (151 total yards, 3-15 on third down) was enough for coach Will Muschamp to call the unit “inept”. Losses in the Volunteer State by Georgia and South Carolina rendered both clubs’ chances to represent their division in Atlanta nearly nonexistent. A Missouri victory this week sends the Tigers to play for a BCS berth.

An LSU loss at Ole Miss and an Auburn victory in College Station means that, if all holds, the Iron Bowl will likely determine who heads to Atlanta from the SEC West. The Tigers have made incredible strides from their lost 2012 season, including hanging 615 yards of total offense on the Aggies at Kyle Field last week. Auburn still has four conference games remaining, including the Iron Bowl, so penciling them in for a December date in the Georgia Dome seems a bit presumptuous. The one thing we know is that there will be some electricity on the plains on November 30th, no matter what happens.

We’ll take a look around this week’s conference slate, but first, a trivia question!

SEC Trivia, Week 9 (answer at the end of the column): Georgia quarterback Aaron Murray completed 16 of his 28 passes last week for 114 yards last week against Vanderbilt, marking his third-lowest single-game yardage total as a Bulldog. What was his lowest single-game total?

Program guide: If this game had been played last week, there would have been a lot more consequence attached. This game still has a lot of meaning, however; either Missouri locks up a spot in Atlanta, or keeps the Gamecocks’ razor-thin hopes of a division title alive. South Carolina has just two conference games remaining after facing off against the Tigers (Mississippi State and Florida, both in Columbia), while Missouri gets Tennessee at home and travels to Kentucky and Ole Miss.

The Gamecocks will start Dylan Thompson under center in the “western” Columbia on Saturday night, as Connor Shaw recovers from injury. Thompson, who has experienced reasonable success in relief of Shaw in several outings, is 29-of-51 for 421 yards this season, with two each in the score and pick categories. Thompson has the benefit of Mike Davis lining up behind him. Davis leads the SEC in rushing (125.57 yards per game, 10 TD), and is the only back who averages more yards than Missouri’s run defense allows (116.57).

Missouri’s offensive performance against Florida last week was made all the more impressive by the fact that they only had 13 more plays on offense than did Florida. Maty Mauk’s passing numbers in the game may not seem all that impressive (18-of-36, 295 yards, one touchdown, one interception), but consider this fact. Florida had not allowed even a 200-yard passing effort this season, much less a nearly 300-yard game. The Tigers also got a 136-yard rushing game from Henry Josey, who joined Mauk in tallying touchdowns on the ground.

South Carolina absolutely must get Jadeveon Clowney up the field to put pressure on Mauk and force bad throws. The more comfortable Mauk can get, the more time he will have to read through his progressions and find his best option. Mauk has a number of lethal options from which to choose, as well. The Gamecocks rank 19th in the nation (third in the SEC) in passing defense, allowing just shy of 200 yards per game. Missouri has a chance to use the run game to soften the Gamecock defense and bring the safeties toward the box, with the hope of getting — and winning — one-on-one matchups.

Missouri, on the other hand, is considerably more adept at stopping the run (19th) than the pass (100th), last week’s game notwithstanding. South Carolina does not offer much in terms of big, physical receivers, but they do have playmakers in Damiere Byrd and Bruce Ellington. Both receivers have the same ability to shake man coverage and slip between the corner and safety help that Missouri’s receivers have, as well as the occasional habit of coming across the formation and picking up chunks of yardage against slower second-level defenders. If Missouri cannot get the run game untracked, they may have some opportunities to “extend” the run game with quick slant and stick routes to Byrd and Ellington.

Whether we know after the 60 minutes in Columbia who will represent the SEC East in Atlanta or not, the only regret we will likely have at the final whistle is that we did not get to see both clubs at full strength.

Murray was 11-for-31 for just 109 yards in a 35-7 loss at South Carolina in 2012. He averaged just 3.5 yards per attempt in the game. The Bulldogs posted 224 yards of total offense against the Gamecocks in the contest.

Things look like they are finally settling in from a standpoint of determining the championship teams.Missouri has made themselves a pretty strong candidate,and a win against SC will pretty much guarantee it.I still maintain that if I were Spurrier,Clowney would decide to play hard or sit down until draft day.I might get fired,but he has let his team down by his on again,off again antics.
Really good breakdown of games,key players,and key things to look out for.

(Oh, and I was referring to South Carolina extending their run game, not Missouri. My apologies!)

Missouri has 4 SEC games after the South Carolina game, shockingly Texas A&M is an SEC team.