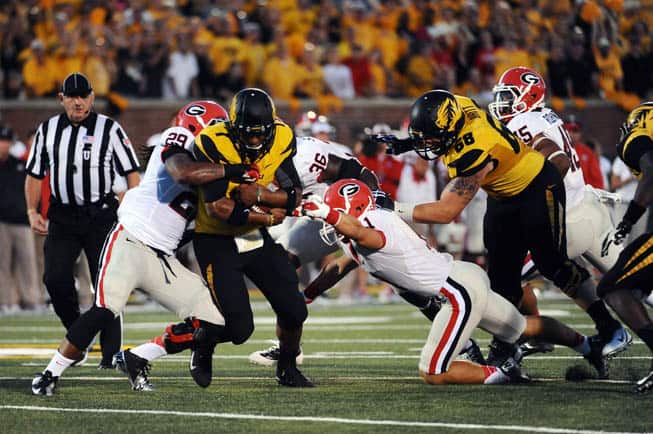 It seems as though there is always a week each year in the SEC where things almost don’t go according to plan. Last week made a bid to be that week. Georgia and South Carolina dodged bullets from lesser opponents, with Jadeveon Clowney again becoming the story in Columbia. Auburn scored a huge victory on the plains, leaving Ole Miss 0-for-Alabama. Arkansas’ once-hot start seems like a distant memory, while the struggles of Mississippi State and Vanderbilt continue.

Two conference unbeatens clash between the hedges this week, while Death Valley hosts another game with considerable consequences. Two non-conference opponents also make their way to SEC outposts, with one having a chance — albeit small — at pulling an upset. We’ll take a ride around this week’s conference games, but first, we present our weekly trivia question!

SEC Trivia, week 7 (answer at end of column): Alabama is 35-2-1 all-time against Kentucky. When did Kentucky last defeat Alabama?

Program guide: 2012 was quite the lost season for the Missouri Tigers. The squad’s maiden voyage into the SEC hit some bumpy seas, and some would suggest the boat capsized with losses to Vanderbilt and Syracuse. The sailing has been much smoother in 2013, though, with Gary Pinkel’s squad having notched as many wins to this point in the season as they did all last year. A 41-20 loss to the Bulldogs in week two last year got the Tigers’ SEC slate off to a terrible start, and Mizzou will look to avenge that loss this week.

Two of the top three offenses in the conference square off in this contest, and despite all the attention heaped on Georgia’s playmakers this year, Missouri actually has the edge in yards per game. The Tigers average just shy of 544 yards per game, with their lowest output of the year coming against Gary Pinkel’s former employer, Toledo (384). Mizzou hung 523 yards on Vanderbilt in last week’s victory, and much of the success of the Tiger offense can be attributed to having a healthy James Franklin on the field. Franklin ranks second in total offense in the conference at 337 yards per game, behind only Texas A&M’s Johnny Manziel.

Georgia quarterback Aaron Murray is just one spot below Franklin on that list, averaging 321.4 yards per game. It seems as though every playmaker available to Murray has been injured at one point, or is injured now. Todd Gurley, Keith Marshall, Michael Bennett, Justin Scott-Wesley and Malcolm Mitchell top the list of dinged-up Bulldogs, but Mark Richt’s club just continues to roll along. Last week’s game in Knoxville truly showed the signs of a weakened Georgia club, but Murray and his troops still managed to escape with a Volunteer-aided victory.

This game, as with several already having taken place this season, may come down to who records a key stop. Georgia and Missouri are ranked tenth and eleventh (respectively) in the conference in total defense. Georgia has allowed greater than 400 yards of total offense in every game this year except North Texas, while Mizzou has allowed greater than 400 in each of their last three contests. Missouri has the — granted, slight — edge in turnover margin, leading the conference with a plus-one margin. Georgia is even in turnovers. The Bulldogs rank dead last in the conference in points allowed per game (32.2), and a game in the forties is not out of the realm of possibility on either side.

Program guide: Florida’s evolution has been quite interesting to watch. Gone are the days of Steve Spurrier’s high-octane offense, with the Gators now becoming the premier defense in the league. Opposing offenses average just 217 yards per game against Florida, by far the lowest total of any conference institution. Florida extended their streak of allowing 20 or fewer points in SEC games to 12 last week in a victory over Arkansas. The Gator defense ranks second in the nation, behind only Michigan State.

The offense has evolved quite a bit under Tyler Murphy, as well. Murphy has completed well over 70 percent of his passes since Jeff Driskel’s injury, throwing for five touchdowns. Florida averages just 393.4 yards of total offense per game, only topping that total once with Murphy under center (402 yards against Kentucky). Gator running back Matt Jones was held to just 50 yards against the Razorbacks last week, though, and that stat needs considerable improvement against the Tigers. LSU’s rush defense is middle-of-the-pack in the SEC, so this is not out of the realm of possibility.

As great as Florida’s defense has been, LSU presents a number of challenges on the offensive side of the ball. The Tigers feature two top-20 performers in total offense, Zach Mettenberger (4th) and Jeremy Hill (17th). Wide receivers Odell Beckham Jr. and Jarvis Landry also rank third and fourth in receiving in the conference. Mettenberger is the reigning SEC Offensive Player of the Week after a 25-for-29, 340-yard performance in a victory over Mississippi State. Florida allows 152 passing yards per game, though they do draw the assignment of covering the national leader in all-purpose yards (Beckham Jr.) in this game.

Matchups such as these are often won by capitalizing on the few opportunities that avail themselves. LSU ranks first in the conference in red zone offense, converting 90 percent of their chances. Florida, however, ranks last in the category, scoring on just 69.6 percent of those chances. LSU has 22 touchdowns in the red zone, while Florida has managed just 11. The two teams are separated by just under three yards in average kickoff return yardage, while nearly identical in turnover margin. All signs point to this being a close game from beginning to end, with a late score likely being the deciding factor.

Trivia answer: I asked earlier: Alabama is 35-2-1 all-time against Kentucky. When did Kentucky last defeat Alabama?

As always,a really good recap of games and teams in this talented conference.It seems as though Ga.is in a highlighted game each weekend.Should they continue to win,they will keep themselves in a position to play in a major bowl,or perhaps the championship.One wonders how at least 4 teams in this conference would do in other conferences where they didn’t beat up on each other week after week.