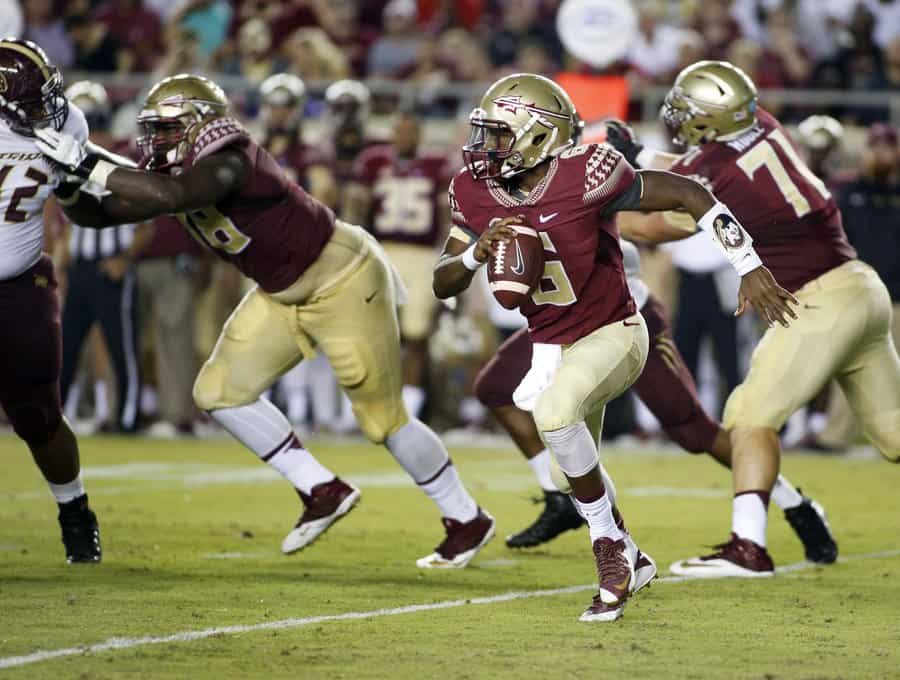 So hey, that was a fun week, wasn’t it? We’re through one week of ACC football, and we should only have a few more of these weeks where just about everyone in the conference plays someone who’s not in the conference. With 11 days down, it’s about time to start taking inventory. Let’s look back at that week in a newly-renamed feature we’ll call…

These Things We Know

With all of this said, we have another full slate of conference games to break down for Week Two. Before we do, though…it’s trivia time!

ACC Trivia, Week 2 (answer at the end of the column): Virginia lost their first home season-opener in the last five last year. Prior to that game, to whom did Virginia lose their home last season-opener?

Print that, tweet that, whatever: Florida Atlantic’s time is coming, but it’s not yet here. Miami, meanwhile, is looking ahead to Nebraska’s visit next week.

Print that, tweet that, whatever: This should be a fun one to watch, especially with USF’s upgraded offense. I’m not sure they can get past Everett Golson’s club, though.

Print that, tweet that, whatever: If you like offense, this is your game. A Houston victory would create quite the grumbling in Bobby Petrino’s direction.

Print that, tweet that, whatever: Clemson has a short week before a Thursday night game at Louisville. They could use a big win against a fellow spread offense.

Print that, tweet that, whatever: Of all the possible matchups to open the conference slate, this is the one to do so? Get your #goacc hashtags ready.

Info button: Howard had a tough outing in their opener, getting blanked by Appalachian State 49-0 in Boone. The Bison managed just 172 yards of total offense against the Mountaineers. Howard has earned one FCS playoff appearance (1993), and finished seventh in the MEAC in 2014.

Print that, tweet that, whatever: BC had a tough first game against FCS Maine, but the Eagles should cruise to 2-0 in this one.

Print that, tweet that, whatever: Tulane looks likely to start the season in the basement of the ACC. The problem? They’re part of the American, not the ACC.

Print that, tweet that, whatever: It wouldn’t matter if this were played in South Bend, Charlottesville, or on the moon. The Irish should win this one…big.

Info button: Furman enters this contest coming off a loss to one of their Palmetto State brethren, as then-number five (FCS) Coastal Carolina defeated the Paladins 35-32. Furman actually outgained the Chanticleers 525-488, though two costly turnovers burned the purple-clad home team. Coastal running back DeAngelo Henderson also played a role, rushing 15 times for 95 yards and a score, along with seven grabs for 129 yards. The Paladins and Hokies have played five times — all Hokie wins — but have played just once in the last 68 years, a 24-7 Hokie victory in 2008.

Print that, tweet that, whatever: Furman struggled to an injury-riddled 3-9 season last year, but is loaded with veteran leaders. Can Tech effectively pass without Brewer?

Info button: Much like their fellow MEAC school NC A&T (see below), the Eagles hammered an opponent from the CIAA (D2) in a 72-0 defeat of Saint Augustine’s in Durham last week. This was the Eagles’ first shutout in five years. Jerry Mack’s offense compiled 447 yards against the Falcons, adding touchdowns on a punt return and a kick return. NCCU has played just five FBS opponents since moving to the FCS in 2007 (three of those being Duke), allowing 45 points or greater in each of those games.

Print that, tweet that, whatever: The Eagles want all eyes in Durham on the maroon and gray. Duke looked as impressive as ever in throttling Tulane in New Orleans.

Info button: The Aggies play their second consecutive Triangle-area team, having waxed D2 opponent Shaw 61-7 in their season-opener. Rod Broadway’s defense suffocated Shaw to the tune of just five first downs and 44 rushing yards on 30 carries. The Aggies outgained the Bears 413-81. A&T last played an FBS opponent in 2006, a 41-point decision against Louisiana-Lafayette. Broadway is a 1977 graduate of North Carolina.

Print that, tweet that, whatever: The tradition of success is back with a vengeance in Greensboro. The Heels will look to fight out of a corner from last week’s loss.

Info button: The Colonels enter this one ranked 19th in the nation among FCS teams. Eastern Kentucky clubbed Valparaiso 52-10 in Week 1, holding the Crusaders to a mere 220 yards of total offense. Dean Hood’s club is projected to finish second in the Ohio Valley Conference. EKU is also second all-time in FCS playoff appearances (21), trailing only Montana (23).

Print that, tweet that, whatever: NCSU racked up 450 yards of total offense last week, but allowed 305 to Troy. EKU might even outperform the Trojans on defense.

Print that, tweet that, whatever: Losing your leader is a heck of a way for a new coach like Pat Narduzzi to start his career. Watch to see how the Panthers respond.

FCS opponent William & Mary defeated the Cavaliers 26-14 at Scott Stadium on September 5, 2009. The loss was the first of Al Groh’s final season as Virginia’s coach.

Did Virginia not lose to UCLA last season?

They did — I poorly worded the question. “Right church, wrong pew,” as they say here in the Southeast. :)

The question has been reworded. :)